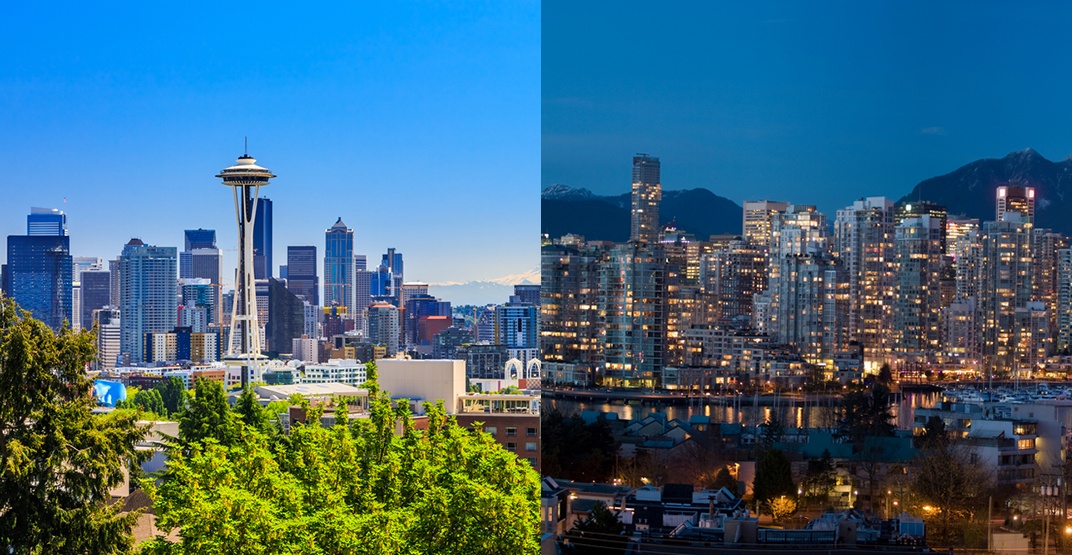 The downtown skylines of Seattle and Vancouver. (Shutterstock)

Despite new capital controls imposed by Beijing in recent years to reduce of outflows from China to foreign markets, some Mainland Chinese are still seeking safe places to park their capital, with many choosing foreign housing markets.

Globally-connected cities like Vancouver, Sydney, London, and New York City were at the forefront of these outflows earlier in the decade, but that is no longer the case.

“We are only 142 miles away from Vancouver and many of those buyers that once would have gone to Canada are now coming to Seattle as both more affordable and more appealing,” said Dean Jones, the president and CEO of Realogics Sotheby’s International Realty, who oversees the global real estate firm’s Seattle business and hundreds of agents.

“Vancouver is now far more expensive, burdened by foreign buyer taxes, and has less growth potential. I see Seattle as the new Vancouver. We are seeing the same growth with Chinese investors who have discovered our market as Vancouver had back in 2015.”

Jones highlights that while the total sum of cash seeping out of China has been curtailed by the Chinese government, less expensive housing markets like Seattle, Boston, Chicago, Miami, Dallas, and Orlando are benefiting.

Seattle, in particular, has the least expensive median home price on the West Coast of the United States, and more Mainland Chinese are also leveraging debt to make their purchase in the states, taking out mortgages instead of paying in cash.

The latest data from Northwest Multiple Listing Service indicates the median home price in the city of Seattle in June 2019 was USD $781,000 (CAD $1.018 million).

“The beneficiaries of Chinese demand also have changed. Markets like Canada that have imposed foreign buyer taxes are deflecting investors to other markets, like Seattle. This has played out over the last 20 years. It’s no longer the traditional gateways like Vancouver and New York that are the top markets,” added Jones.

“These secondary markets still have a long runway for growth. They are still a focus for Chinese buyers due to lower prices, economic vitality, and better fundamentals.”

Carrie Law, who is the CEO and director of Chinese real estate website Juwai, provided further context on how recent protectionist policies by US president Donald Trump have only slowed, not stop, demand from Mainland China.

She says the aggressive Trump rhetoric, trade war, and visa restrictions have had some impact on outflows; based on Juwai’s platform, buyer inquiries originating from Mainland China on US property fell by 27.5% from a year earlier.

Additionally, inputs in Mainland China have changed, with tighter regulations by Chinese authorities on commercial bank lending to control growing risks on the nation’s financial system. The growth of China’s economy is forecast to drop to 6.3% in 2019 from close to 7% in 2017.

Correspondingly, foreign buyers purchased USD $77.9 billion of US existing homes for the period from April 2018 to March 2019 — a 36% drop from the previous 12-month level of USD $121 billion, according to a new report by the US National Association of Realtors.

Much of this loss was from the drop in Mainland Chinese buyers, who acquired USD $13.4 billion in US housing, representing a plummet of 56% from the previous year.

But like in Canada, the Mainland Chinese are still the biggest group of homebuyers in the US market.

And for the seventh consecutive year, Mainland Chinese buyers were the largest group of foreign buyers in the US, followed by Canadians (USD $8 billion), Indians (USD $6.9 billion), British (USD $3.8 billion), and Mexicans (USD $2.3 billion).

Nearly one out of every five home properties in the US sold to a foreign buyer were generated by Mainland Chinese activity.

She also suggests a symbiotic relationship between developers and agents; most parts of the US housing market that rely on foreign buyers have no other alternative buyers other than those from Mainland China.

“There is very little chance that Trump will spell the end of Chinese investment,” said Law. “For many Chinese buyers, US real estate is not a luxury but a necessity. They are highly motivated to hedge the risks to their wealth by owning real estate in the world’s most developed economy. They are immigrating to the US or coming as expats at higher rates than the nationals of almost every other country.”

Law went as far to say that “what’s surprising is not that Chinese buying has fallen but that it is still so high. It turns out that Chinese demand for Canadian and US real estate can be hurt but cannot be killed — not by the trade war, not by foreign buyer taxes, and not by capital controls.”

If it were not for Mainland China’s self-imposed capital controls and the effects of Trump’s policies, she believes there would be “an avalanche of Chinese real estate investment” in both Canada and the US right now, similar to the levels experienced during the peak period of 2015 to 2016.

“Capital controls are not a tap that completely turns off the flow of cash escaping from China, but more like a constriction in the pipeline that reduces the amount that gets through,” she added.

“That is why Chinese residential real estate investment remains so high in the US and is actually growing in several other countries around the world.”