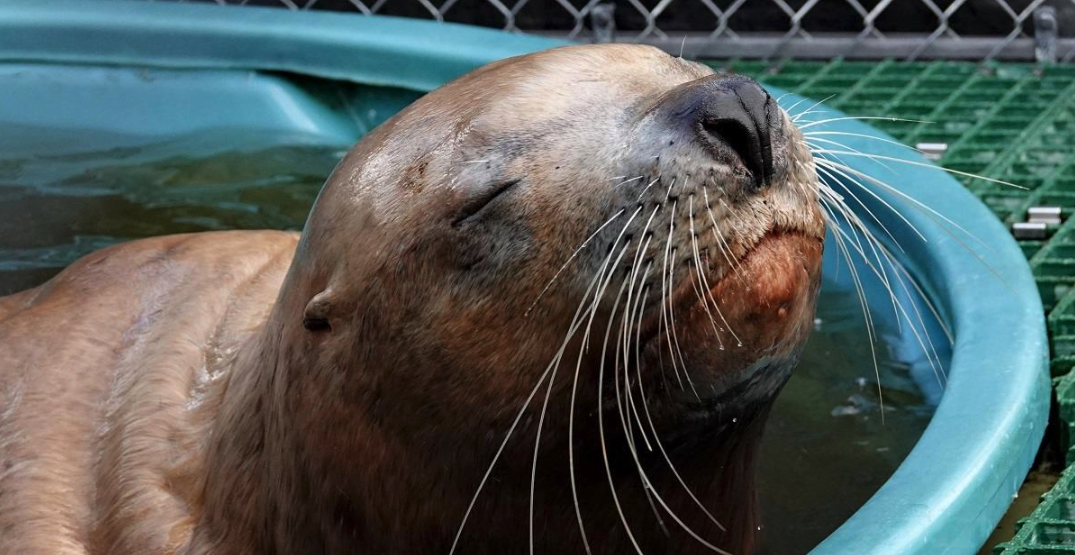 This sea lion was shot in the head near the Vancouver Island town of Uclulet. (Vancouver Aquarium)

For the second time in a year and a half, the Vancouver Aquarium Marine Mammal Rescue Centre has responded to a sea lion injured and suffering from gunshots to the head.

On Thursday, a team from the Rescue Centre flew and ferried to Ucluelet, on the West Coast of Vancouver Island, where an adult male Steller sea lion had been reported hauled out on a rocky shoreline, alive but unresponsive, for longer than a day.

It took a team of seven personnel from the Rescue Centre, staff from the federal Department of Fisheries and Oceans Canada (DFO), Parks Canada, local volunteers, a truck and crane from local company Windsor Plywood, and a cargo van to rescue the animal.

Even severely emaciated, the animal is the biggest ever admitted to the Rescue Centre; Steller sea lions are the world’s largest sea lion, with adult males reaching lengths of three metres and weighing up to 800 kgs.

Dr. Megan Strobel, Vancouver Aquarium Veterinary Fellow, said preliminary exams showed at least one bullet lodged in his skull. Although a complete diagnosis can’t be made until the team is able to sedate and examine him, she said the animal is possibly blind, and would have been unable to forage for food.

She estimated his current weight at about 300-350 kgs, well below a healthy weight for an adult male Steller; he is possibly about eight to 10 years old.

“He’s very skinny, very lethargic,” she said of the animal, now named Ukee after the town where he was rescued.

“Over the weekend, we treated him with supportive therapy, fluids and medication. This week, we’ll do x-rays and ultrasounds and get a better idea about the extent of his injuries.” He is still in critical condition, and won’t eat fish offered to him, but the team was encouraged when he went in and out of his pool during the weekend’s warm weather.

“We’d like to share our appreciation for the community of Ucluelet,” she added. “It was a challenging rescue, and we couldn’t have done it without them. Even the police chief was there and offered up his vessel if the animal went in the water after receiving an injection to sedate him.”

Ukee is the second sea lion admitted to the Rescue Centre with gunshot wounds in a year and a half. In May 2017, Senor Cinco, an adult male California sea lion, was rescued from Spanish Banks beach in Vancouver.

He’d been blinded and his teeth broken by multiple gunshots; unable to forage and feed himself, he was severely emaciated.

After a year of rehabilitation at the Rescue Centre, Senor Cinco was deemed non-releasable by DFO and moved to his long-term home at the Vancouver Aquarium.

“This is clearly a serious animal welfare issue,” said Dr. Martin Haulena, head veterinarian at Vancouver Aquarium. “It is unacceptable to shoot sea lions. Based on his body condition, this individual has been suffering for many weeks.”

Haulena said members of the public who called in to report the animal did the right thing: “Sea lions are large, wild animals and can be unpredictable.”