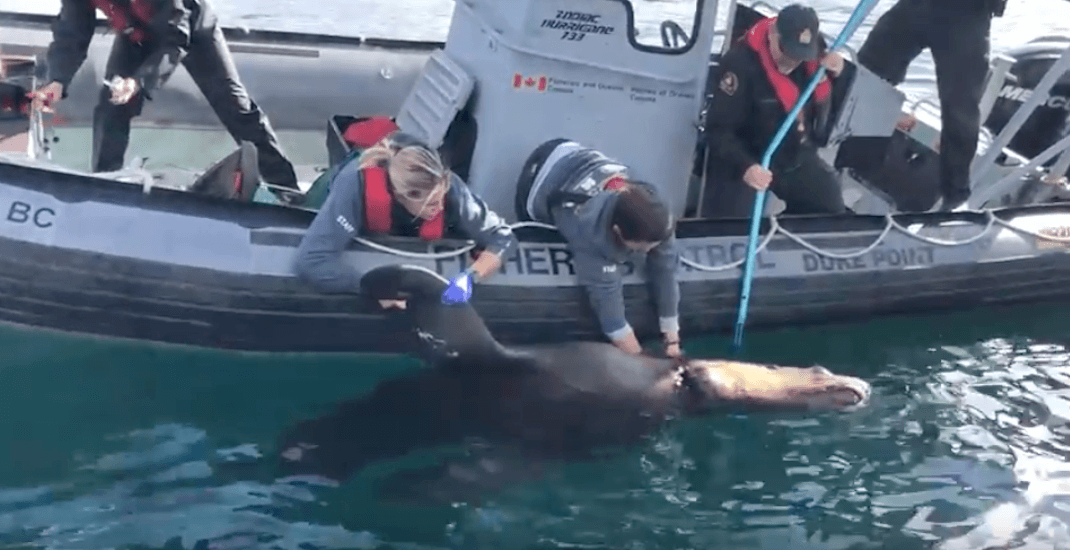 A 500 kg Stellar sea lion was rescued this week after being entangled in plastic garbage in a marine protected area off the coast of Vancouver Island.

According to a release, Vancouver Aquarium Marine Mammal Rescue staff, officers from Fisheries and Oceans Canada (DFO), and a veterinarian from the SeaDoc society joined together to rescue the distressed sea lion at Race Rocks Ecological Reserve, near Sooke.

Crews say the sea lion had a plastic band wrapped tightly around its neck.

“The depth and severity of the wound indicated that the plastic had been there for some time,” said the Vancouver Aquarium Marine Mammal Rescue Centre.

Race Rocks is made up of rough terrain and the area the sea lion was stuck was difficult to access. It took crews several hours of jockying positions, before Martin Haulena, head veterinarian at the aquarium, was able to successfully sedate the sea lion using an air-powered dart.

After being darted, the animal went into the water, which is a common reaction, according to Lindsaye Akhurst, manager of the Aquarium’s Marine Mammal Rescue Centre.

Crews located the sea lion in the water and removed the plastic, which had cut approximately two inches into its neck.

Akhurst says in recent years, BC surveys have documented hundreds of sea lions entangled in plastic nets, ropes, and discarded trash. These entanglements can result in death.