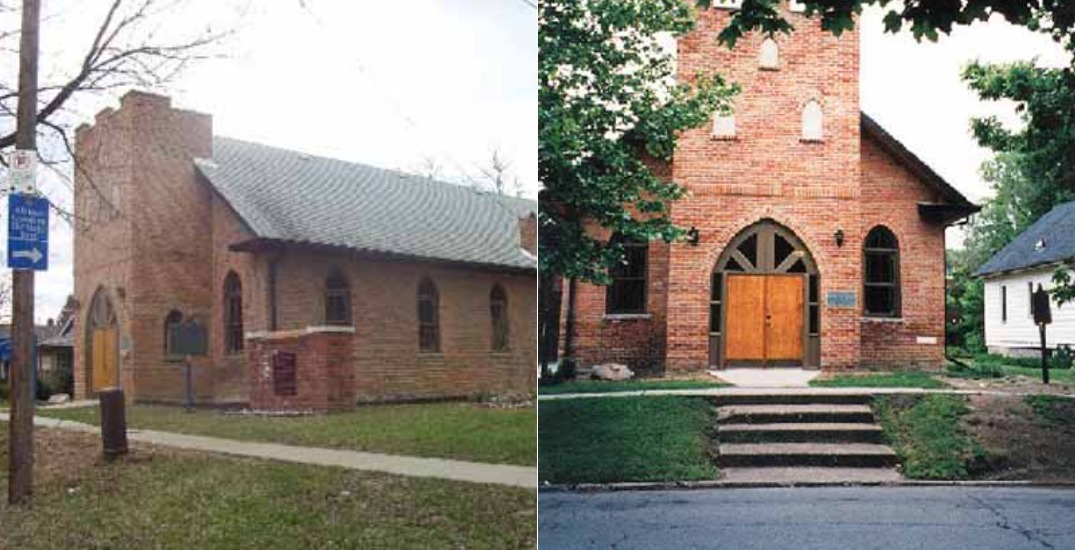 One of the oldest Black churches in Canada is located in Ontario, and it was part of the Underground Railroad network.

Sandwich First Baptist Church is in the Sandwich neighbourhood of Windsor, just under four hours outside of Toronto. The church, now over 180 years old, is one of the oldest Black churches in the entire country, and it is still active.

But the church’s history, as we know it, started before its 1851 build date as a little log cabin where Black people could practice religion. Because of segregation laws in Canada, Black people couldn’t go to church with white people.

“There were Black people that were never allowed to practice religion, or be so-called-Christians with the white people, so they had a little log cabin, and that’s where they started to serve the Lord,” Lana Talbot, heritage co-ordinator at Sandwich First Baptist Church told Daily Hive.

As the congregation began to grow, so too did the number of Black people arriving in Sandwich. Talbot said that more and more enslaved people arrived through the Underground Railroad beginning in the 1840s. The numbers grew even more in 1850 with the passage of the Fugitive Slave Act, which allowed for enslaved people to be captured and returned to enslavers.

By this time, Sandwich First Baptist Church had grown from the original log cabin to a larger two-bedroom cabin.

In 1847, Isom Thompson, Henry Grant, and Henry Turner were granted a crown patent by Queen Victoria to build a church on about an acre of land.

In 1851, the first cornerstone of the church was laid, and the congregation came together to erect the building. The bricks were made from clay pulled from the Detroit River, and freedmen and runaway slaves put the church together brick by brick. Once it was completed, Reverend M.J Lightfoot was chosen as pastor.

“In 1851, they built the sanctuary we now worship in, even as I speak, to this day,” said Talbot.

The church, a sanctuary now, was even more so back then. Abolitionists helped fugitive slaves hide in the church. When bounty hunters made their way into town, the church would pull out all the stops to protect their congregation and the enslaved people who escaped to Sandwich.

“When the people in the Sandwich area saw [bounty hunters] in the area, what they would do is they would either tie something on a post or ring a bell,” said Talbot.

At the sound of the bell, the pastor of Sandwich First Baptist Church would lock the door, and refugee enslaved people would hide underground, in a sort of secret compartment of the church. Talbot said that when the bounty hunter knocked on the church door, the pastor would sing the hymn “There’s a Stranger at the Door,” and the parishioners would join in.

“A bounty hunter could come [to] walk through, do what he wanted to do, but he couldn’t find anybody,” Talbot said.

A trapdoor allowed for the enslaved people who escaped to Sandwich to remain hidden and escape from the bounty hunters. Talbot said that there’s still a place near the entrance of the church where you can feel the floor sink under your weight. This is where she believes the trapdoor was located.

As more Black people fled the US for Canada, Sandwich became a part of the Underground Railroad network. The Underground Railroad has nothing to do with trains. It was mostly travelled on foot. The network used railroad-related codes to throw authorities off. “Stations” referred to hiding places along the network, “conductors” were guides, and “station masters” were abolitionists who helped hide slaves.

Abolitionists on the Underground Railroad used a number of codes to communicate with each other.

Notable Sandwich residents Henry and Mary Bibb used their newspaper The Voice of the Fugitive to gain support for the anti-slavery movement. They would share advice for Black people hoping to flee to Canada, and Talbot said he included code in the paper.

“All his codes would go back to the United States, especially to Boston,” she said. “He would always say, oh, here in Sandwich, we received such and such hens, and we received so and so chickens, but we didn’t receive the roosters that were supposed to come, and that’s telling you they receive women and children but no men.”

Eventually, his printing press was burned to the ground, but it didn’t take the paper out of print for long. Bibb continued to publish the newspaper until he died in 1854.

Other notable figures who made their way through Sandwich are Harriet Tubman, Frederick Douglass, and Mary Ann Shadd Cary.

Now, Talbot hopes to start an Underground Railroad museum at the church to honour the legacy and the history of the Black people who came through those doors and helped build that church from the ground up. The church recently received $100,000 in funding to fix up the auditorium and offices.

“There’s a lot of work that needs to be done,” she said. “And we do need to fix something to preserve our windows; our windows are really gone bad.”

They also have a Patreon and are accepting donations to create the museum. The plan, Talbot said, is to have the museum in the church auditorium so when people leave the church, they can go right into the future museum.

“It brings joy to my heart to know that I can teach my history because my history has been negated from history,” she said.

An often overlooked and ignored part of Canadian history is the slavery that happened here. Slavery in the British Empires was abolished in 1834, but Talbot believes people still held slaves. Whether they were rebranded as servants or hidden away when authorities came knocking, she’s not convinced that slavery ended as suddenly as the textbooks tell us.

“There’s there’s so much that people have no idea about,” she said. “But you want them to know.”

If you are in the Windsor area, and pandemic-related restrictions allow for it, visit this historic church and learn more from Talbot. She wants everyone to feel welcomed in the church that so many saw as a refuge.