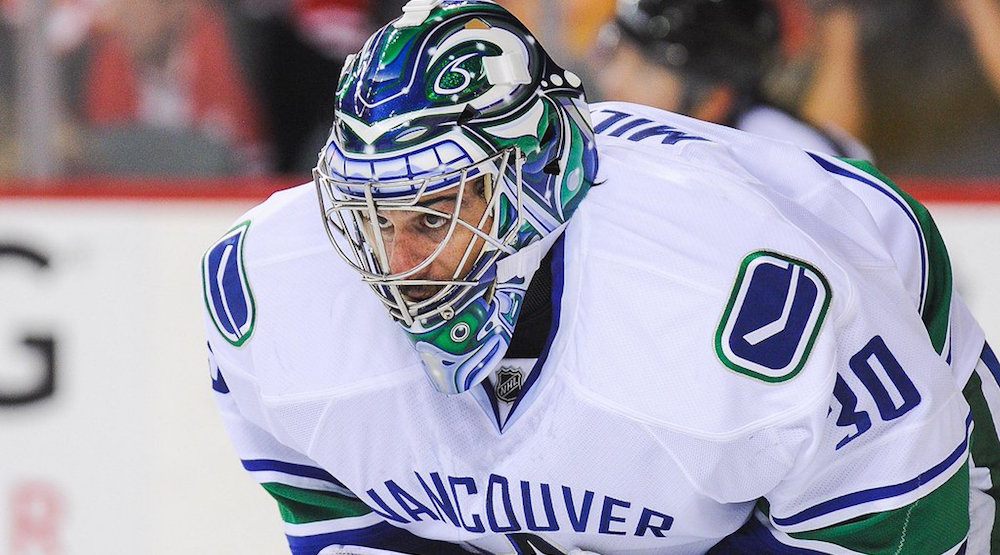 Ryan Miller is having himself a pretty good season between the pipes for the Canucks this year.

For him, it’s great timing.

The 36-year-old is in the final year of a three-year, $18 million contract that he signed as a free agent in 2014. This season has been his best in Vancouver.

Last year, Miller’s numbers were comparable to Markstrom’s, with the veteran goalie posting a .916 save percentage, backstopping an underwhelming group.

Ryan Miller's mostly provided the expected consistent goaltending when the #Canucks signed him & Thursday he hit the 10-shutout mark on VAN pic.twitter.com/978Z7cyuXC

After shutting out the Blue Jackets with a 33-save performance on Thursday, Miller’s numbers have improved again. He’s arguably been the team’s best player this season, posting the 11th-best save percentage (.918) among starting goalies this season.

In many ways, given his age, Miller is playing for his career as a starting goalie right now. Were he to have an off-year, getting a starting job next season would prove difficult. But he’s making a great case for the Canucks, or anyone else for that matter, to put faith in him to lead their team for at least another season.

Taking a look at the number of goaltending crises around the league (Calgary, Winnipeg, Dallas come to mind), there will be a landing spot for the native of East Lansing, Michigan.

The question then, from a Canucks perspective, is how realistically Vancouver is looking at bringing him back.

“He’s been outstanding, he’s had a great year. I think he’s really anchored our group,” Trevor Linden said on TSN 1040 Friday morning. “I certainly wouldn’t rule out Ryan coming back, it’s a situation that we’ll look at the end of the year and see where we are and see where Ryan is. He’s been everything we could ask for, for sure.”

There’s more than one way to take that comment, but for me, it’s an indication that Miller will be too expensive for the Canucks’ pocketbooks. Linden was complimentary, but he essentially said ‘we’ll see’ about his future.

Kind of reminds me of the comments on Dan Hamhuis and Radim Vrbata before last season.

“We’re going to go into the season and see how it goes,” GM Jim Benning said at the time.

With Jacob Markstrom’s new contract about to kick in, carrying a $3.667 million cap hit, Miller will need to be cheap for Vancouver to continue with a reasonably effective goaltending platoon.

Is Miller willing to take less than $4 million on a one-year deal to stay with the Canucks? If the answer is yes, then I think we could see a new contract post-expansion draft. But given where the Canucks are at in their evolution as a franchise, it makes more sense for better teams to outbid Vancouver, both in dollars and in term, to get a proven commodity in net.

The plan should be to eventually hand over the reigns to Markstrom, who they trusted enough to give a multi-year deal last year, and that becomes more difficult if the former Vezina winner is looking over his shoulder.

The expansion draft does muddy the already murky water of the goaltending market though, as a larger than usual goalie shuffle will occur this summer. Pittsburgh will likely trade Marc-Andre Fleury, rather than losing him for nothing. Vegas will get three good goalies – one more than they’ll carry – and should be in the market to make a trade.

The Canucks are currently six points away from a playoff spot, and would be well served to get something in return for the pending UFA, but I wouldn’t hold your breath. Reading the tea leaves, it doesn’t sound like there’s much of an appetite with management to trade Miller.

Miller isn’t a spring chicken, but this season will give teams faith that there’s still gas left in the accomplished goalie’s tank. Just plan on that being with Dallas, Calgary, Winnipeg, or Philadelphia next season, instead of in Vancouver.