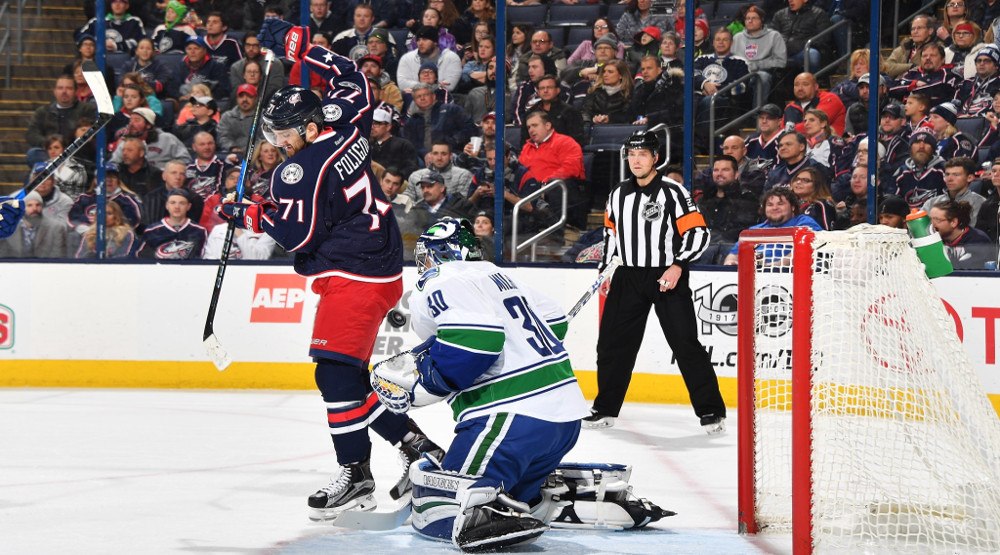 We’re at the point in the season where if the Canucks win a game you kind of shrug your shoulders and go “Ok?”

It’s like someone telling you they bought toilet paper earlier in the day. “OK, sure, that’s a thing that happened. Thank you for letting me know. I don’t know what to do with that.”

The Canucks currently sit 10th in the West. They’re six points out of a playoff spot. Certainly not an impossible task to make it. But if you’ve watched the team this season, you’re not exactly getting the feeling that if they manage to make the playoffs, “watch out, because this team is going to take off!”

“Megna, I’m telling you, that guy is going to take this team places. He’s just finding his stride!”

It’s not a bad thing to cheer for playoff hockey, of course. Many fans want to see that happen. Those are the fans that dislike dour people like myself. It’s just there is a fear that with the trade deadline coming, the Canucks won’t use their assets properly in hopes of a playoff run. They’ll hold onto players they could have turned into draft picks. Worse, they’ll trade for a player to bolster a run. Somehow convince Mark Messier to come out of retirement.

So yes, the Canucks won a game. They beat the Blue Jackets 3-0 tonight. But they have a tough schedule ahead of them. It is not an easy road to make the postseason.

The Canucks just bought some toilet paper is what I’m saying.

#Canucks move to 9-1-2 in their last 12 visits to Columbus, as Ryan Miller passes Cory Schneider for 5th most shutouts on VAN all-time (10)

That Megna, he is going to take the Canucks places, he is just finding his stride!

Yes, that is Jayson Megna. His brother is named Jaycob. Their father’s name? Jay.

I kid you not.

Megna, from House of Jay, had a game Willie probably loved. He scrummed away along the boards. He skated really fast in straight lines. And he got that admittedly beautiful goal, to put the game away in the third period. That was an EA Sports breakaway goal if ever there was one. “S” deke for days.

Jayson Megna: you can't stop him; you can only hope to contain him. #Canucks

Also, can we talk about that Jeff Brown-like pass from Troy from Richmond? Amazing.

Willie has seemingly long loved the idea of Megna as a second liner, so tonight’s game will probably be replayed many times by the coach. Yes, his Corsi was awful (33%, but that could also be the Sutter effect, who was at 30%), but that goal! If Sutter knows one thing, it’s how to score goals, and give up lots of shots against, so who better to teach Megna than him?

So now Megna joins the long line of “fast, speedy players who occasionally get a nice goal”. Mason Raymond is your President. Emerson Etem no longer the rookie in the club.

Welcome Jayson. We shall enjoy your season or two here.

Tryamkin got to play with Hutton tonight, which was glorious because it’s fun to watch him play with anyone that isn’t Biega or Larsen.

Hutton, who has had a rough season so far, looked good with Tryamkin. They had a couple of spots where they gave up some good chances, but on the whole, they played well together. They passed the puck back and forth to create zone exits and made it look easy. Corsi-wise they were the best pair on the night, and as you can see there, Tryamkin was his usual giant self.

Tryamkin just threw Jenner to the ground in the most casual manner possible. Like it was nothing. Because it was.

Now, once Hutton and Tryamkin figure out how to hit the net with their shots, this pair might really take off. It was shinguard city for the pair most of the time, but still, they did look good playing together.

And all it took was Baertschi being injured for him to get back in the lineup.

Boucher's played least of any #Canucks fwd through 2 periods at 5:14. #NoTrust

How many minutes did he get? Well, not much. Seven minutes total. Can’t take away ice time from Megna, so Boucher will have to bide his time. You never know, maybe enough injuries will occur to let him break 10 minutes in a game before the end of the season.

It’s still super tough to tell what the Canucks might have in Boucher due to his limited appearances and minutes. But the fourth line generated chances when they got their shifts, and actually led the team in Corsi.

It’s just nice to have a dream of a fourth line that can score, and Boucher has shown he might have that in him at the lower levels of hockey.

Coach Willie, he of the iron clad lineup that couldn’t be messed with several weeks ago, made the shocking move of putting Granlund with the Twins.

Well after the game, Coach Willie got the last laugh.

Game 54: this is the first time Daniel Sedin and Loui Eriksson have scored in the same game for #Canucks

Granlund played well with the Twins. He forechecked hard and harassed the Blue Jackets into turning over the puck. He just kind of threw the puck on net at times, one of which led to a goal from Daniel Sedin. He kept things pretty simple to be honest.

It was remarkably similar to the game plan Burrows followed for many seasons. Get the puck to the Twins and shoot/go to the net.

Now, this was your typical “good road game” (ie. score a goal or two, hold on for dear life and pray you bore the home crowd to death), so we didn’t get to see this line go for it much past the first period. But they certainly earned themselves another game together to see what else they can do.

The Sedins like to help out with charities, and in this case, it was nice to see them help out Loui Eriksson by gifting him a goal.

Eriksson, the expensive free agent signing who isn’t exactly lightning the world on fire, has struggled to score goals this season. He’s been robbed at times. Hit the post on others. Missed some easy looks. He’s had a run of bad luck.

The Sedins, being the giving people they are, realized he needed a tap-in. So they provided it.

Not many people would have missed that goal. Well, maybe Patrik Stefan.

Still, it’s always nice for the Twins to remind the world of the dominance they can bust out. Yes, it doesn’t happen as often as it used to, but it was a nice glimpse into what makes these two players such elite hockey players.

“This is not the pass you are looking for.”

You know how you end a hockey article?