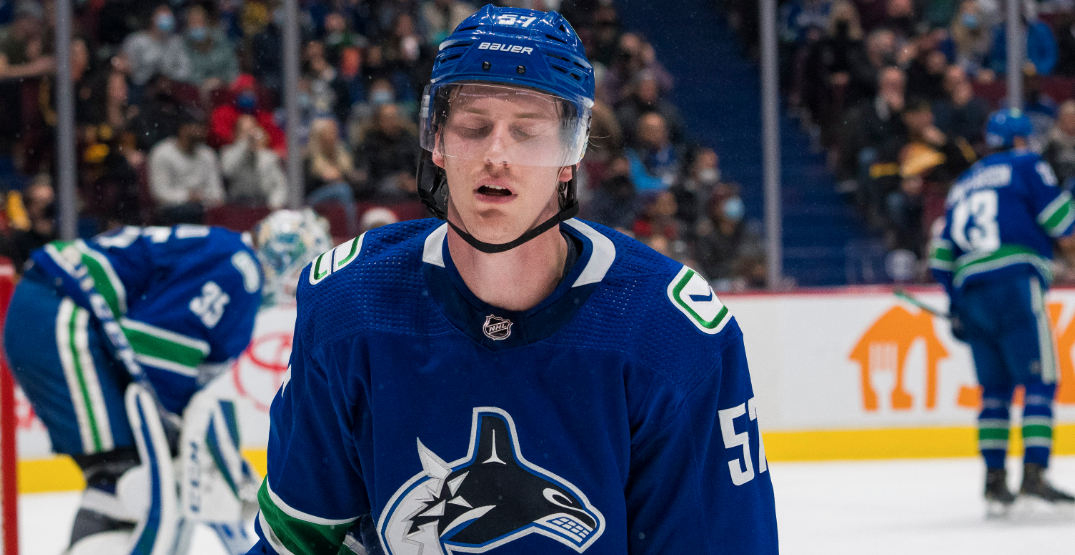 Things haven’t exactly gone according to plan this offseason for the Vancouver Canucks.

With the Canucks’ new management team stating that it wanted to clear cap space and with J.T. Miller very much on the trade block, big changes were expected. Jim Rutherford reportedly wanted to make a splash, to break up the “country club.”

More than two weeks clear of the start of free agency, the Canucks have barely made a ripple.

The Canucks did add a top-nine forward by winning the Andrei Kuzmenko sweepstakes. They probably overspent to get Ilya Mikheyev, though the former Leafs winger does add much-needed speed to the lineup. Curtis Lazar, a right-shot centre, will fill a need on the fourth line.

But Vancouver’s defence is identical to the group that finished last season.

That’s a problem, because defence isn’t a strength of the Canucks, and Rutherford knows it.

In an interview on The Bob McCown Podcast this week, Rutherford admitted that this offseason hasn’t gone as planned.

“We need to do more than what we’ve done, but you can only do things if you have a partner to do it,” said Rutherford, alluding to the difficulty in making trades with so many teams facing salary-cap challenges.

“We felt that we needed to get more balance with our forwards. I believe that we’ve done that. We have to address our defence, which has been harder to do in the offseason.

“There were some defencemen available in free agency — it didn’t work for us, whether it was term or what they were looking for. It appears that it’s going to take longer to address the defence than we would have liked. We’re going to have to do it through trades.”

The Canucks would surely love to add a player like Klingberg, but the Dallas Stars defender doesn’t appear to be a fit contract-wise.

“We were not in a position to go after a player like [Klingberg],” said Rutherford. “But, looking for a right-shot defenceman would be ideal right now.”

Other right-shot defencemen available in free agency include Anton Stralman, who played 21:20 per night with the Arizona Coyotes last season, and P.K. Subban, who played 18:18 with the New Jersey Devils.

Stralman turns 36 on August 1, while Subban is 33 years old — so both players are clearly past their respective best-before dates.

Rutherford appeared to try to talk himself into Jack Rathbone and Tucker Poolman, so that tells you where they’re at right now.

“Our defence right now is good enough to win, but there’s question marks there. We’ve got Rathbone, who’s a young player that’s tracking in the right direction, deserves the opportunity to be in Vancouver this year. If he comes in and plays the way he did in the American League last year, and stays healthy, that’s going to improve our defence.

“The big question mark is Poolman. Poolman when he’s playing without any injuries is a good, solid defenceman, can actually play in our top four. But, there’s question marks around his health. That’s going to be something we’re going to have to watch.”

Poolman missed more than two months of hockey last season, after suffering a head injury on January 27. He returned on April 3 but exited the game after just 4:25 of ice time. He finished the season with just three points (1-2-3) in 40 games, playing 17:00 per game.

Rutherford says he is concerned with D Tucker Poolman head injury but he has worked hard and progressed.

I have been told, there have been no setbacks this summer for Poolman.

“If all those guys stay healthy, our team is strong enough to be a playoff team. But if something goes wrong on that defence, which we know could, that’s going to be an issue.”

This, clearly, is not Plan A.

“We’ll continue to look at our defence, we’ve got to rebuild that right side, get younger over time. We’d like to do it today, those opportunities aren’t there. It always sounds like I’m preaching patience, but I’m preaching reality. If the right person’s there, and we can plug them into the Canucks, we’re going to do it as soon as we can.”

Even if the Canucks get some improvement from within from players like Rathbone, and perhaps Travis Dermott, there’s no guarantee their greybeards will be as good as they were last season. Can Luke Schenn, who turns 33 in November, be a reliable partner for Quinn Hughes again? Can they expect top-pairing minutes again from Tyler Myers at age 32, and Oliver Ekman-Larsson at age 31?

If a trade can be made, the Canucks are well set up to part with a forward. If Mikheyev and Kuzmenko are productive top-nine players, and Vasily Podkolzin and Nils Höglander take another step forward, the Canucks would have 10 players that could be considered top-nine forwards.

Training camp begins in 57 days, so there’s still time. But for a management group that was brought in to fix a broken franchise, the pressure is starting to rise. Bringing back Jim Benning’s defence, plus Dermott, will be hard to sell.