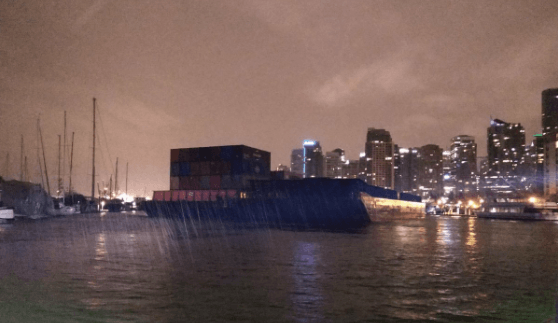 Damages are expected to be well over $1-million after a pair of runaway barges broke loose from their moorings and slammed their way across Vancouver’s Coal Harbour, striking two luxury yachts and three structures.

The barges, each the size of a soccer field and loaded with containers, were stationed in North Vancouver, but somehow came off their moorings before dawn on Boxing Day.

After receiving a 911 call, the VPD Marine Unit responded as the massive barges drifted across the water towards the Burrard Inlet.  Port Metro Vancouver Patrol was called in to help.

The barges struck several yachts and structures in and around the Coal Harbour Marina.

That includes the waterfront restaurant, Lift, where one barge struck the patio, knocking out two large glass panels.  No one was inside the restaurant when it happened.

“We were really, really lucky. It could have been much worse,” Claire Clarke told Daily Hive in a phone interview.

A structural engineer is being brought in to assess whether the eatery suffered structural damage during the incident.

The boats were brought under control just after 8 am, with the assistance of the marine unit, two local tug boats and two Port Vancouver vessels. Both were towed back to North Vancouver.

Sgt. Jason Robillard said the Vancouver Police will be investigating the damage to the boats and structures and working with the Transportation Safety Board on their part of the investigation.

No injuries were reported.

VPD Marine Unit responded to 2 runaway barges that had already damaged the seaplane base, two luxury yachts and a restaurant. Our vessel pushed the barges until emergency tugs arrived preventing further damage and incursion into Coal Harbour @VancouverPD @CTVNews pic.twitter.com/HOOfXAe9An