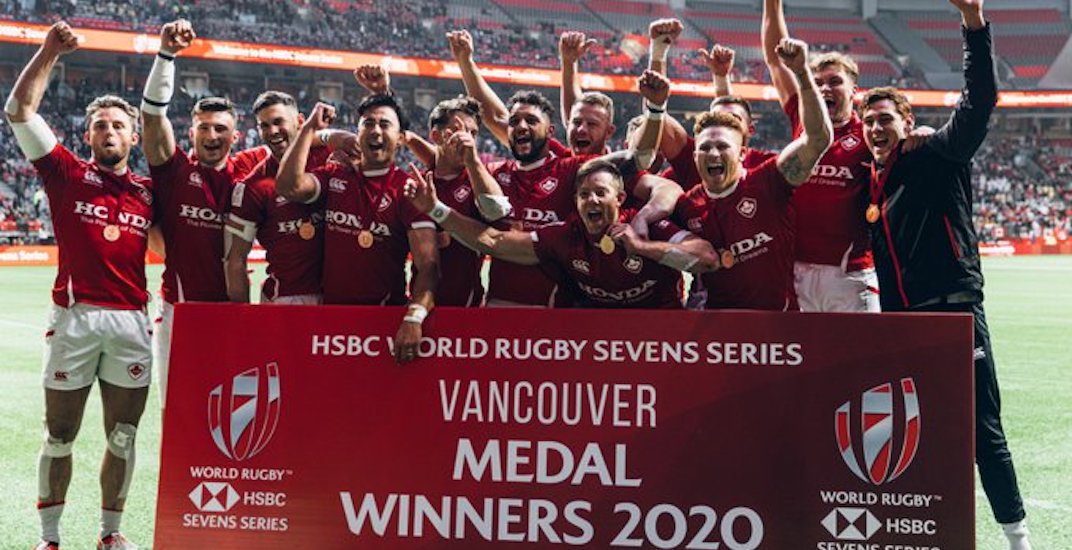 What a weekend for the host team at Canada Sevens.

With the support of 74,560 rugby sevens fans over the two-day tournament, Canada had its most successful result in the five-year history of the Vancouver event.

Canada earned a surprise bronze medal on Sunday, upsetting South Africa just hours after they literally came within inches of beating Australia in the semi-finals.

The home crowd helped the home team to victory according to Canada’s Harry Jones.

“It’s almost like unlimited fitness, because they just push you every single time. Family, friends, coaches, kids that you’ve kind of coached before. They push us so hard,” said Jones.

Canada won its pool on Saturday, going a perfect 3-0 with a point differential of +37, sweeping matches against France, Fiji, and Wales.

It was during the game against Fiji when we saw possibly the most fun 15 seconds of the tournament. Justin Douglas scored the game-winning try and celebrated by leaping into a couple of Canadian Sasquatches.

Justin Douglas scores the game-winning try in an upset win for Canada over Fiji… then does a Lambeau Leap into a couple of Canadian Sasquatches 🇨🇦 @OffsideDH @CanadaSevens @RugbyCanada #Canada7s pic.twitter.com/g0MzKT6jgR

“It’s an amazing environment to play in, the fans are what make this tournament what it is,” said Canadian captain Nathan Hirayama. “I wish it was a seven-day tournament. We could do this every day.”

Canada dominated its quarter-final game against Spain, walking away with a 21-0 victory, before a semi-final matchup against a heavily-favoured Australia team. With Canada surging in the match’s final moments, they came up just short of a game-tying try — with the referee needing video replay to confirm the ball didn’t touch the line.

Canada shook off that disappointment in the bronze medal match against South Africa, winning the match 26-19, for their first top-three finish on the World Rugby Sevens Series since 2017.

A 26-19 victory over last week's cup winners South Africa sees @rugbycanada finish in the top three of a tournament for the first time since May 2017.

Many fans stuck around as Canadian players did a full lap of BC Place, thanking every fan that made the trip down to first row.

This was very cool to see in person. pic.twitter.com/7T2csjJU5w