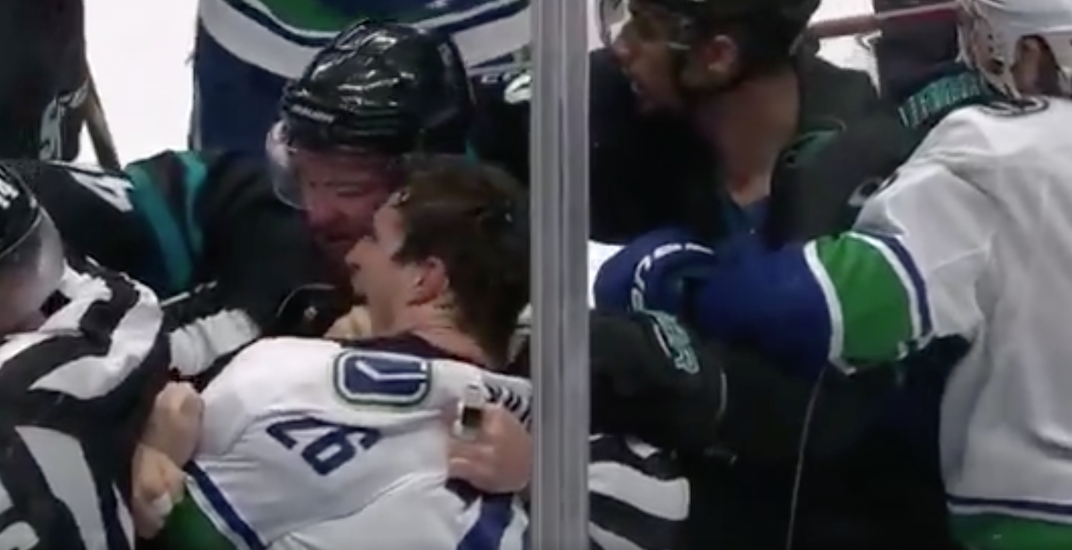 As if losing 4-0 to the San Jose Sharks for their eighth loss in a row wasn’t bad enough, Canucks forward Antoine Roussel might be facing some level of supplemental discipline.

With 40 seconds left in the game, Roussel and Sharks defenceman Marc-Edouard Vlasic got into a pushing and shoving match after the whistle. One thing led to another, with both players getting in each other’s faces as the linesmen rushed to separate them.

Vlasic dropped his gloves, and dug into Roussel’s face. So the Canucks winger decided to bite back.

Here’s @Vlasic44 getting his hand bit at the end of tonight’s #SJSharks win. pic.twitter.com/33tRTeZm3X

After the game, Vlasic told San Jose reporter Kevin Kurz that Roussel bit him, and had the mark to prove it.

Marc-Edouard Vlasic says Antoine Roussel bit him. Showed me a mark on his left hand #SJSharks

Roussel was not made available to the media to tell his side of the story, reports TSN 1040’s Jeff Paterson.

FYI: no sign of Roussel post-game and he was not made available to media

Roussel received a double minor plus a 10-minute misconduct on the play. He picked up 18 minutes in penalties on the night. Roussel now has 65 penalty minutes on the season, trailing league-leader Brad Marchand by just one PIM.