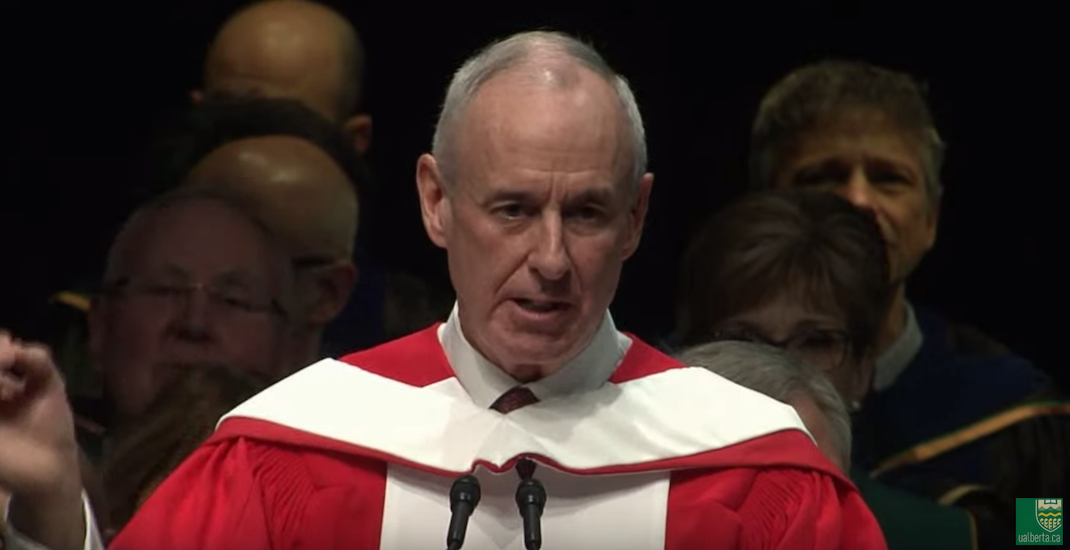 This afternoon, Ron MacLean was recognized with an honorary degree of law at the University of Alberta, where he addressed the graduating class and offered up some words of advice.

MacLean admitted that he has had one heck of a week and that it took him until the morning of the convocation to write his speech.

“My job is to teach you kids — you young women and men — how to stay out of trouble,” MacLean said, met by laughter from the audience.

His speech touched on his connection to the university, explaining that his wife attended the institution while he was living in Red Deer Alberta, just a few years before his start at Hockey Night in Canada.

MacLean also shared that he was in the “crosshairs” this week while “dealing with the idea of taking sides.”

“I said on Saturday night on Hockey Night in Canada, I’m looking for my words, and I was kind of happy I couldn’t find them, because it was Nietzsche who was channeling Shakespeare’s Hamlet who said that ‘when you can find the words, it means it’s dead in your heart.’ And this is very much a learning, living experience that has been taking place personally [and] for all of us.”

MacLean’s address to graduates also comes on the same day as the launch of Don Cherry’s new podcast, where the 85-year-old shared his version of what happened in regards to his now-infamous comments about immigrants on Coach’s Corner. Cherry also shared his thoughts on Ron MacLean’s comments this past weekend.

“He’s still a friend,” Cherry said. “I’m a little disappointed, but I won’t go any further than that.”

Meanwhile, MacLean shared words of wisdom and lessons learned from his career, telling graduates to follow their passion.

“No one wins a quarrel by quarrelling,” said MacLean.

“Now everything is happening in real time on [social media], and it’s scary. But democracy is so important. It’s not meant to be peaceful; it’s meant to have a little bit of dissent.”

MacLean ended his speech by telling graduates to keep “an open heart and an open mind.”