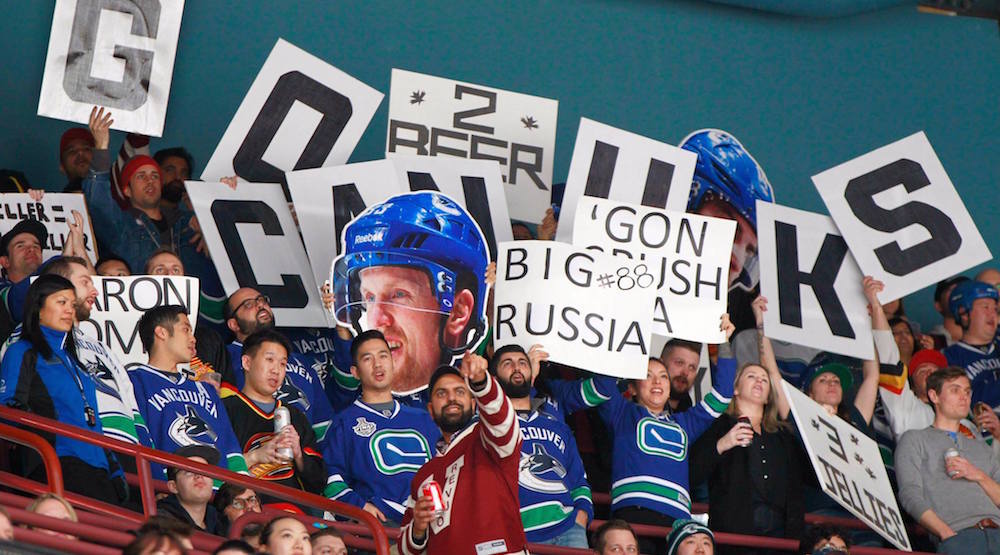 No wonder it's so quiet in here. Thank you NBA & Knicks. No bells & whistles, just basketball. pic.twitter.com/oLJZXRG04r

For team introductions and the entire first half, the in-game music was turned off. Video and in-game entertainment were also given a break in an effort to allow fans to “experience the game in its purest form”.

Players like Golden State’s Draymond Green were not impressed with Silent Sunday, saying: “That was pathetic. It was ridiculous. It changed the flow of the game. It changed everything. You get so used to playing the game a certain way.” He also went on to call it disrespectful to people who have evolved the game “from an entertainment perspective.”

But many basketball purists are applauding this move for its ingenuity and boldness in an age where it seems as if we are constantly being inundated with multiple forms of media, regardless of the setting.

It’s an interesting idea and it got me thinking about how this would work in Rogers Arena for a Vancouver Canucks game.

It has become common practice for Twitter and attendees alike to critique, deride, and/or applaud the in-game DJ for his or her choice of music, be it during the regular course of the game or in specific situations such as penalties (think “We’re Not Gonna Take It”), fights (“Fight For Your Right”), and goal/offside reviews (Final Jeopardy theme music). What if all of that was turned off and we were vaulted back to a time before every play was punctuated by Top-40 hits, popular remixes, and classic rock?

Skeptics will quickly point out that “Rogers Arena is already too quiet!” It’s a pessimistic perspective, but a valid one. Rogers Arena, especially in recent losing seasons, has become somewhat of a sound vacuum.

However, if the Canucks were to follow the lead of the Knicks and MSG, what’s the harm in trying this interesting initiative for the first period?

Imagine if they did it during a home game against the Toronto Maple Leafs? It would be a noise battle in the stands between competing fans.

There is something to be said for taking in a professional sporting event without the fanfare of modern technology and our consumer society. Without the music or sound effects in between whistles, there is likely an added emphasis on examining the previous play and perhaps yelling at your favourite player (or least favourite player) on the ice.

Take The Larscheiders supporters group for example – without the music, you’d be able to hear and join in with the Daily Hive-initiated fan group in an effort to reinvigorate a once loud and boisterous crowd.

Additionally, there is some credence to the “purest form” notion. Sure, the players are faster, the shots are harder, some of the rules may have evolved, and equipment has taken a gigantic leap forward, but at the end of the day, NHL hockey is still six grown men on skates competing to score more goals than they allow.

While trades for prospects at this year’s trade deadline signalled a new direction from management, why not start some new traditions within other areas of the organization. It’s a unique experience and one I don’t imagine newcomers or old, faithful fans would soon forget.

What do you think? As a spectator, would you enjoy watching a game without music in between whistles and throughout player introductions?