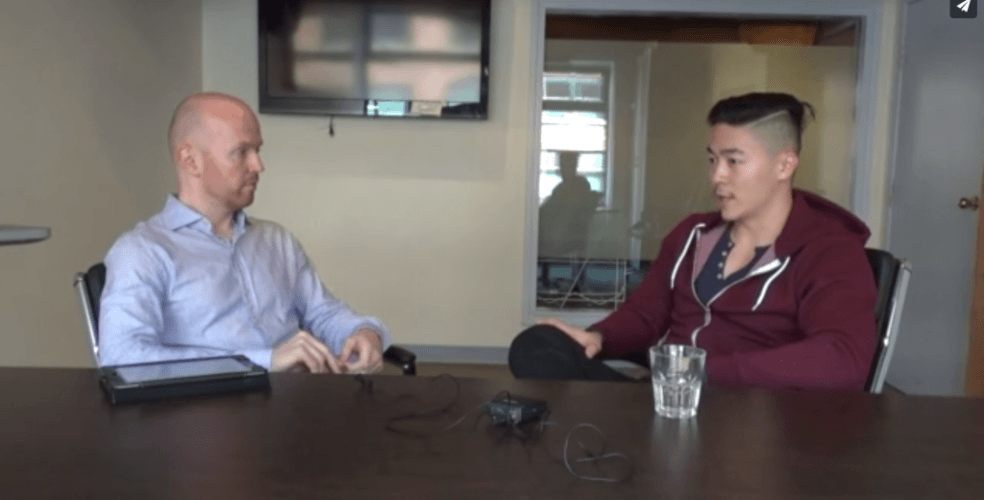 As a follow-up to our article which came out last week, we managed to track down the pick-up instructor Jan Huang, of Jan Lifestyle, accused of publicly harassing women on Robson Street. He agreed to sit down for an interview and give his side of the story.

Jan used to be a shy, introverted person, and in college he decided to change that. So he began studying pick up techniques and approaching thousands of women and men to gain self-confidence and be more comfortable socially. Two years ago he began having more success. He would meet a girl at a nightclub and take her home that night. His friends began to notice and ask for tips. He eventually decided to create a business based on sharing his skill set.

Here’s what he had to say:

What is the target for a client, how many women are they supposed to approach?

I don’t have a target number because I don’t want to objectify women, that’s not what I teach. I try to get them to approach as many women as possible, but these are socially awkward guys dealing with social anxiety, they don’t want to approach lots of women.

One of things for these guys is to be aware that they f—ed up and why, so they don’t do it again. For Nicole’s incident I was aware that she was pissed off but I wasn’t able to stop it in time. But I told him (the student) afterwards ‘you’re too aggressive you pissed a girl off, that’s not how you pick up women.’

It seems that you’re teaching your students not to take no for an answer.

I don’t agree with that at all. I honestly didn’t recognize that I’d approached her (Nicole) in the past. We have so many interactions and see so many faces that we don’t actually remember who we’ve approached. When I go out right now on any given night at least 3 girls I talk to will say that I’ve approached them before. And I’ll excuse myself and walk away, or I’ll just keep talking.

In your perception, how does a woman feel when she says “I am not interested” and is ignored? How does it make you feel?

I feel terrible about this girl Nicole, from the article. What I have to say about these guys is that they’re very uncalibrated, they don’t know how to measure what they’re doing. Being good with women is like every skill, like every social skill, is that when you first learn it, you’re going to screw up a lot of the times, like I did. When I was first learning I came off as really weird, and really creepy, and then I learned to be confident and love myself and realized women are more open to that kind of approach. Now if I approach a girl and she says she’s not interested, I politely excuse myself and leave.

This all sounds great to us, but it also directly contradicts the numerous accounts we’ve had from women who say they have had interactions with Jan personally, both on Robson street and at night clubs. A few men also contacted us saying Jan allegedly hit on their girlfriends aggressively. All told, almost twenty different people responded to our article with similar stories about Jan’s pick up tactics.

Two different, unrelated women (who both wish to remain anonymous) that agreed to go out for coffee with him, and later expressed they were not interested in continued dating, were heavily insulted. Both times, Jan said that “we could have had love now your life will be a trail of used condoms and abortions,” which suggests this is an insult Jan somewhat commonly throws at women when rejected.

We read some of the text messages our readers forwarded to us to Jan. At first, he did not know which girl he had sent them to: 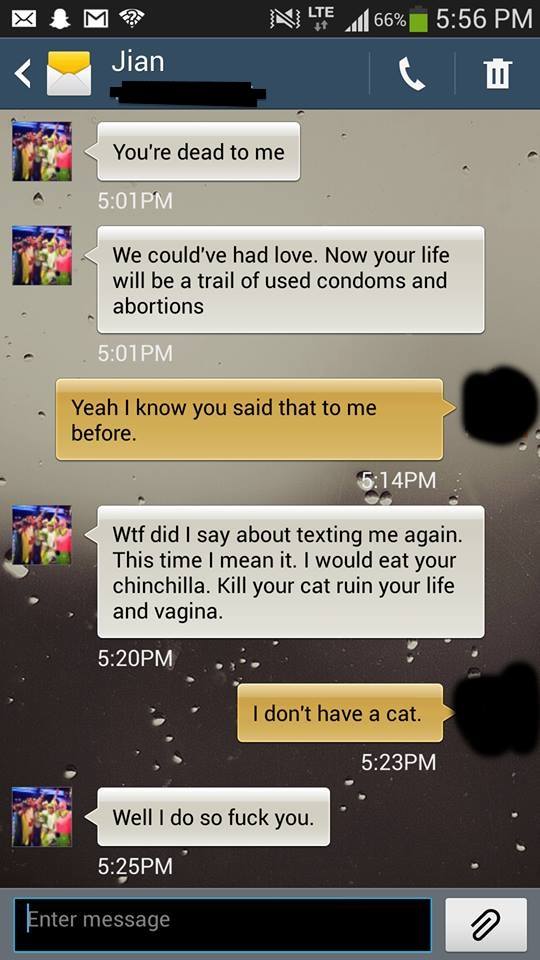 When he remembered, Jan says he was attempting to be humorous.

For this incident it was my terrible attempt at humour. And she was really pissed off. But that’s not what I teach to my students. She was a girl that I felt that I had a true emotional connection with. I didn’t know what to do because I really really liked her. So literally that was me trying everything that I could to get an emotional reaction from her. If guys meet a girl that they like they just don’t know what to do and act irrationally.

According to the woman in question, she and Jan met up only three times. Other women who approached us also said Jan made similar comments after meeting only a few times.

Women have also approached clubZone with other statements Jan allegedly made by text message, which included: “fuck you kill yourself no one treats me like this” and “you’re dead to me.”

One of the women involved added: “Because of that experience I’m much more guarded about giving out my phone number, meeting men, and when approached by men on the street. I hate that he’s teaching other men to act like him.”

Should a man who, by his own admission, can’t “act rationally” and has threatened women who refuse him, be coaching other men to do the same? What are your thoughts, Vancouver?