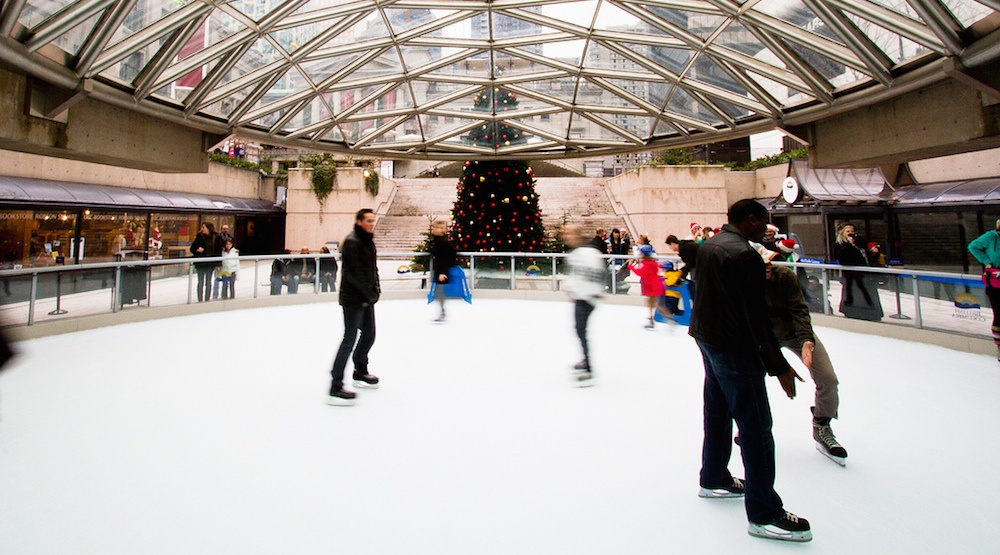 The provincial government’s Robson Square Ice Rink is slated to reopen on December 1 for the 2016/2017 season, and as per tradition skating is free for all ages.

Wedged under the subterranean covered outdoor plaza at Robson Square, the rink is operated seasonally by the government when temperatures begin to dip.

This will be the rink’s eighth consecutive winter season after it reopened in late-November 2009 following a $2-million repair and upgrade, funded partially by General Electric, in time for the 2010 Olympic Winter Games. Prior to the renovation, the rink was closed for nearly a decade.

Skating is free for all ages for those who bring their own skates while those without skates can rent a pair on-site. A concession stand on the side will also serve warm drinks and snacks.

Since the reopening, the free ice rink at Robson Square has quickly become one of Vancouver’s most popular winter activities. The rink will remain open through Christmas Day and New Year’s Day.

For the coming holiday season, Vancouver’s official Christmas Tree, a 50-foot-tall tree covered with thousands of bright lights, and the traditional lighting event will be relocated to Robson Square from its previous location at Jack Poole Plaza. The tree will be placed on the closed Robson Street roadway between Howe and Hornby streets.

Cost: Free for all ages, if you bring your own skates (Skate rentals are $4.00, and rentals end 30 minutes before closing time)

Note: Helmets are mandatory for children 12 years and under