On Thursday evening, authorities located Riya’s body in a Brampton residence, which is believed to belong to Roopesh, after an Amber Alert was issued following her mother reporting the 11-year-old missing.

Roopesh is currently in police custody in a trauma centre being treated for an undisclosed “medical condition.”

Here is the timeline of the tragic events.

Thursday, 3 pm: Riya was dropped off at a Mississauga gas station so Roopesh could take her out to celebrate her birthday.

Thursday, 6:30 pm: Her mother reported her missing to police after she says Riya failed to return at the agreed pick up time and police say she received a threat from the father indicating he might cause harm to himself and to Riya.

Thursday, just before 11 pm: An Amber Alert was issued, hours after police began searching for Riya and Roopesh. 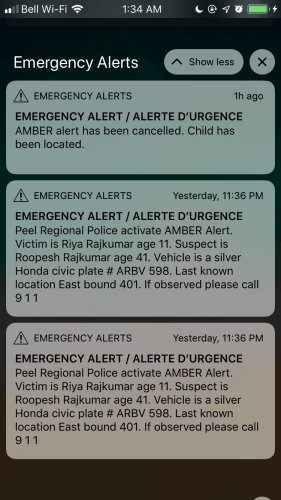 Friday, 12:30 am: The Amber Alert was cancelled. Peel Regional Police confirmed they had located Riya’s body in a residence in Brampton, which is believed to be Roopesh’s. Around the same time, the Ontario Provincial Police arrested Roopesh near Orillia, ON.

Tragically, the incident didn’t have the outcome police were hoping for, but the alert did end up being the direct reason the suspect’s vehicle was spotted and reported to police.

Friday morning: Following Roopesh’s arrest, authorities say there was a “medical concern” and he was taken to hospital. He has since been transported to a trauma centre, in police custody.

Friday, 1:30 pm: Peel Regional Police provided an update on the investigation and said Roopesh is now facing first-degree murder charges for the death of Riya. Once he is medically cleared by doctors, the legal process can begin.

Amber Alerts like the one so many of us received last night are critically important to helping police when a child’s life is on the line. My deepest condolences to everyone mourning young Riya today.