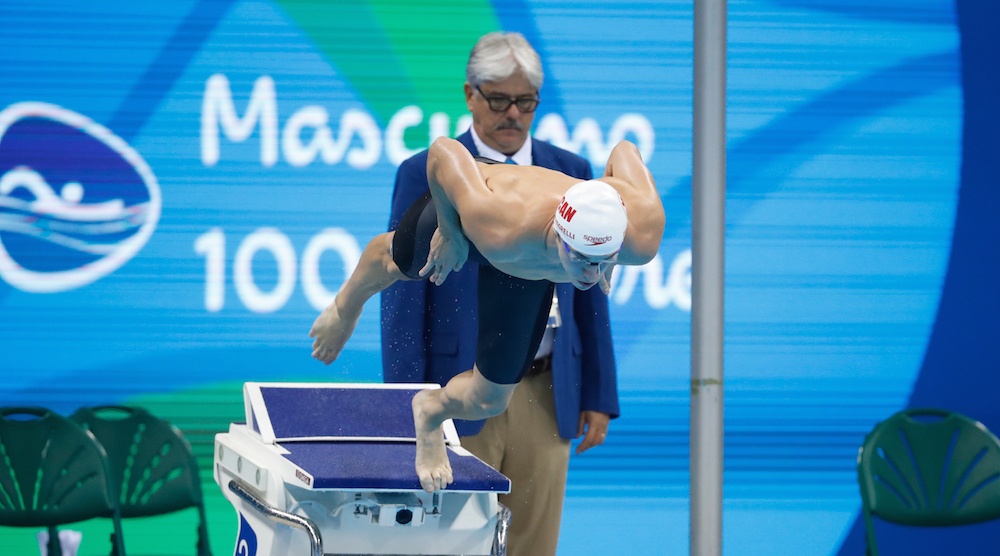 Canada has at least one medal on each of the first four days of the Olympics so far, the first time that our country has accomplished this feat in a Summer Olympics. Can we make it five today?

Here’s what you need to watch today (events televised on CBC, TSN, Sportsnet).

Canadian Santo Condorelli, he of the pre-race one finger salute, has qualified for the men’s 100-metre freestyle final with the third fastest time, and should challenge for a medal.

*Update: A rain delay in Rio has postponed this match until Thursday.

Canada will try to keep the ball rolling with another win against Senegal. The Canadians have been impressive so far, beating China easily in their opener and winning after facing adversity against Serbia in their second game.

Senegal has been blown out in each of their first two games, so Canada will be heavily favoured in this one.

The Canadian duo need a win to stay alive in the beach volleyball tournament.

No Canadians involved, but this is one of the glamour events of the Olympics.

Whitby, Ontario’s Kelita Zupancic could be in the mix for a medal in judo on Wednesday. She finished ninth in London four years ago as a 22-year-old and won a gold medal at the Pan Am Games in Toronto. We’ll see if she can win her matches earlier in the day to advance to one of the medal finals.

Spots in the quarter-final are on the line on the last day of the group stage in men’s soccer.

Remarkably, Brazil has not scored a goal yet in two games, earning two ties. They need a win to be guaranteed to move on. Traditional world powers Germany and Argentina are in third place in their respective groups, and will need results to avoid an embarrassing early exit.