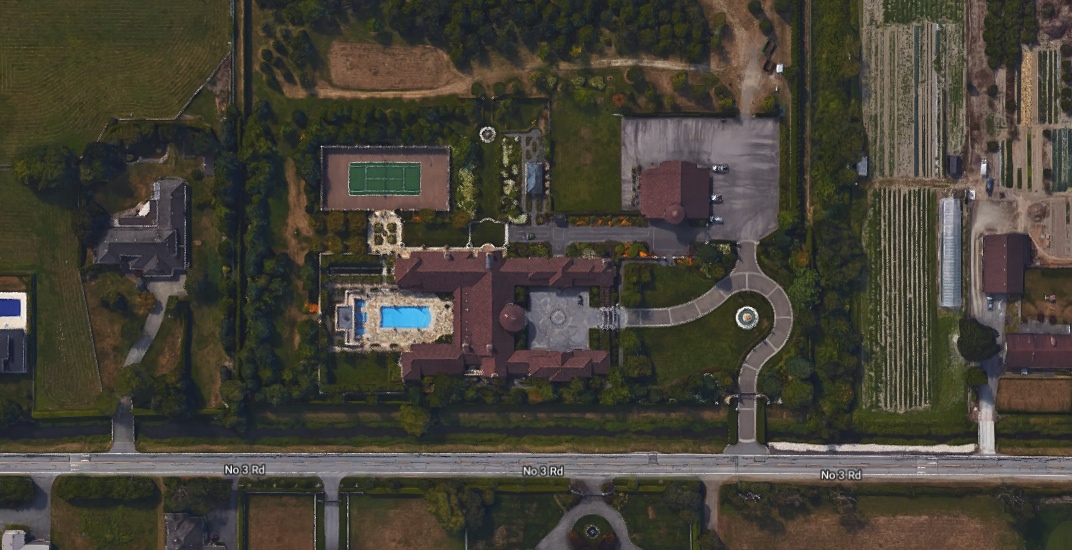 A very large home with a swimming pool in the Agricultural Land Reserve in Richmond. (Google Maps)

A years-long attempt by some residents in Richmond to restrict the size of homes on the Agricultural Land Reserve (ALR) has been defeated for now.

Richmond City Council voted last night to continue allowing the construction of large homes up to 10,764 sq. ft. on farmland, with councillors defeating a proposed amendment to half the permissible size of 5,382 sq. ft.

Additionally, councillors decided to allow secondary homes of up to 3,229 sq. ft. to be built on properties exceeding 20 acres, without any need for rezoning. Under this new policy, 85 properties – about 7% of AG 1 zoned properties – could add an additional dwelling, and 16 of the properties could have up to three additional farm homes.

The mansion-size homes have grown in number over the recent years, and they have been controversial, with critics asserting that it ramps up speculation, making it financially unfeasible to operate a farming business on the land. Farmland in Richmond now averages at about $1 million per acre, exponentially higher than other jurisdictions.

Such agricultural properties with large homes also qualify for large property tax deductions if a relatively minimal quota of food production is reached.

For instance, a recently completed 14,000 sq. ft., Tuscan-styled mansion with a 10-acre vineyard built on 76 acres of agricultural land in Surrey now has an asking price of over $28 million.

But local farmers and farm property owners, represented by the Richmond Farming Community, countered that special interest groups, specifically “non-farmers,” had a “fundamental lack of understanding of the farming industry.”

“Many farms are family owned and operated, and an extended family lives under one roof. Under current bylaws, homes on agricultural land cannot be subdivided into multiple units, which necessitates larger home sizes, simply to house everyone working on the farm on a daily basis.”