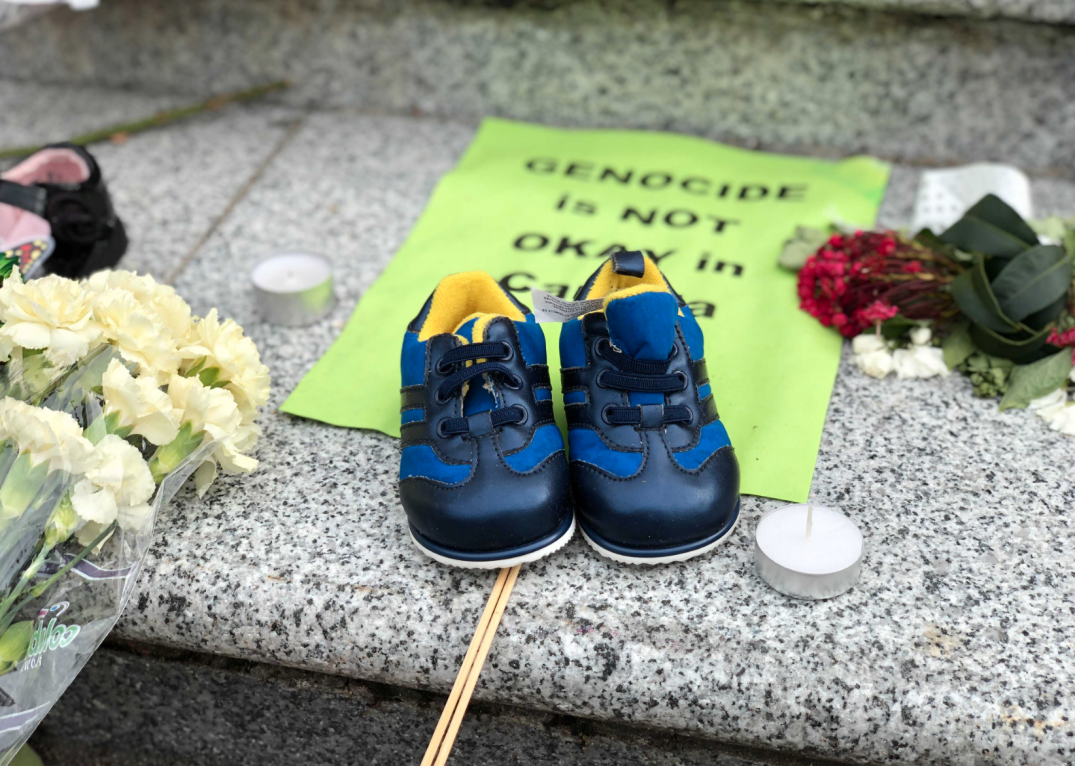 The outpouring of grief across the province at the discovery of a mass unmarked grave of children at a former residential school site in Kamloops could be a turning point that unites the province behind a true reconciliation effort, say two prominent BC politicians.

Skeena MLA Ellis Ross, a former Haisla Nation chief, said that while Aboriginals have known about the atrocities committed at residential schools for decades, it wasn’t until the discovery of the 215 remains of children in Kamloops last week that the larger non-Aboriginal population became aware of the magnitude of the tragedy.

“I can understand. I mean, people have their lives to get around, they’re still trying to get food on the table and still trying to pay off their mortgages, and they have their own issues and it’s hard to comprehend something that happened over the span of 150 years,” Ross told Daily Hive in an interview.

“What I do appreciate, though, is it’s not the Native leaders that are just alone, calling for action. It’s actually non-Aboriginal citizens of BC and Canada that are yelling for change and for some type of action.”

Across the country, people are gathering at memorials and former residential school sites, lighting candles, holding vigils and leaving out children’s shoes to illustrate the lives lost.

Flags have been at half-mast at most public buildings, and many students in public schools wore orange this week to show support for the families whose children died or were abused at residential schools.

“I’ve never seen this outpouring before in my life,” said Ross.

“So I think that the will of the voter is basically telling the politician to get a move on and do something specific to address this. I think it can open the door, more than anything else that I’ve ever come across, to true reconciliation. I think people will embrace it now.”

“This happening, I think, has opened the conversation for reconciliation up,” said Saanich North and the Islands MLA Adam Olsen, a member of the Tsartlip First Nation on Vancouver Island’s Saanich Peninsula.

“And I think that it’s also changed what that means. I think in the past it has meant we can do the reports, we can write the reports, and that’s reconciliation. Now it’s actually confronting the demons of our history in a very open way.”

Residential schools operated in Canada from the 1870s to 1997, forcibly taking Aboriginal children from their communities and attempting to assimilate them into European culture. More than 4,100 children died at the schools from disease, abuse and suicide, according to a death registry maintained by the Truth and Reconciliation Commission. Many are buried in unmarked or poorly maintained mass graves, with as many as one-third of the children still unnamed or unidentified.

The federal government has formally apologized for its role in residential schools, but not the Roman Catholic Church, which operated many of the sites. There were approximately 22 schools in BC.

The discovery in Kamloops has sparked calls for governments to search the other Canadian school sites for similar mass graves, and to then identify and potentially repatriate the lost children.

Aboriginals have known for many years that the bodies were there, but very few others seemed to care, said Olsen. Yet the 215 children found in Kamloops seems to have changed something.

“This was a big wake up call at 215, but as one chief told me, this is just the tip of the iceberg,” said Olsen.

BC politicians held a moment of silence at the legislature Monday, with Premier John Horgan expressing his shock and horror at the discovery in Kamloops.

But for Ross and Olsen, the sympathies of the government only go so far.

Olsen called for immediate funding to help First Nations handle the trauma of the discovery, as well as support to reclaim languages and houses of governance.

Ross said the province needs to help repatriate the remains of the children back to the First Nations communities from where they came, if that’s what is wanted by individual nations.

“It’s going to be painful, like ripping off a band-aid that takes one to five to 10 years, but I think that will provide a small measure of closure for those suffering,” he said.

“I know how complex it is… but a lot of these communities, I think they’ve already got in the back of their minds that they’re preparing for the day when they can receive those remains.”

The response from Indigenous Relations Minister Murray Rankin was that the province is waiting for specific requests from First Nations for aid, and would prefer they take the lead in asking for help rather than the government dispensing blanket funding.

“I was actually quite shocked to find out in the legislature that the government didn’t really have a clear answer for what to do, they seem to be confused,” said Ross.

“I mean, the story broke out over the weekend, then it spread through social media, and I watched the despair happen all over BC almost overnight. So to come to the legislature Monday morning and find that all they had was generic rhetoric as an answer was quite surprising to me and quite appalling to say the least.”

Olsen took offence to the government’s description that the deaths were “unimaginable,” pointing out the province and Ottawa have long known exactly what they did to Aboriginal children even if they refuse to acknowledge reality.

He said non-Aboriginal people, who may for the first time be aware of the scope of the residential school horrors, could build upon the moment by pressuring their local politician for change, as well as engaging with and donating to a local First Nations project.

The federal government is technically the lead on residential schools, but that shouldn’t stop the province from stepping up to act, said Ross.

“They’re complicit in the overall makeup of what happened to Aboriginals over the past 50 to 100 years.”

The challenge is to not give in to the anger or hate that can come with the discovery of such death, or the frustration at the political response, and to choose a different path in channeling the outpouring of grief seen across the province, said Ross.

“I am not going to join the crowd that actually leans toward revenge or hate or trying to take it down a different road in terms of the opportunity that we see right now,” said Ross.

“Right now, here’s a real opportunity for Natives and non-Natives, out of the political realm, to actually embrace each other and say, ‘Yeah, We do want to reconcile, no matter what our political leaders say or do.’”