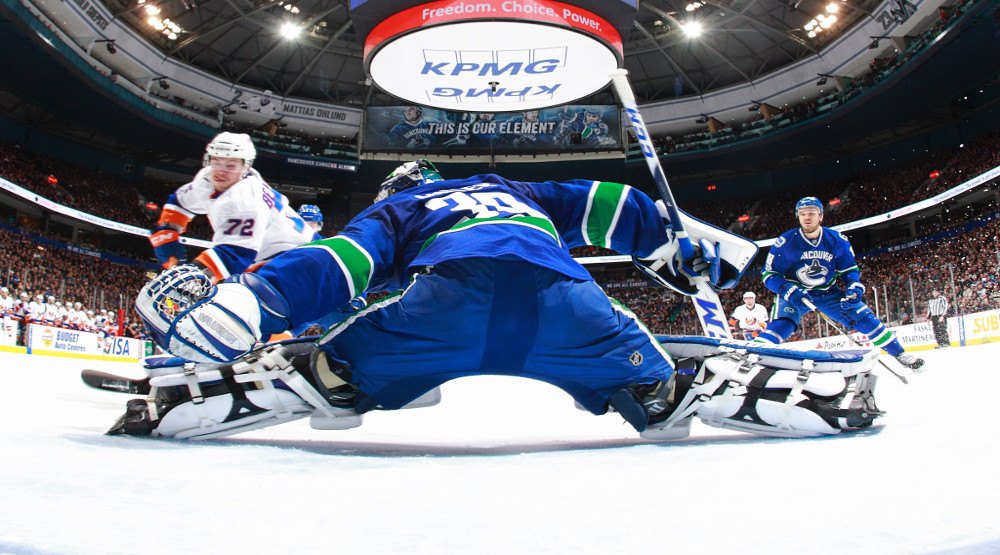 Guys, I’m starting to think the Canucks might not make the playoffs.

Yes, despite the late game heroics of one Troy Stecher (from Richmond), the Canucks failed to secure two points, losing 4-3 in overtime to the New York Islanders on Thursday.

Is it time for a change-up for some of the Canucks players? Maybe 20 pints of beers can turn things around for a playoff run.

As far as games go, it was an entertaining one. There were goals, giveaways, and Megna. What more can you ask for in a game, really.

Let’s break this one down, shall we?

Credit where credit is due, Benning’s acquisition of Baertschi looks better and better the more time passes by.

Not only has Baertschi continued to play well with Bo Horvat, but he’s also showcasing the offensive talent that netted him 94 points in 47 games for the Portland Winterhawks many moons ago.

That’s the kind of dangle that would have made Kyle Wellwood proud.

Horvat and Baertschi continue to provide the most entertaining offence on the Canucks, giving people a reason to actually watch the games on some nights.

Solid theory. Who knew Baertschi could knock back 20 pints??

Speaking of young kids putting up points in junior, Reid Boucher got himself a golden opportunity tonight with both Eriksson (broken in half) and Goldobin (flu/waxing car) out for the night.

With Willie’s hand forced to play him, Reid Boucher made it count, scoring not only a goal (you can go ahead and watch it below…I’ll wait.)

But also showcasing his hard heavy shot throughout the game.

Boucher finished with 5 shots on the game, and 14:47 of ice time. He looked dangerous with his shot, and didn’t look out of place on the powerplay. All in all, quite a solid game for the usually scratched Boucher, who hopefully by now “understands the system”.

Now, the last time Boucher got a goal and a lot of ice time, he was back down to 7 minutes of ice time the next game, and then scratched the next. Can’t let the kid get a big head. He has to earn it, or something like that?

So the question will be, will Boucher continue to get more chances in the lineup, or will Willie continue to use him only when injuries dictate it?

From the fans point of view, it appears they want to see Reid play. And you can see why, because the kid truly does have an NHL shot. It is how he got 62 goals for the Sarnia Sting in 2012-13 after all.

But with Coach not trusting the young kids, is there enough ice time for him to hand out when Goldobin comes back?

Here are some of the bad things that happened in the game. Notably, Islander goals.

Yes, one of the shifts saw Troy Stecher get super mad at Anders Lee after Chaput pushed Lee into Stecher (it was a scene straight out of the Three Stooges), which saw Stecher spend the shift trying to murder Lee with his eyes. At one point he even looked like he threw down a glove, ready to fight, which is odd as Stecher is a lover not a fighter.

Near the end of the shift, after Stecher had punched himself into exhaustion, the puck had the misfortune of bouncing off of him and into the net.

Luckily Ryan Miller did not give him the lasers of death after the goal, which is kind of weird, as that is a prime goal for ol’ laser eyes to acquire a target.

One of the other Islanders goals saw a breakdown in the Canucks end, leaving Torts’ favorite shot blocker Chris Tanev trying to save the day, but it was to no avail.

And lastly, Brendan Gaunce took a nasty spill into the boards at the end of the first period, and left the ice. Luckily he returned later in the game because you can’t break A GOOD CANADIAN KID FROM SUDBURY, LETS GOOOOOOOOO.

4. Troy From Richmond does it again

Troy Stecher had a hot start to the season, then cooled off, then has looked better the last couple of games. Kind of like Hutton, actually. The closer you get to 300 games…

Tonight, Stecher reached into his bag of tricks and decided to tie the game up late in the contest.

With most teams rushing Stecher at the point now that they know he’s sneaky, he’s seen around 1 billion shots get blocked and bounce harmlessly away.

Tonight, he skated a bit and found an open lane, and used a nice screen from Granlund to tie the game up.

Which for Team Tank was a very sad/happy moment.

Which for Team Winning Culture, won’t be a sad moment until the draft.

Regardless, it was a very nice goal, and again shows why people are pretty excited about the kid from Richmond.

OK, roll up your sleeves, we’ve got some word count damage to do.

So there is the Peter Principle, right? And it states:

the selection of a candidate for a position is based on the candidate’s performance in their current role, rather than on abilities relevant to the intended role. Thus, employees only stop being promoted once they can no longer perform effectively, and “managers rise to the level of their incompetence.”

The idea being eventually you hit the roof of your potential, then you climb up one more floor, and proceed to poop on everyone under you.

Now, in hockey, that manifests itself in scapegoats. Scapegoats are the guys who tend to be playing above their head and they arise in two main forms.

One, you have a beautiful team full of angels, and there are a few blemishes on the team. You love your team so much, and if only you could just get rid of those few ugly warts, everything would be great, and a Stanley Cup would be yours.

For example, the 2011 Canucks. Champagne problems.

They were so amazing, that if you were even an average player getting more minutes than you should, it stood out like a sore thumb.

So for example, Tanner Glass. He was not a great player, and he stood out as a result of that, so his very existence rubbed Canucks fans the wrong way. Coach Vigneault loved him some Glass, though, so Tanner was a fixture on many of those teams, culminating in one of the best/worst moments of all time, Fanner Glass.

Aaron Rome was another one. He was a mediocre defenceman, but on that 2011 team, people wanted to murder him because he wasn’t Balls of Steel Salo.

Now, just to show how bonkers good that 2011 team was, Mason Raymond was another scapegoat. This is a guy who scored 25 and 28 assists in 2010, and he was torn to shreds, because he wasn’t a beautiful angel like Henrik Sedin or Ryan Kesler. When people complained about him, they talked like he was Emerson Etem. If only we realized…

This year, the Canucks leading scorer will probably, maybe, get 25 goals and will be hoisted on everyone’s shoulders as a hero.

Still with me? OK so the other kind of scapegoat, is the player getting too many minutes on a garbage team. In this case, the team is already a tire fire of sadness that they become straws on the camels back. The guys that make you go “OK, I have to watch this garbage team because I’m committed, but do I have to watch THIS guy get so many minutes??”

And in most cases, garbage teams don’t have a deep roster. So any little injury can send shockwaves down the roster and all of a sudden you end up with a guy like Jayson Megna getting a ton of ice time, or like last year, Bang Bang Bartkowski.

What adds to this frustration is when the coach doubles down on a player of this ilk, and seemingly has different rules for different players. If you get a coaches trust, you can ride that for a long time.

Which brings us all the way to tonight.

@thestanchion it’s literally the same breakaway as Goldobin goal vs LA. let’s see if he plays more than 6 min tonight.

The breakaway in question is the one below.

Now most games we’d make “Is he the next Hansen?” and go about our day. But remember Goldobin’s first goal? It was the same sort of thing. Both guys saw a chance at a breakaway, and they took a risk to get it.

In Goldobin’s case he scored, and was then benched. The idea’s bounced around were “can’t let a hot shot kid get away with that” and “have to teach him to think defence first”. Which is kind of ridiculous for a team in dire need of scoring, and one that rarely wins. But I digress.

So, the two plays look pretty similar, except Goldy gets benched, and Megna, although he saw a dip in his ice time, didn’t get that in your face “no more shifts for the rest of the game” treatment. 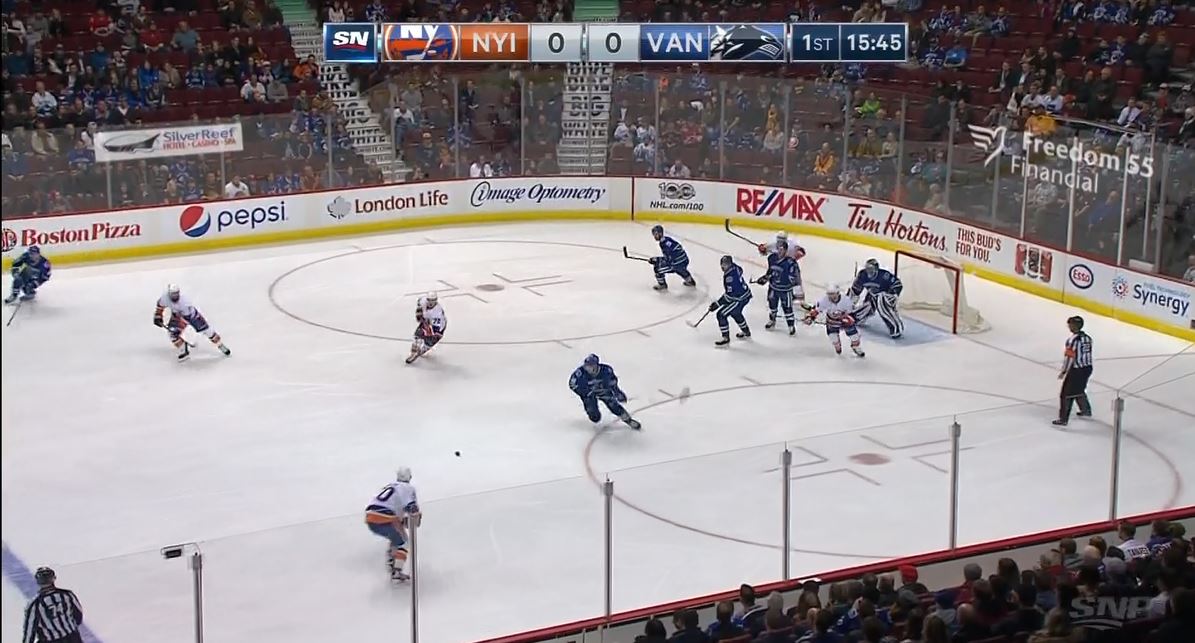 Looking closer, we see Megna at the top left, waiting for the result of a 50/50 puck battle. His guy has position on him should Gaunce not get to the puck first, and his guy doesn’t have any back up coverage (thus it’s a risky play). Megna, though, is trying to create offence. So he goes for it, and luckily it pays off.

Goldobin? He is looking right at the puck. He sees Hutton has a better than 50/50 chance to get it, AND the closest Kings player is in a board battle for position. Goldobin’s guy also has coverage on him should Hutton not win the battle.

All of this results in that disconnect with the fans and the coaches decision and explanations.

And yes, maybe this is drilling down too much into a set of plays, because Megna has proven he’s a defensive stalwart-

Anyways, the end point is that Megna is probably a very nice guy. Hell, if he was a fourth liner getting 7 minutes a game, people would probably love him. The guy does have great speed and can generate breakaways, which even if he’s not scoring, is more exciting than watching a dude chip it off the glass and out.

But Willie loves Megna’s speed and his sweet, delicious right handed shot, so he keeps getting ice time above other players. Which then puts Megna in a position to fail, because he is not a top line player. Thus he gets the scapegoat anger.

@TheStanchion Boucher will be benched next game as punishment

@thestanchion Can you imagine if Goldy did that.

@TheStanchion WD needs to bump up his minutes, let him play his way back on track.

@TheStanchion I think you mean "knows the system"

Overtime was an adventure for Ben Hutton.

First, he has a Tambellini-esque back check to prevent a breakaway. Aka dope as hell.

After that back check, though, he ices the puck. Not good. He’s stuck on the ice. Still, he digs deep, and using Troy from Richmond as inspiration, he goes for an end to end rush.

You see Hutton is gassed after that, and he wants a change. Sadly, the bench wasn’t ready for the change, someone screams “TOO MANY!” (Crawford?), and Hutton decides to gut it out and be a hero.

Except he’s so tired all he can do is offer up token “please skate into my stick” defence, and voila, the Canucks lose.

It was a fun overtime, and I liked Hutton going for it, but the team got caught on that one.