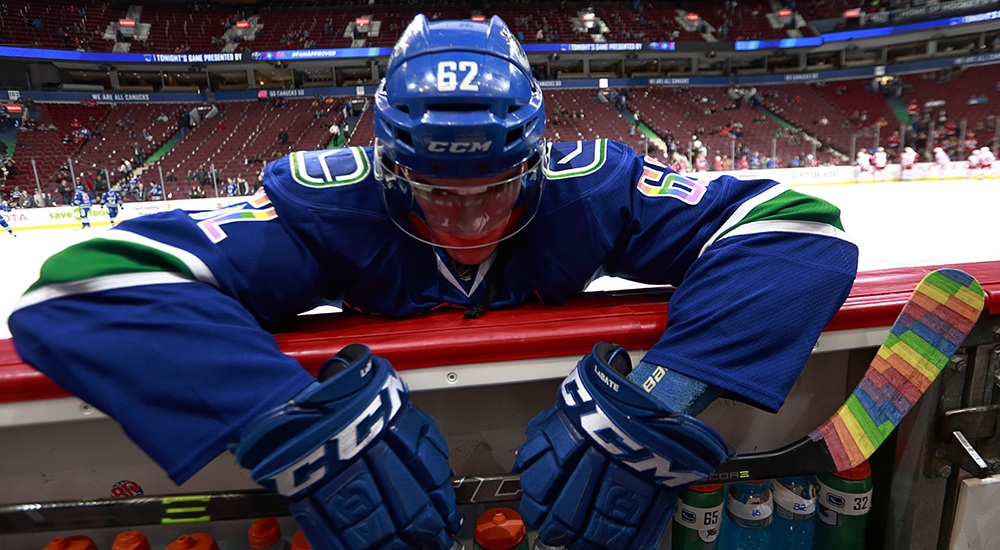 We don’t know about you but we’d struggle to get out of bed after 20 pints, let alone play a game of professional hockey.

And yet that’s the amazing accusation that Irish hurler Lee Chin has levelled at the Vancouver Canucks after spending a week training with the NHL outfit.

Chin, who spent time with the Canucks as part of an Irish TV show that sees amateur Hurlers spend time with professional sports teams, made the claim during an interview with the Irish Times.

“The drinking culture they have, I couldn’t believe it. They were lowering pints the day before a game. And that was sitting at lunch,” Chin said.

“It was after we played a game on a Sunday, and there was a lunch with the alumni team on the Monday. I was invited, with Erik Gudbranson, and one of his team mates beside him. I had a glass a water. Erik was injured, but I asked his team mate if he was playing tomorrow and he said ‘’yeah, what’s the big deal?’”

As if accusations of pre-game drinking weren’t serious enough, Chin then goes on to suggest that players who are stuck in a slump are encouraged by management to go out and drink 20 pints (we’re assuming of beer) in order to find their form.

“And they have this thing called a ‘change up’, when a player is not on form, not scoring. The manager will call a ‘change up’, and basically that player has to go out and ruin himself for the night, then come back the next day, with the attitude of you just don’t care,” Chin said.

“So they send him out, drink 20 pints, go off with a couple of women, whatever he wants. And come back the next day. That’s the way they live. It’s the culture, what they believe in, letting off steam like that. I don’t know if they look at the science behind it.”

Now I don’t know about you, but after 20 pints I’d be in hospital, let alone in a fit state to “go off with a couple of women.” Of course I’m not a professional hockey player. But I can’t imagine that a professional athlete in peak physical condition could do it either. In fact I wonder if their physical fitness might actually be a handicap. After all this is one area where your average beer-swilling fan might have an advantage over their on-ice idols.

Then there’s the idea that the management would actually instruct the players to do this. Now for starters I’m going to say that head coach Willie Desjardins doesn’t look like the kind of guy to be promoting binge-drinking – a nice chat over a mug of hot cocoa maybe – but binge drinking? I don’t think so.

And the concept of club president Trevor Linden ordering a ‘change up’ is about as absurd as claiming that Super Mario Bros. is an accurate reflection of the lives of Italian-American plumbers. I mean, the guy’s name is on a fitness franchise for god’s sake.

I don’t know Chin, and I haven’t spent any time in the Canucks inner sanctum, but I’m going to have to go ahead and call BS on this one. And I’m not the only one doing so.

After the story broke on social media, Sportsnet host Dan Murphy, who has probably spent a fair bit of time around the players, poured cold water on the idea of any kind of drinking culture.

This org that once took chocolate off the plane and didn't let players eat pizza ffs. Doubt management would be on board for a change up.

Murph isn’t the only person who thinks there’s something off with the interview, Trevor Linden also released a statement categorically denying Chin’s claims.

“Our team recently accepted a request for Lee-Chin and a TV show for access to an individual on-ice skills session and a game with Canucks alumni. We were disappointed to learn of the comments made in an Irish Times article about his experience; the assumptions made by Lee-Chin on hockey culture and reported by the Irish Times are baseless and categorically false. They do not reflect our players, their conduct or the culture of our game in any way.”

So there you have it, the story is a non starter.

Now if anyone needs me I’ll be trying to convince the Daily Hive management to send me on a ‘change up’ – for research purposes of course.