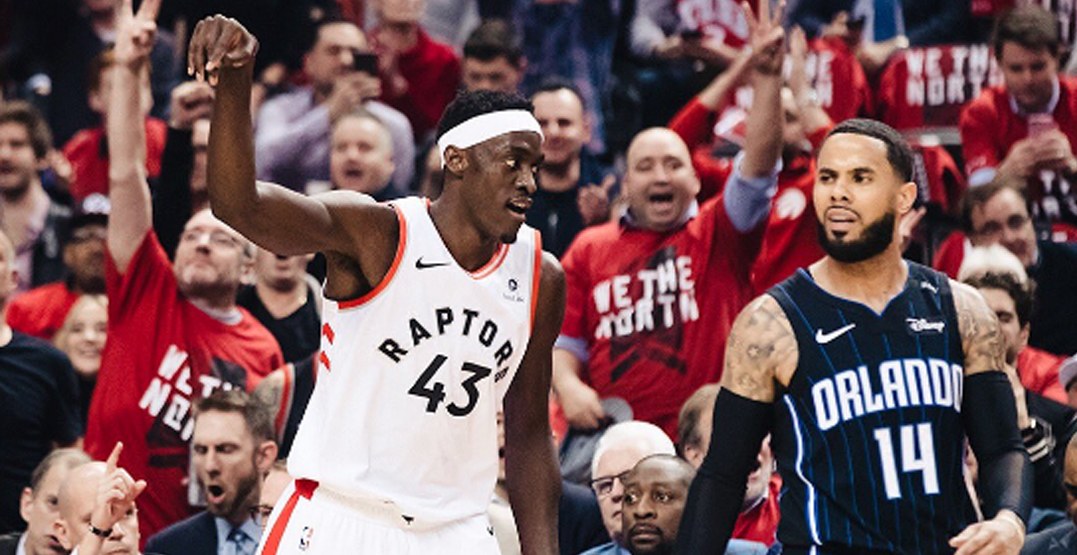 The Raptors are moving on.

After an upsetting start to the series, Toronto showed what they were made of and closed out the Orlando Magic in blowout fashion by winning Game 5 at home 115-96. The win marks the first time in franchise history that the Raptors have won four straight playoff games.

The two-headed force of Kawhi Leonard and Pascal Siakam were at it once again, combining for 51 points in the blowout.

Leonard, who was a monster all series long, continued to make big highlight reel plays.

The KLaw in full effect pic.twitter.com/iPvKpsQTp7

“We’re trying to get to the finals and we feel like we’ve got a group to do it,” Leonard said following his team’s performance.

Siakam wasn’t to be outdone, dazzling the crowd with his on-court vision.

Kyle Lowry also had an impressive night with 14 points and nine assists, but it was his defensive play, particularly the offensive fouls he drew, that stood out.

KLow has drawn more offensive fouls in this year’s playoffs than 8 of the 16 participating teams. pic.twitter.com/PYZfUfDMGL

He took a total of four charges in the game to lead the team.

As good as Toronto’s stars were, it was Norman Powell who had the highlight of the night.

In the second quarter, Powell drove to the hoop for a thunderous dunk overtop of Aaron Gordon. Powell finished the game with 11 points off the bench.

As good as Toronto looked on the offensive end, the story continued to be about their defence.

As the old cliché goes, defence wins championships and the Raptors’ defence was in top form the entire series. Outside of the Game 1 upset, the Raptors didn’t allow Orlando to break 100 points – a big factor stemming from the play of Marc Gasol.

It was one of the most dominant performances in a postseason series in franchise history.

The Raps managed to close out a series in less than six games for the first time ever. Their point differential in Game 5 also hit a historic mark when they extended their lead beyond 30 points.

The Raptors move on to the second round, likely against the Philadelphia 76ers – who will pose a more difficult challenge.