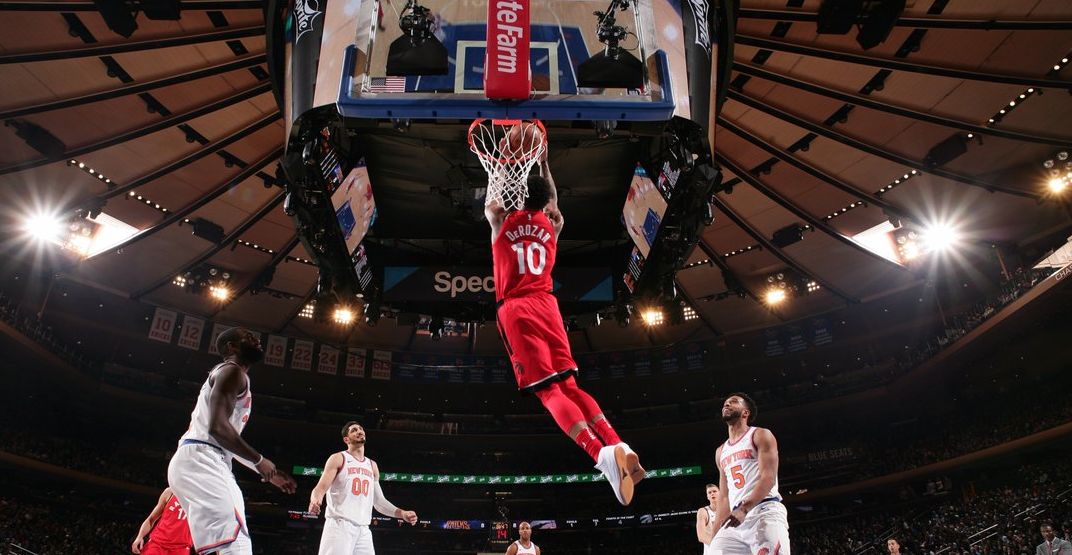 The Toronto Raptors are fun to watch this season.

With an improved, faster style of play, and a roster full of bouncy athletes, it’s easy to see why the Raptors have a wealth of highlights.

Here are the top plays from November 29 to December 5.

1. DeRozan punches it vs Hornets

The Charlotte Hornets came into Toronto fresh off of two losses against the Cleveland Cavaliers and the San Antonio Spurs. And to add insult to injury, Kemba Walker sat out due to an injury.

Don’t let the semi-manageable score fool you—the Raptors were in control for most of the game with a lead as large as 19. The Hornets managed to close the distance in the third, and made it somewhat competitive in the fourth, but the Raptors flipped the switch in the final minutes.

DeMar DeRozan and Kyle Lowry combined for an impressive 66 points, and their on-court bromance was on full display with this DeRozan rim-rattler, which sealed the victory for the Raptors.

They don’t call him Serge Iblocka for no reason.

The Indiana Pacers stole a win from the Raptors in their last meeting, halting their five-game winning streak.

Ibaka had some pep to his step in this contest, and demonstrated it with the chase down stuff on Bogan Bogdanovic.

Blowing by the defence and embarrassing opposing defenders is just another day in the office for Norman Powell.

Going into their final game of the home stand, the Raptors took on a Phoenix Suns team playing on the second night of a back-to-back.

The fatigue was apparent early on for the Suns.

Poor defence was combined with a lack of offensive punch, which included their young stud, Devin Booker, who was held to six points and zero field goals in the first half.

DeRozan played with the defence all night, going for one of the easiest 20-point performances despite many missed calls.

DeRozan is one of the most creative scorers in the league, and in this sequence, he showed just that.

It was ‘Giants of Africa’ night in Toronto, and the organization paid tribute to Nelson Mandela with past NBA players in attendance.

With Dikembe Mutombo sitting courtside, it was only appropriate for Ibaka to give Alex Len the finger wag after stuffing his shot attempt.

It was even cooler to see Mutumbo’s reaction and approval afterwards.