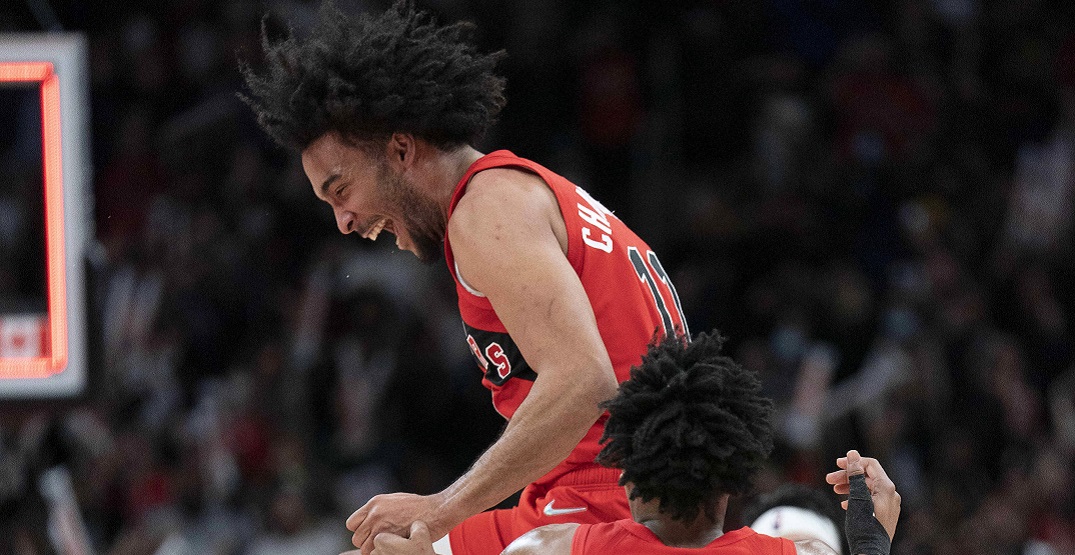 Toronto Raptors rookie Justin Champagnie almost had a buzzer-beater for the ages, but it was not to be.

With 8.9  seconds left, the Raptors were inbounding the ball, down just one point after trailing by 14 midway through the fourth quarter against the Oklahoma City Thunder. After taking a 10-point lead into halftime, a late surge offered Toronto a shot at redemption.

Champagnie managed to tip in the ball off a circus shot attempted by Fred VanVleet in what looked at first glance good enough to give the Raptors a 111-110 win.

Originally, the shot was called a basket, but video review overturned the call.

Replays gave evidence that the Raptors’ attempt at a buzzer beater fell just short, missing by just one-tenth of a second.

Justin Champagnie was a TENTH OF A SECOND away from winning the game for the Raptors. 🙃 pic.twitter.com/Pk7KPCcWW5

Video inside the arena showed that just about everyone thought the basket went in on time. If you look closely the arena scoreboard actually showed 0.3 seconds left on the clock when the final buzzer sounded, though the net scoreboard (which is official) had run out. It’s not clear why there is a discrepancy.

“I thought I had it,” Champagnie said. “But you live and learn, onto the next one.”

Before the tip-in attempt, Champagnie had another big moment —  putting the Raptors up 109-107 on a close-range shot with 18 seconds left.

Champagnie, who had not played more than eight minutes in any of his ten NBA games previously, played all 12 minutes of the fourth quarter after not playing any of the first 36 minutes.

“I’ve been waiting for this moment for a while now,” Champagnie added. “I always have the most confidence in myself. I’m ready. I always tell myself, mentally, ‘be ready.'”

The Raptors play next at home on Friday night against the New York Knicks, with tip-off set for 7:30 pm.