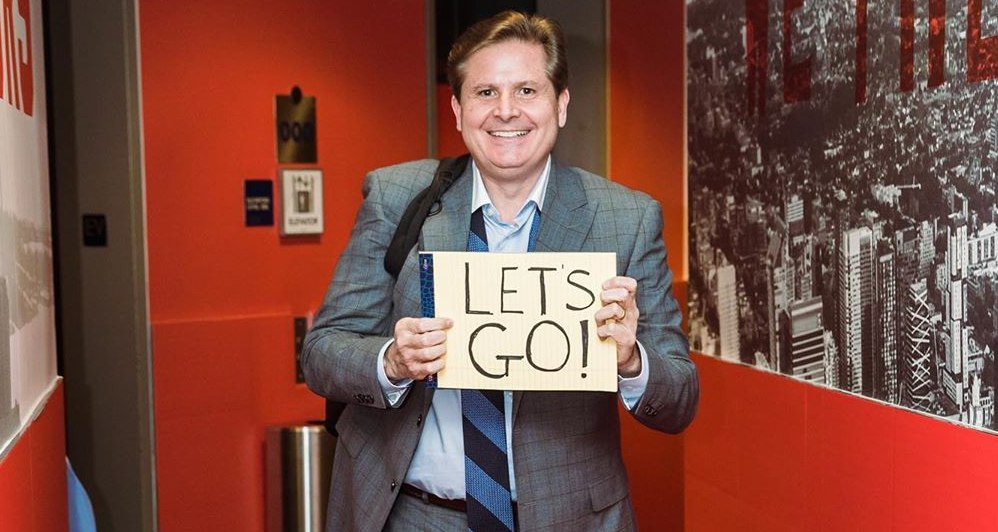 From the peak of Mount Saint Elias in the Yukon to the tip of Cape Spear in Newfoundland, the Toronto Raptors have united a nation.

The Raptors’ magical run to the NBA Finals has seen their fan-base explode across Canada. Jurassic Park has evolved into Jurassic World, with dozens of cities hosting Jurassic Park-like events throughout the NBA playoffs.

The Raptors play-by-play announcer for both TSN and Sportsnet, Matt Devlin, is bringing fans together in his own unique way; by shouting-out Canadian cities with his signature call on the television broadcast.

Whenever a Raptors player sinks a three-point shot at home, Devlin rattles off a phrase as a tribute to a Canadian locale. For example: “From Halifax,” “From Mississauga,” or “From Yellowknife.”

Hand up, hand down.

Devlin, who began calling Raptors games in 2008, told Daily Hive that the genesis of his signature call was born by chance about six years ago during a Raptors playoff game.

“Kyle [Lowry] hit a long shot and I think I said: ‘From Mississauga.’ As you’re calling a basketball game and a player shoots a three, it’s typically: ‘From downtown,’” Devlin explained.

“Then, of course, your mind kind of takes you to, if it’s really deep, maybe it’s from a town outside of the town which you’re calling the game.

“So, it started to grow organically.”

How does he select the cities he’ll shout-out on the Raptors broadcast? Despite some interesting fan theories, the Syracuse, New York native doesn’t have a map of Canada next to him, nor does he have an alphabetical list of all the Canadian cities to reference during the Raptors broadcast.

Devlin explained that the shout-outs are mostly driven by Raptors fans who suggest their towns to him on Twitter (he’s @Matt__Devlin, by the way).

“I’ve never had a plan going into a game that I’m going to shout-out one town or another,” Devlin said. “However, over the last couple of years now on Twitter, I’m getting requests all the time. Jack [Armstrong] and Leo [Rautins] will say: ‘Hey, can you shout-out this town? This person asked.’”

Devlin said he’s deviated from that formula on two occasions: the first two games of the NBA Finals in Toronto.

“Game 1, I planned on using all the capitals of the 10 provinces and the three territories,” Devlin said. “It just so happened that the Raptors hit 13 threes. That’s what was amazing about Game 1; they made exactly 13. I had no idea what I was going to do if they didn’t make 13 or if they made more than 13.”

With the @Raptors flooding the US sports networks this Finals series, let’s take a moment to show our appreciation for @Matt__Devlin, our trusty play-by-play sportscaster. His nation-wide city shoutouts are a staple of the game and showcase just how far our fan base stretches. pic.twitter.com/D6hiEBkdU7

Luckily for the Raptors, every province got a mention during Game 1 of the NBA Finals. From Victoria, BC, to St. John’s, Newfoundland to Whitehorse, Yukon. Every province was represented, if by some strange twist of fate where 13 was the lucky number.

For the second game of the NBA Finals, Devlin went off the script once again. Instead of choosing cities at random or by suggestions through Twitter, he opted to use his signature three-point call to pay homage to the birthplaces of some homegrown Canadian NBA players.

“Game 2, I thought it would be really cool to shout-out the hometowns of where the current NBA players grew up or were born. That’s why in Game 2, you had Pickering, Hamilton, and Kitchener; because of Cory Joseph, Jamal Murray, and Shai Gilgeous-Alexander.”

Surely, geography teachers across the country appreciate how the Raptors play-by-play voice has made it cool to riff off Canadian cities at random. Even Devlin himself has learned a thing or two from this exercise.

“One of the things that has grown from this is you end up going: ‘Where is that?’, Devlin said. “So, you do start learning more about towns and cities.”

If you are a grade 9 Canadian geography teacher you should play the Raptors game in your class and make the students find all the cities Matt Devlin mentions on a blank map.

More than any other professional sport in North America, basketball is a global game. Through his shout-outs to Canadian cities, Devlin quickly realized how vast the Raptors’ fan base spreads across Canada.

“The more you do it, the more you connect with all the basketball fans across the country,” Devlin said. “To me, that’s what makes it special. It’s a window into what the game of basketball means. Just how united the fan-base is and what is ultimately happening with the Raptors right now.”

Game 5 of the NBA Finals returns to Toronto on Monday and Raptors fans will surely be glued to the television set, waiting to see if their hometown gets a shout-out from “Matty D.”