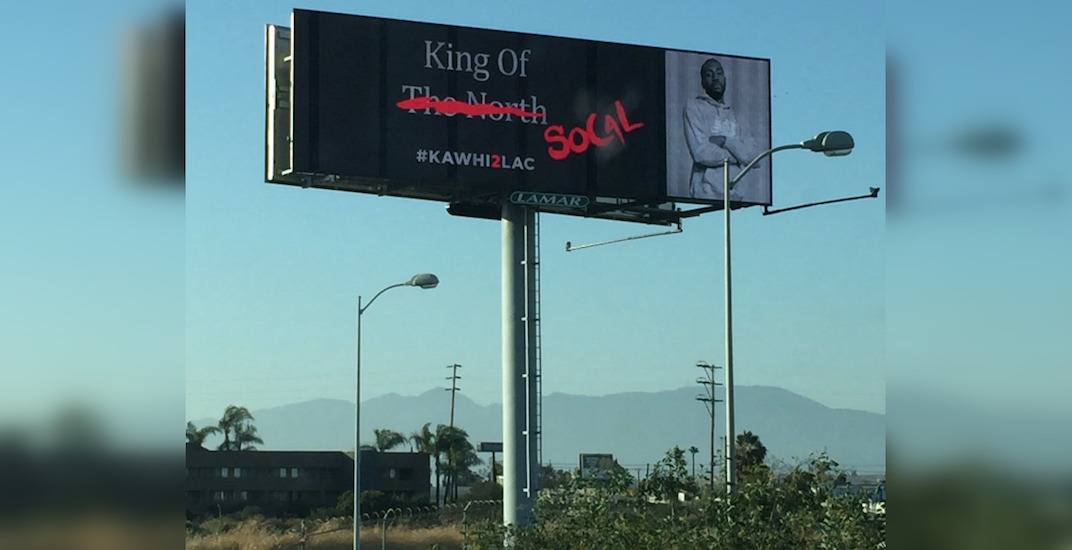 Kawhi Leonard is set to become an unrestricted free agent and the wooing has already begun.

A pair of digital billboards in Los Angeles are attempting to convince the Toronto Raptors superstar to play for the Clippers.

One billboard is a play on the ‘King of the North’ one New Balance set up in Oakland during the NBA Finals. That one is calling Kawhi the “King of SoCal,” with the hashtag #KAWHI2LAC below it.

The other billboard shows “KAWHI” on a California license plate, accompanied with the #ClipperNation hashtag.

Free agency around the corner? Must be billboard season in LA. pic.twitter.com/2MAVZ8Yvwx

The billboards are located on Interstate 5 in Downey, about 10 miles southeast of the Staples Center, according to ESPN.

The Clippers, of course, are thought to be in the running to land Leonard, a native of southern California, in free agency. The Raptors are now the favourites though, according to a recent report from Yahoo Sports.

ESPN reports that the Clippers “knew nothing” about the billboards.

Rival teams will be permitted to meet with Kawhi beginning on June 30, when the NBA’s free agent negotiating period opens.

This isn’t the first time billboards have been used as a recruiting tactic to land an NBA superstar.

Los Angeles is getting in on the "Recruit LeBron with a billboard" game. pic.twitter.com/7hHJnveXci

Billboards popped up in a number of NBA cities last summer in attempts to land LeBron James, who eventually signed with the LA Lakers.