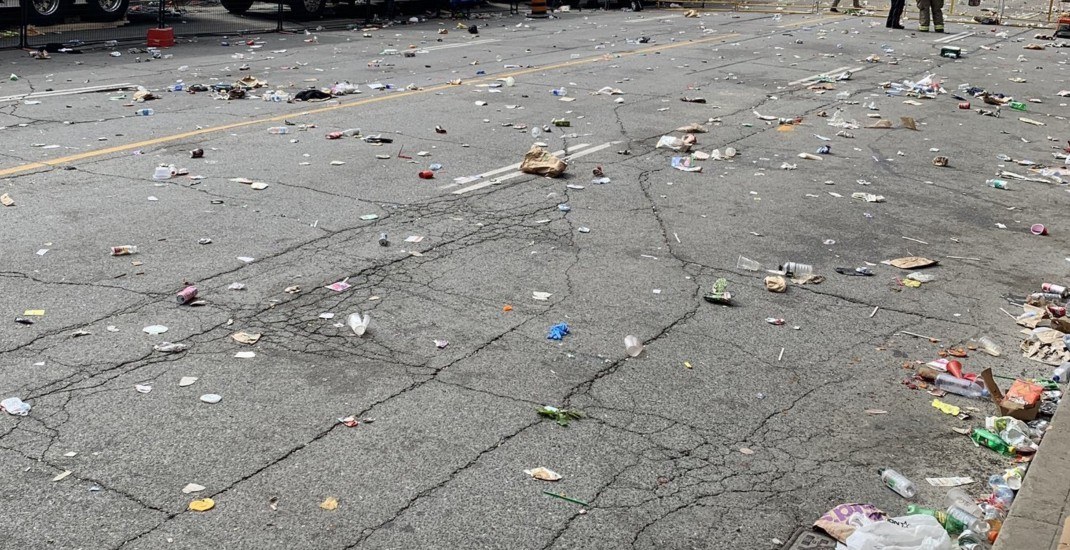 The massive parade for the Raptors, honouring their first-ever NBA Championship, has ended — but the clean up has just begun.

Paradegoers who joined in on today’s massive celebrations seemed to forget that picking up after themselves is important.

Images showing piles of trash along the parade route were shared on social media.

it is really upsetting to see so much litter in garden beds/streets/parks as a result of today’s #RaptorParade . If you can’t pick up after yourself you’re trash. Use a bin!!! this is disgusting and infuriating and so disrespectful to Toronto and those who live here. pic.twitter.com/YfmKnHejMT

The real MVPs from today’s #RaptorsParade are the City’s cleaning crew who will be working hard tonight to get everything back in good shape. Mountains of garbage out there pic.twitter.com/5W2xZmXE1i

And people were definitely not happy about the trashy aftermath.

Do I’m a cynic. Here’s my takeaway from watching the Raptors parade: people in Toronto are pigs. Pick up your garbage and take it with you. Dispose of it. Don’t leave it on the streets

Loved the energy at the parade. But people please god damn pick up your own garbage. You can have fun and be civilized at the same time. #RaptorsParade

Long shot…but it’d be super cool if every person picked up a piece of garbage or water bottle on the ground & disposed of it on their way home from the celebrations.
🤷‍♀️😋
It’s looking pretty messy. #garbage #CleanUp #trash #Recycle #Toronto #Parade pic.twitter.com/y1XDBxRcdO

Policy for big parades and parties: everyone must bring a bag for garbage collection. #topoli #onpoli

Hoooo my goodness people sure did leave a lot of trash around that raptor’s parade. Looks like an incredibly inhabited wasteland out there

The parade, which began at Princes’ Boulevard at 10 am, continued along Lakeshore, York Street and University Avenue before finishing up at Nathan Phillips Square.

The City of Toronto has not announced the official number of people in attendance it’s estimated that nearly 2 million flooded the streets to cheer on the championship team.

While the day began with jubilation, a shooting in the midst of the celebrations at Nathan Phillips Square in downtown Toronto left four people with injuries, according to police.

-With files from Kayla Gladysz and Eric Zimmer.