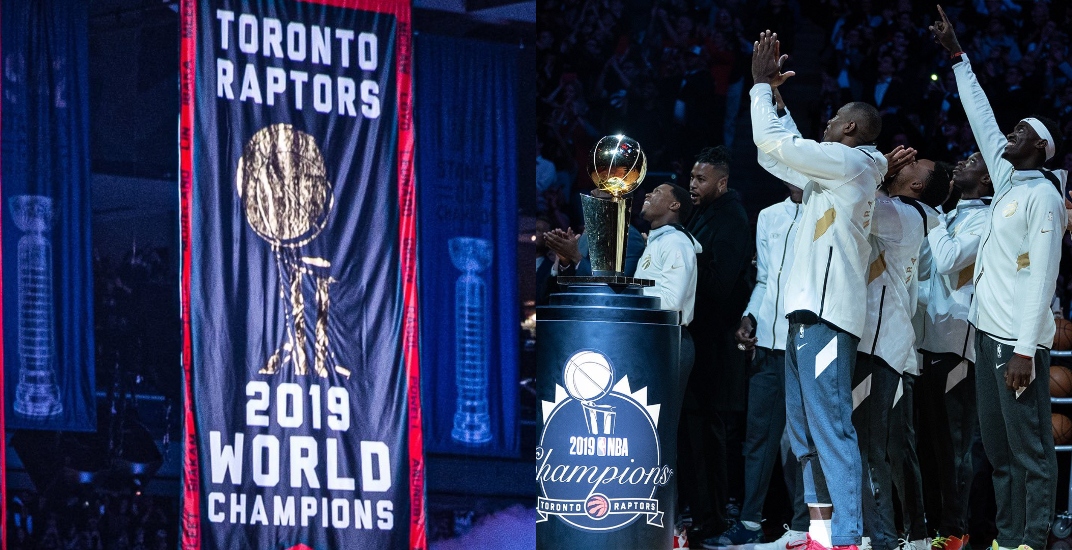 It was a banner night to remember.

The Toronto Raptors took a moment to re-live and celebrate the historic accomplishment that was achieved last season ahead of the tipoff to their 2019-20 NBA campaign.

In front of a packed Scotiabank Arena, the organization received their individual championship rings as well as unveiled the banner that will be hanging from the rafters forevermore.

THIS PARTY HAS STARTED IN TORONTO pic.twitter.com/1663fMeyVe

The rings came first and prior to the ceremony, fans got their first peek at the 2019 bling with replicas being handed out at Scotiabank Arena

Along with the unveiling of the rings came a video that the Raps dropped on social media.

Our first will never be forgotten. #WeTheNorth pic.twitter.com/OCr0jOdj09

The video reflects on the power of firsts and with it comes chills.

To help celebrate the champs and bring in a new basketball season, NBA Commissioner Adam Silver was on hand and he, along with Raptors upper management, proceeded to hand out the gold.

When you're an NBA Champ. 💍 @Raptors | #WeTheNorth pic.twitter.com/DGiLmOHdRd

Some cheered, some posed as each individual member of the team got their moment and the captured reactions say it all.

Soakin’ it all in 🤩 pic.twitter.com/see12f7dtC

It was only fitting that the microphone was handed over to point guard Kyle Lowry to address the fans following the rings ceremony.

“We wouldn’t have been able to do it this without you guys.

Kyle Lowry gives a shoutout to the fans, city of Toronto, and Canada. 🇨🇦#WeTheNorth pic.twitter.com/i8yVyzMyMb

“We wouldn’t have been able to do it without you,” Lowry said.

After a few words, the beloved point guard gathered his teammates to help unveil the banner.

A special moment in Toronto! 🙌🏆 pic.twitter.com/eGS6FwmuEb

This is a thing that happened. pic.twitter.com/QDd0qKMnjS

‘Toronto Raptors – 2019 World Champions.’ Words that will be immortalized in the continually evolving tapestry of Canadian basketball.

From ‘The Shot’ to the parade it was a roller coaster of year that led The North to a championship and it won’t soon be forgotten with Scotiabank Arena’s newest permanent fixture.

The team proceeded to face the New Orleans Pelicans, who watched the banner ceremony courtside, to open up the 2019-20 NBA season.