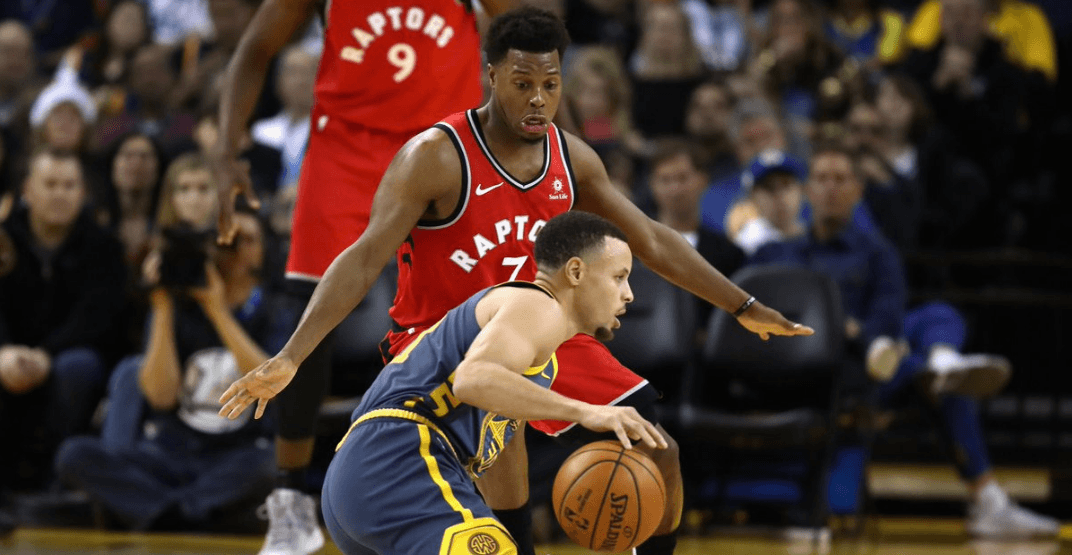 No Kawhi, no problem.

The Toronto Raptors made a statement on Wednesday night, blowing the Golden State Warriors out of the building with a 113-93 victory, on the second night of back-to-back road games, and without their star player due to a hip injury.

Unlike the last time these two teams met, there are no built in excuses for the Warriors. The defending champions had Steph Curry and Draymond Green back in the lineup.

But it didn’t matter.

The win snapped Toronto’s 13-game losing streak at Oracle Arena. The 20-point defeat tied the Warriors’ fourth-worst home loss since 2014-15. The 93 points accumulated by Golden State was also the fourth-lowest total in the 107 games that Curry, Kevin Durant, Klay Thompson and Green all played.

The Raptors’ performance was so good, they got Durant’s attention.

Kyle Lowry’s slump is a thing of the past.

Leading the way for the Raptors in Kawhi Leonard’s absence, Lowry stuffed the stat sheet with an impressive line of 23 points, 12 assists, five rebounds and three steals.

However, Lowry had some help from his fellow starters who all scored in double-digits.

The Raptors defended the three-point line well; the bread and butter of the Warriors’ offensive game plan. Golden State was held to 23% from three-point land overall, while keeping three of the four All-Stars, Steph Curry, Klay Thompson, and Draymond Green in check.

They combined for only 26 points on a poor 32% from the field.

In the first meeting between these two teams, the Warriors were without Steph Curry and Draymond Green due to injury. A 51-point performance from Kevin Durant allowed the Warriors to claw back into what was initially a blowout, sending the game into OT which Toronto eventually won.

This time, on the road, the Raptors were able to build a big lead and didn’t leave any room for doubt, dominating the full 48 minutes and preventing the Warriors from getting within distance.

This is only the 3rd time in NBA history an Eastern Time Zone team played a Pacific Time Zone team on the road on back-to-back days and won both by 20+ points.

The Raptors are now 7-1 in games without Leonard in the lineup, 12-3 away from Toronto for the best road record in the league, and are 2-0 out of four games during this current west coast road trip.

They will be in Portland on Friday night to take on Damian Lillard and the Trail Blazers.