A storm sweeping through Vancouver on September 9, 2019. (Christopher Bowes)

Any time spent outdoors over the coming days will likely require an umbrella.

Despite Tuesday’s clear skies, Environment Canada is calling for rain in Metro Vancouver throughout the remainder of the week.

Tuesday will end with a chance of showers before shifting to periods of rain overnight.

Steady precipitation will kick in on Wednesday and will carry over until Friday during the daytime, which is predicted to be the only sunny period over the next six days.

Showers return on Friday night and will continue throughout the weekend. 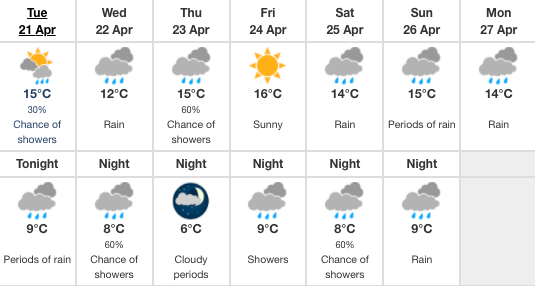 This week’s coming stretch of rain follows a long run of sunny and warm conditions, which drew dense crowds to Vancouver’s seawall, beaches, and parks.

While provincial health officer Dr. Bonnie Henry says that its essential to spend time outdoors for physical activity, municipal governments are stressing that people remain within their own neighbourhood.