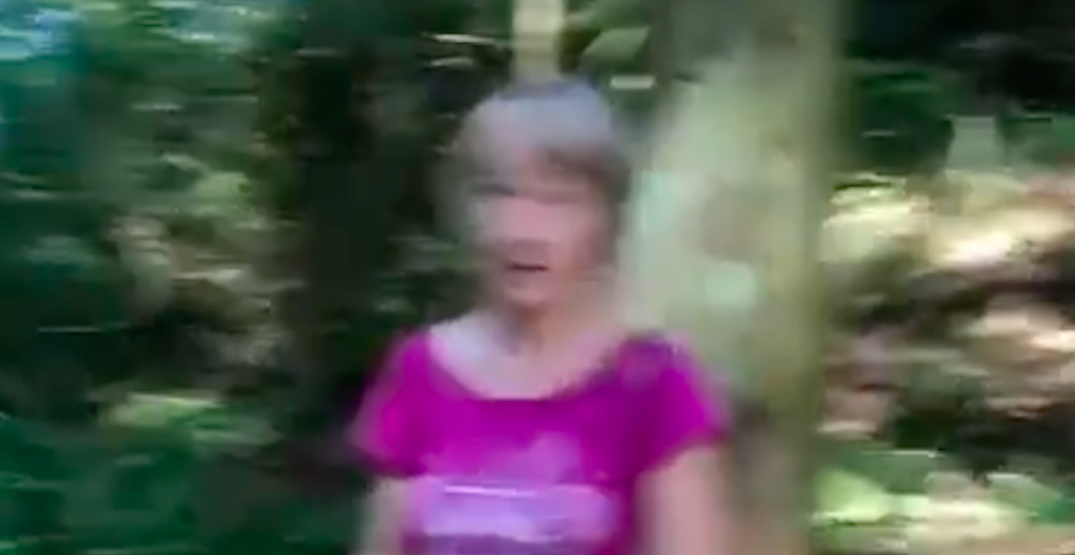 A woman’s racist remarks during a confrontation at Metro Vancouver park over the weekend were captured on video after she approached two other women who were attempting to pick some berries from a bush on a local trail.

In an email, Coquitlam resident Elika Gholizadeh – one of the two women on the receiving end of the remarks – told Daily Hive the incident happened Sunday on the High Knoll Trail at Minnekhada Regional Park, while she and her friend were looking at a sign for directions.

Gholizadeh said the woman approached them and asked why they had branches and why they thought it was okay to remove branches from trees.

According to Metro Vancouver Parks’ official guidelines, all visitors are asked to leave vegetation, driftwood, rocks, and other natural materials undisturbed to protect park habitats.

For her part, Gholizadeh said she and her friend “genuinely were not aware that there was a bylaw in place against picking at the small branches and we would have understood the woman’s concern for the environment, had she not approached us in such a condescending and rude manner.”

However, that’s not how things went, and as the situation progressed, Gholizadeh began to film the interaction.

In the video, the woman tells the girls they are “acting like six-year-olds,” and when they tell her to mind her own business, the woman responds, “That is the f*cking rudest thing you’ve said to me.”

She then tells the girls to “go back where they came from.”

In response, the pair can be heard calling the woman a colonizer in the video, and suggest she herself should go back where she came from.

The woman responds by asking if either of them are First Nations, and when they respond that they are not, she says not to call her a colonizer. Noting that they were both born and raised in BC, the pair then ask the woman where exactly she’s from, at which point the woman reveals that she’s originally from the US, but now lives in BC.

Gholizadeh’s mom shared video of the interaction on social media.

Asked if she had filed any report of the incident with local authorities, Gholizadeh said she didn’t, and after the video, “we just ended up walking away.”

Following the incident, Coquitlam Mayor Richard Stewart spoke about the incident on social media, stating that he “can’t believe” the woman “used the ‘go back to where you came from’ line.”

As for what led to the confrontation, Stewart said he suspects the woman “meant ‘pick berries, yes, but don’t damage the plants please, or there will be no more berries. We all want to protect the park.’ Or something like that.”

However, “she conveyed her message incredibly badly, and when her buttons were pushed she included an extremely offensive comment.”

Unfortunately, he furthered, “people generally don’t say ‘Go back to where you came from’ unless that sentiment is ingrained in their thoughts. Unless they feel like they are more entitled to be here than they judge you to be.”

He added that it’s “sad and tragic that someone who admits to being an immigrant – albeit from the US – would judge someone else as worthy of “go back to where you came from” presumably because of the colour of her skin.”‘

Stewart said he was sorry to hear of the incident and reminded people “our parks are for everyone.”