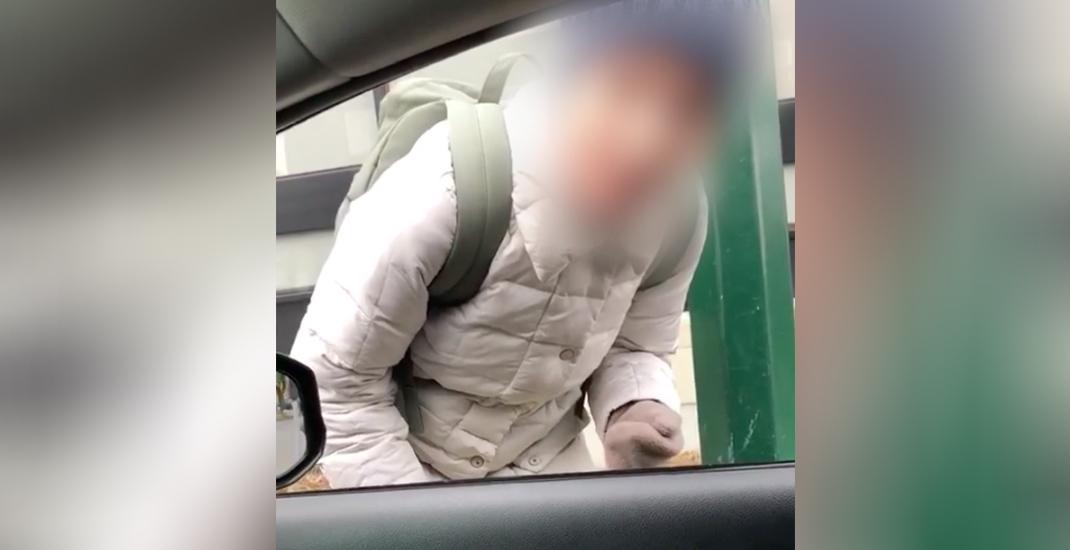 A Vancouver woman who was the victim of a racist rant by another woman on Thursday has posted a video of the encounter online.

The video was captured by Anika Vassell, who said the incident took place “in the middle of the day” on Broadway and Ontario Street.

“As I got into my car, this lady tapped on my window twice – because I didn’t open my window the first time – then when I finally rolled down my window she asked me “where are you from?'” Vassell wrote in the post.

Having been born and raised in the city, Vassell told the woman she was from Vancouver.

However, she said, her answer “didn’t satisfy” the woman and “she continued to probe to find out what country I’m from.”

When Vassell finally told her that she was of Jamaican and South African descent, the woman answered by saying “and you’re that black?”

Vassell said the woman’s repsonse initially made her angry and she rolled her window up and prepared to drive away, but realized that the woman “wasn’t finished with her racist remarks that were directed at me and my black skin.”

It was at this point, Vassell said, that she rolled her window down again and “the video I took of her speaks for itself.”

The attack, she added, left her “really shaken.”

On Friday, Vassell said she had “just” reported the incident to police, but said it was not filed as an official report because the incident “was not physical, violent, and due to the time lapse since the video was taken.”

“It makes me sad”

Reflecting on the video, Vassell said that she “can’t even say” that she’s angry anymore, just sad.

“It made me sad that someone targeted me solely based on my skin colour,” she told Daily Hive.

“It makes me sad that at the start of a New Year when many people are most optimistic about what is in store for them, there are just as many who feel obligated and entitled to tell others that they don’t belong.”

Vassell added that she “did not do anything to warrant this behaviour or assault from this strange woman. “We did not exchange looks, or words and I didn’t cut her off or anything.”

She noted that she does “really do make an effort to avoid conflict but unfortunately, the colour of my skin makes me a target for verbal abuse and racism.”

Vassell also hopes some good can come from her sharing of the video.

“I realized… it can happen to anyone and probably does happen to many people of any visible minority,” she said. “Since posting the video thats exactly the type of feedback that I have been getting from my peers, and because it is verbal and non-physical these encounters tend to fly under the radar.”

Moving forward from this incident, Vassell said she would like to see the video “continue to spark the conversation that it has already started about racism, whether blatant or subtle.”