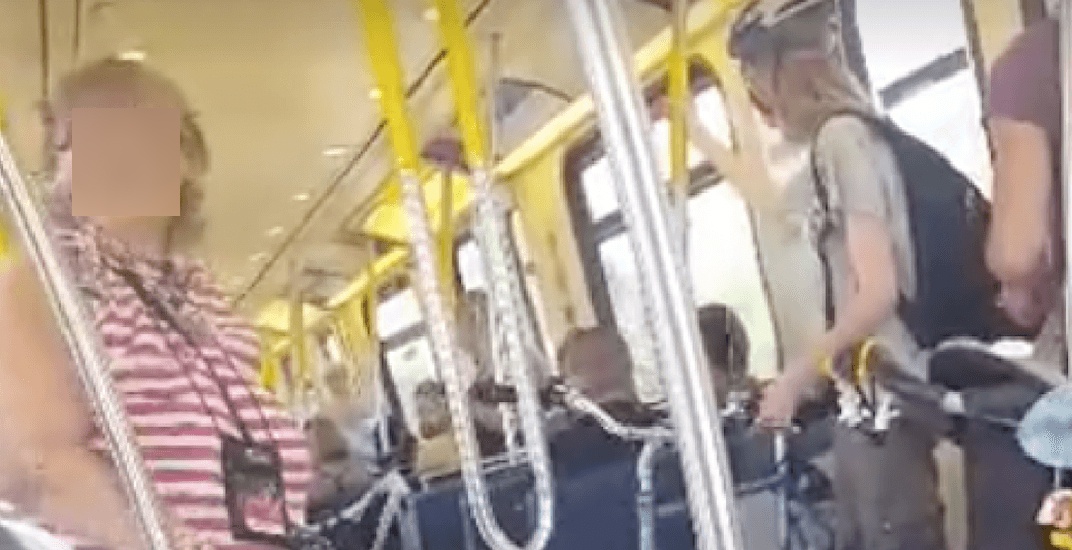 The woman in this picture told another passenger to "go back to the f**king Philippines". ( Ashley Klassen / Facebook video screencap)

In the video posted to Facebook by Ashley Klassen, a woman standing on the train yells at another passenger who is sitting down to “go back to the f**king Philippines”.

The person she is yelling at can’t be seen in the video, but can be heard responding to the woman by telling her “don’t say say that”.

The standing woman then yells that she will “say what I want.”

At this point, another passenger tells the woman to “get the f**k off the train.”

The woman, wearing a striped shirt and pink sunglasses, then turns around and shouts back angrily at him, “why don’t you?”

The man then tells her she is being racist and the woman responds, “I’m not racist, I asked them to talk a little quieter.”

The exchange then continues for a few minutes with the woman chirping things like “I have a big fat ass and a brain – much more than you have little boy.”

Eventually the woman does get off at the next stop, but not before getting one last dig in at the woman sitting down.

In her description of the video, Klassen writes it “is probably the most disgusting thing I’ve ever seen. Unfiltered Vancouver racism. Shout out to the kid up front.”

On Wednesday, Transit Police said they were made aware of the incident.

They concluded it occurred at approximately 2 pm on the Millennium Line, between Sperling/Burnaby Lake Station and Brentwood Town Centre Station.

The video was reviewed by the agency as well and the woman in question was identified as a 75-year-old New Westminster resident.

Police said the woman is known to them for “documented anger related issues in the past.”

However, they added, “there is nothing documented that would indicate there is a concern for public safety.”