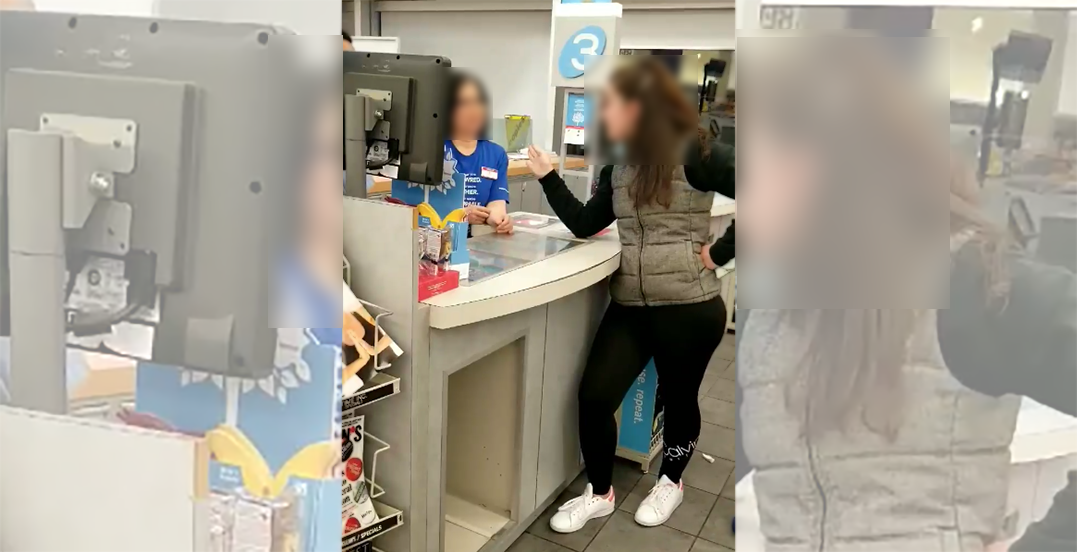 A screencapture of a video uploaded to Facebook by Allen Tseng.

A video uploaded and shared on social media has captured a disturbing, racist encounter between a customer and several staff members at a Shoppers Drug Mart, located on Kingsway and McMurray in Burnaby, BC.

The two-minute clip, captured and shared by Allen, shows a woman yelling at two staff members who were standing at the checkout. The context of the argument’s start is unclear from the video. During the entire incident, the woman is accompanied by a young boy.

As the exchange continues, another employee joins the conversation, appearing to offer a discount or price correction to the women.

When the customer is given information about speaking to a manager, however, she once again raises her voice at the employees.

“If you want to talk to me, you bring your manager here, you idiot,” the woman says. “Or go speak Chinese with your other staff and go sh*t talk me somewhere else.

Allen says that although he’s not completely sure what caused the exchange, it appeared to “some sort of dispute” over a transaction.

“I didn’t get involved, I thought it would have been pointless because of how irrational this person was,” he tells Daily Hive. “She was visibly becoming more agitated and aggressive even when more staff addressed the situation.”

“My immediate reaction was that this sort of behaviour needs to be exposed. I also felt sad for the employees because they had to deal with that sort of verbal abuse.”

Since being posted on Monday evening, the video has been viewed more than 130,000 times.