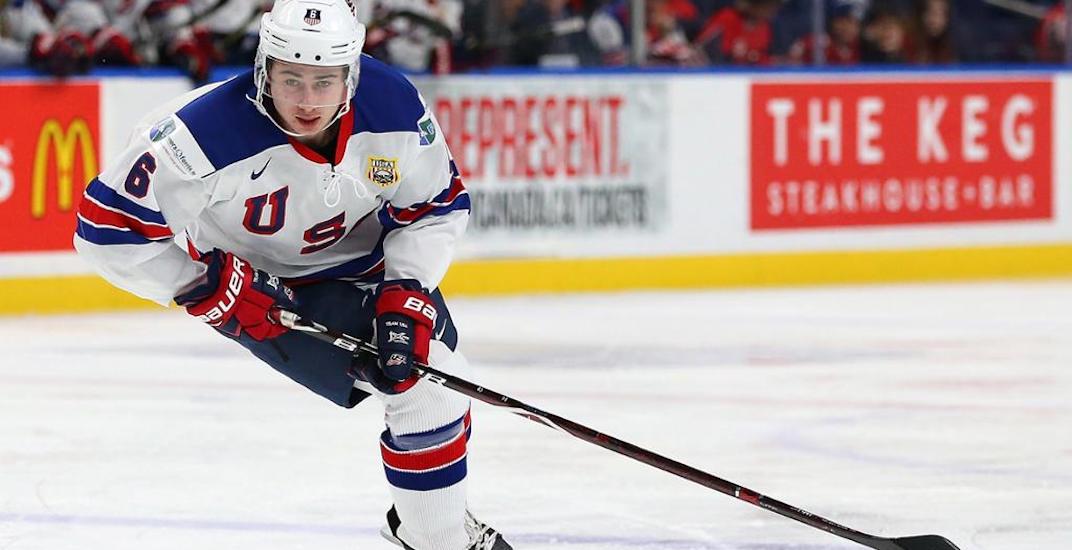 Canucks fans will have to wait a little bit longer to see Quinn Hughes don a blue and green jersey.

On Wednesday morning, the 19-year-old defenceman had an MRI on his bruised ankle. The Vancouver Canucks tweeted that until results came in, he was told not to skate.

Quinn Hughes, meeting the Vancouver media, said he had an MRI on his ankle this morning. He’s awaiting results and was told not to skate today. pic.twitter.com/EtY8q9RdEo

During the postgame interview, after a game against the New York Rangers, Head Coach Travis Green announced that the Michigan prospect wouldn’t skate for at least another week.

“He’s got a pretty good bone bruise,” said Green. “So he’s in a walking boot for a week. We’ll re-evaluate him next week.”

The injury comes from a blocked shot during Hughes’ last NCAA playoff game, a game that the University of Michigan dropped to Minnesota in a 4-1 loss.

One day after his college career came to an end, he turned pro, signing a three-year, entry-level contract.

He leaves Michigan with 33 points (5-28-33) in 30 games, as well as being a finalist for two awards: Big Ten Player of the Year and Defenceman of the Year.

Although the defenceman’s MRI results are less than ideal, the Canucks have one silver lining.

Hughes won’t be skating for at least another week. Assuming that he’s cleared to skate by Thursday, March 21, the Canucks will only have eight games remaining in the regular season.

Even if he were at full health, the Seattle expansion draft, taking place in 2021, could have limited the number of games that he plays before the season ends.

If Hughes had played 11 or more games before the end of the season, he would have been considered a third-year player in 2021, meaning that he’d take up a spot on the Canucks’ protected list. Junior and college players, as well as first and second-year pros, are exemptions.

Since the Canucks can only protect three defencemen, they would have been wise to keep the American to 10 games or fewer.

Playoff games also count towards this tally, but with the Canucks sitting at 13th place in the West, their post-season chances are looking bleak.

–with files from Rob Williams