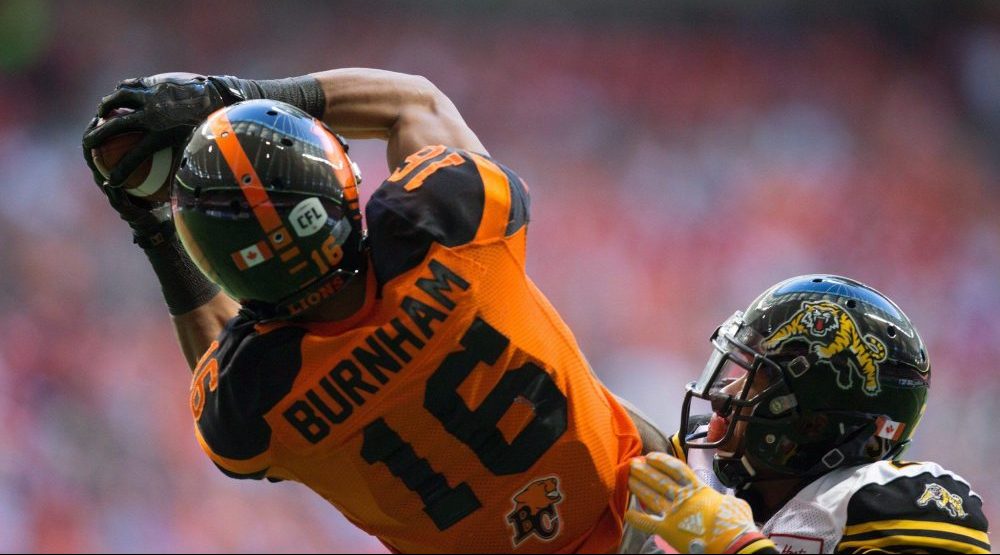 It was a fun night at BC Place as the BC Lions fended off the Hamilton Tiger-Cats on Saturday.

Wide receiver Emmanuel Arceneaux scored the game winning points on the next BC drive however, a 30-yard touchdown pass from Jonathon Jennings with 1:23 to play in regulation. BC won 45-38.

Let’s dive deeper into the game by firing up the quick-six.

The Lions came out on fire in the first quarter, strip-sacking quarterback Zach Collaros on Hamilton’s first drive of the game. Jennings’ first pass of the game was a 38-yard hookup to Bryan Burnham in the end zone for six, and the Leos offence didn’t stop there.

Jeremiah Johnson ran one in  himself as part of his 15 rushes for 62 yards on the night. And in the second quarter, the Manny Show really gave BC a cushion, separating from his man right off of the line of scrimmage. Arceneaux had five catches on the night for a team high 105 yards receiving.

On BC’s second drive in the third quarter, Jennings threw a ball to the wide side of the field, which cost him. When you’re going to throw that far, you need to make sure your receiver is totally in the clear.

Emanuel Davis comes up with a huge INT for the @Ticats and almost turns it into 6 points. #CFLGameDaypic.twitter.com/pZ9QfDbqr0

The Lions offence continued to struggled in the second half with a really conservative game plan, but made plays when they needed to. It wasn’t Jennings’ best night, but he threw for over 300 yards for the fourth consecutive game. Only Doug Flutie, Dave Dickenson, and Casey Printers have accomplished the same feat as a member of the Lions.

Chris Rainey ran one back for what should’ve been his second punt return touchdown of the season in last night’s contest. Unfortunately, the CFL referees continue to toss flags at a blasphemous rate, taking away from the fun of the game.

An absolutely embarrassing call on Rainey's return. Started blocking the kicker in front, he spins and they take away a TD. @CFLonTSN

The #CFL may want to invest in Seeing-eye dogs for the officials next season. They clearly need them

The missed no yards call nearing the end of the game was really costly for BC. Kicker Richie Leone eventually missed a 37-yard field goal which could have been an attempt south of 30 yards, if not for the flag.

This would have allowed the Lions to retain a two-possesion lead with under five minutes to play in the game.

The first of Leone’s misses was a 36-yard field goal attempt that went wide right with just under four minutes to play, which the speedy kick returner Brandon Banks took 126 yards to the house. After a successful two-point conversion, we were all tied up at 38-38.

.@TimHortons @CFL Must See Moment: @speedybanks87 turns on the jets and returns it to the house. #CFLGameDay pic.twitter.com/yr2UB5jL01

At first it looked like veteran special teamer Jason Arakgi had set the record for most special teams tackles ever in CFL history. Unfortunately, one of his four tackles on the night was counted on defence.

Arakgi, a Montreal native who played college ball at McMaster, will have to wait another week to set the new record.

He has been a part of the Lions club since 2008, and has been a team member throughout. Most individuals would never set aside their egos and embrace a full-time special teams position when a position on offence or defence is more highly-coveted. Arakgi is a rare case and has become one of the team captains on the club, taking part in the handing out of game balls post-game.

Huge congrats to @jrak45. He now has 184 special teams tackles, tied with Wade Miller for most in @CFL history! 🏈👊🙌🏽 pic.twitter.com/0NG0BBioWJ

While Hamilton’s defence really woke up in the second half, BC’s defence was throughly impressive. Talking to reporters after the game, head coach Kent Austin called the returning QB Zach Collaros’ performance “incredible”.

Nonetheless, BC’s defence continued to impress many including myself with the way they were able to put pressure on Hamilton’s O-line. The Leos’ D stalled drives all night long, and when I spoke to linebacker Solom Elimimian after the game, he praised defensive coordinator Mark Washington and the position that he puts guys in to play fast and move around.

With the win, the 5-2 Lions face Calgary at BC Place for the third time next Friday night, at BC Place. Easily the biggest game of the year, the winner of the third-game rubber match will not only place first in the West Division, but will also hold the tiebreaker at the end of the regular season if both squads finish with the same record.