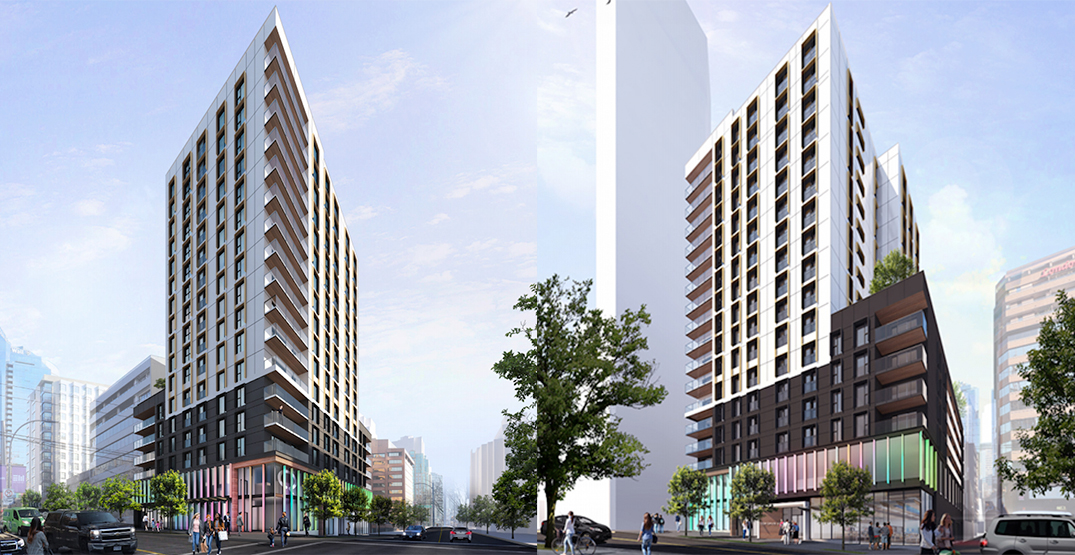 The city-owned site at the northeast corner of the intersection of Burrard Street and Davie Street in downtown Vancouver will be redeveloped into a 17-storey mass timber mixed-use tower — designed to a Passive House green building standard — with social housing and LGBTQ community and social service centre uses.

Bright rainbow-coloured glass fins for the facade of the tower’s lower floors at 1190 Burrard Street will demarcate the site as the gateway into the Davie Village from its eastern end. This architectural feature wraps around a two-level, 13,400 sq ft space for QMUNITY — a community and social service for the LGBTQ community, which is frequented by youth.

QMUNITY is currently located in a small, outdated space two blocks west on Bute Street. Plans for a new expanded home for the not-for-profit organization have been in the works for the past two decades, with this particular location confirmed by the municipal government in 2014. 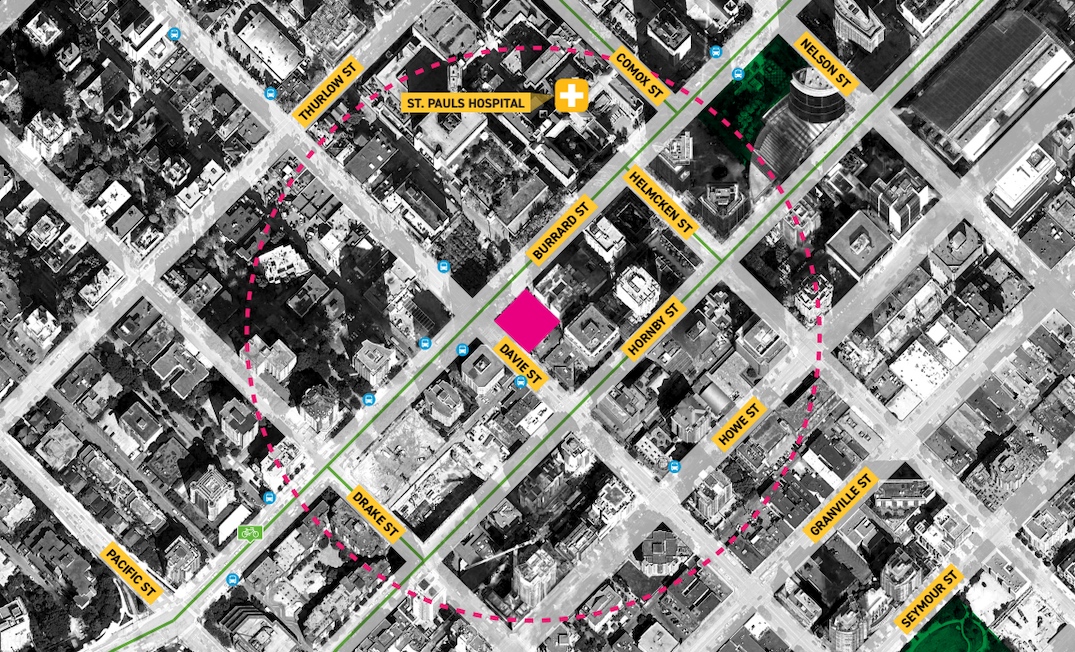 In 2017, the city announced it will also provide $7 million towards the cost of building and furnishing QMUNITY’s new space through community amenity contributions received from the nearby Burrard Gateway redevelopment.

“It is a hard project, and really a beautiful thing. The only thing not to like about this project for me is that it took 20 years, and I wish we could do a lot more of them and more quickly. But this is a fantastic example, and I’m excited to see it come to fruition,” said independent councillor Sarah Kirby-Yung.

“I think more than ever, the services are needed especially for youth who are vulnerable at their age. I don’t think we can ever take these services for granted, especially when we just saw the rainbow crosswalk in Davie Village defaced just a few days ago.” 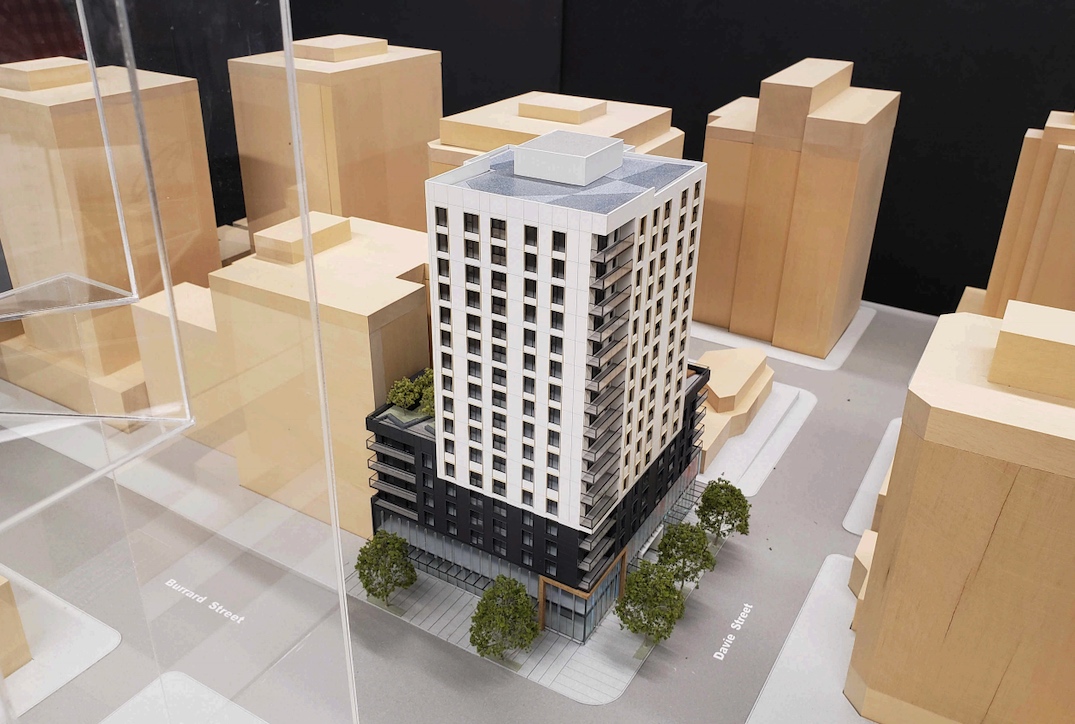 The organization offers programs and support services that support queer, transgender, and two-spirit people and improve their connection to the community. This includes free counselling, information and referrals, and one-on-one support.

“I think this project speaks to a need, it has been recognized by the community for some time. Gathering spaces are really critical to building community and safe spaces,” said independent councillor Lisa Dominato.

“That is not just about housing and space, but it’s that intangible connectedness and what role this new community service centre will serve for QMUNITY and others. That really resonated with me about how it brings hope for many things and opportunity and connectedness, and I think it’s so important in our city, particularly coming out of COVID.”

The tower will also have a minor commercial component of about 4,100 sq ft of retail and restaurant space, split between two units on the ground level. 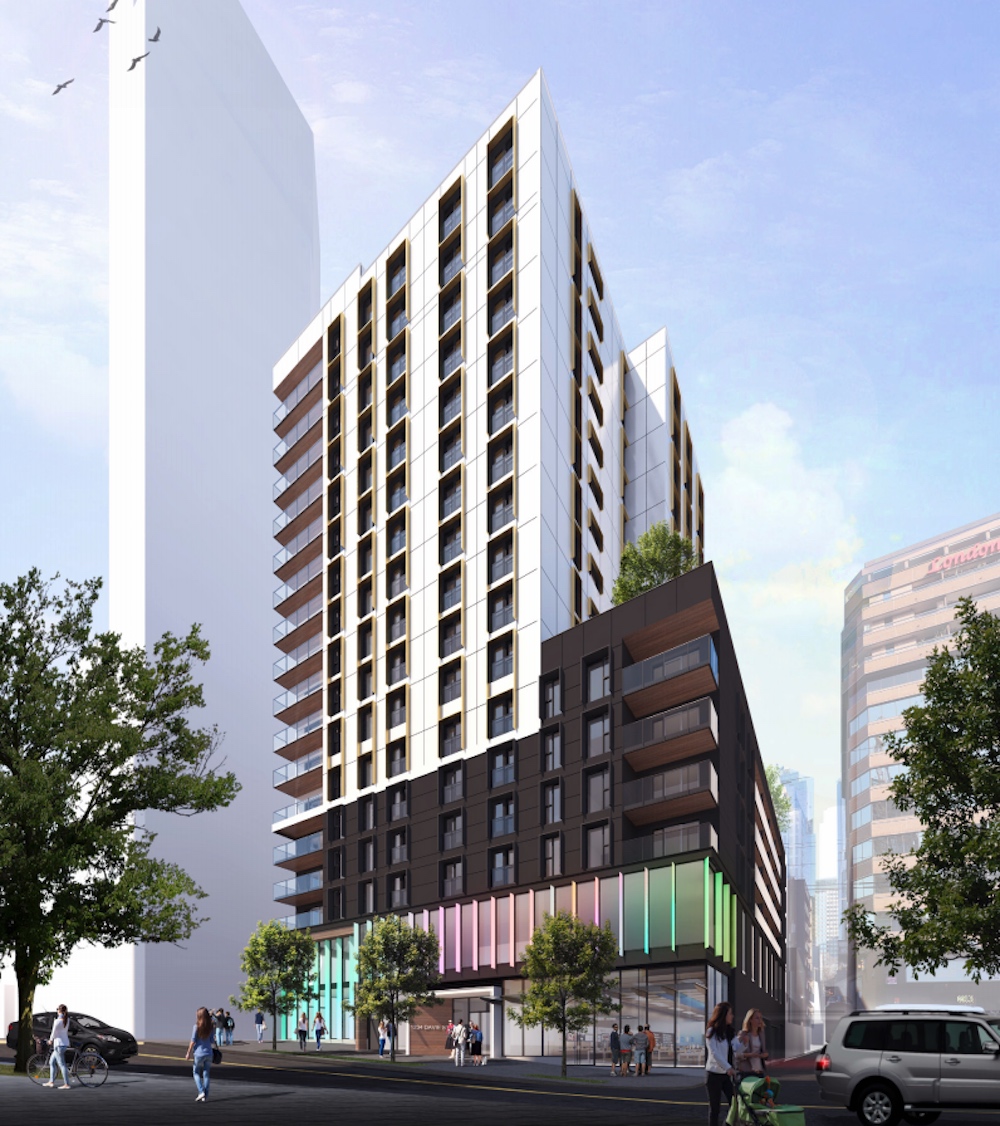 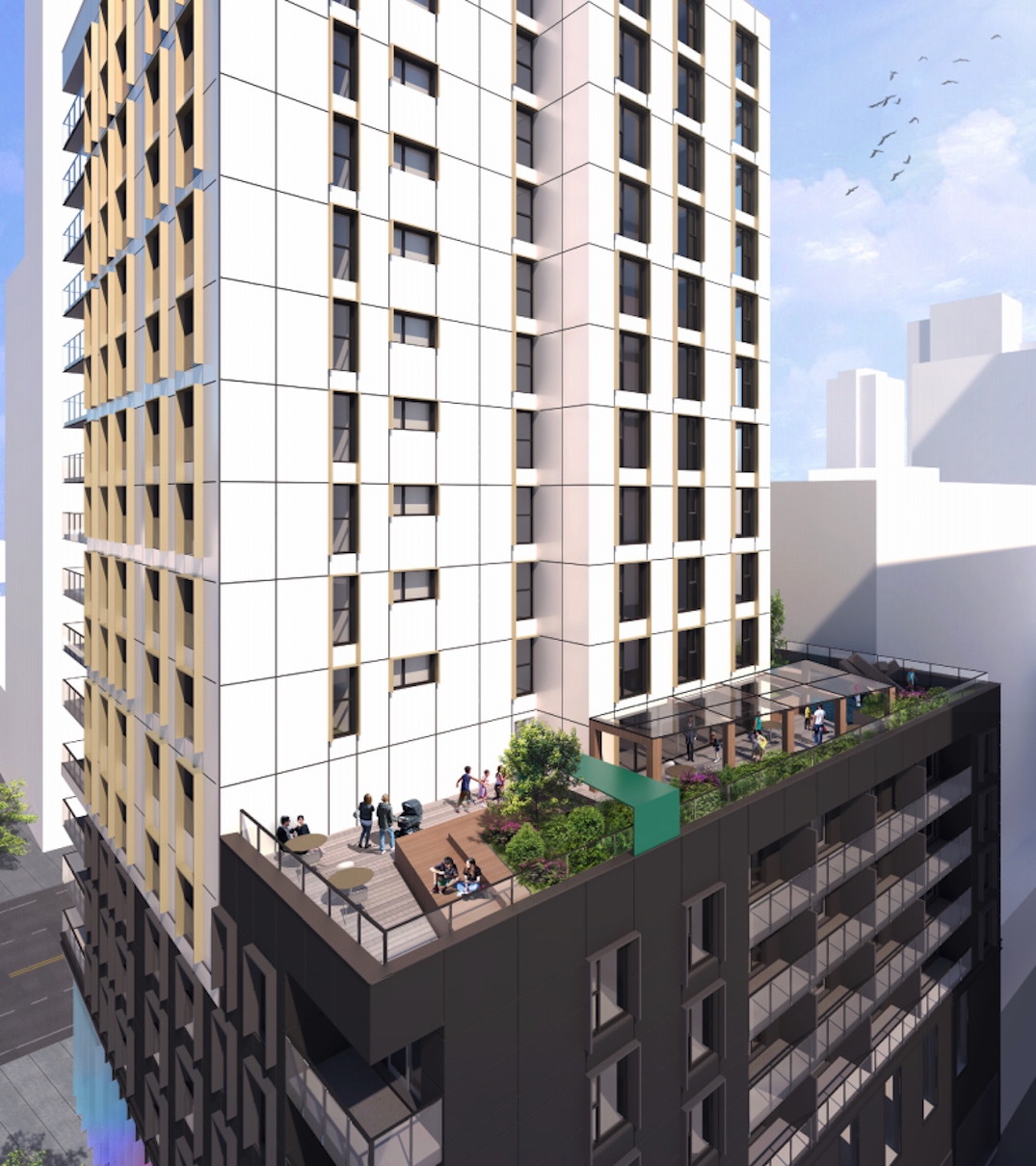 In the levels above QMUNITY, there will be 154 units of social housing, operated by the McLaren Housing Society of BC, which provides housing and support services for individuals and families living with HIV/AIDS.

The unit mix is 87 studios, 19 one-bedroom units, 44 two-bedroom units, and three three-bedroom units. At least 30% of these units will be rented to households with incomes under BC Housing’s income limits. The municipal government is seeking funding from senior governments to reduce rental rates to further improve affordability.

Residents will have access to 2,400 sq ft of indoor amenity space, as well as 4,100 sq ft of outdoor amenity space, mainly situated on the seventh level — the rooftop of the six-storey podium. This includes a garden and quiet space, fitness and play area, outdoor dining and BBQ area, and an outdoor lounge deck overlooking Davie Street. 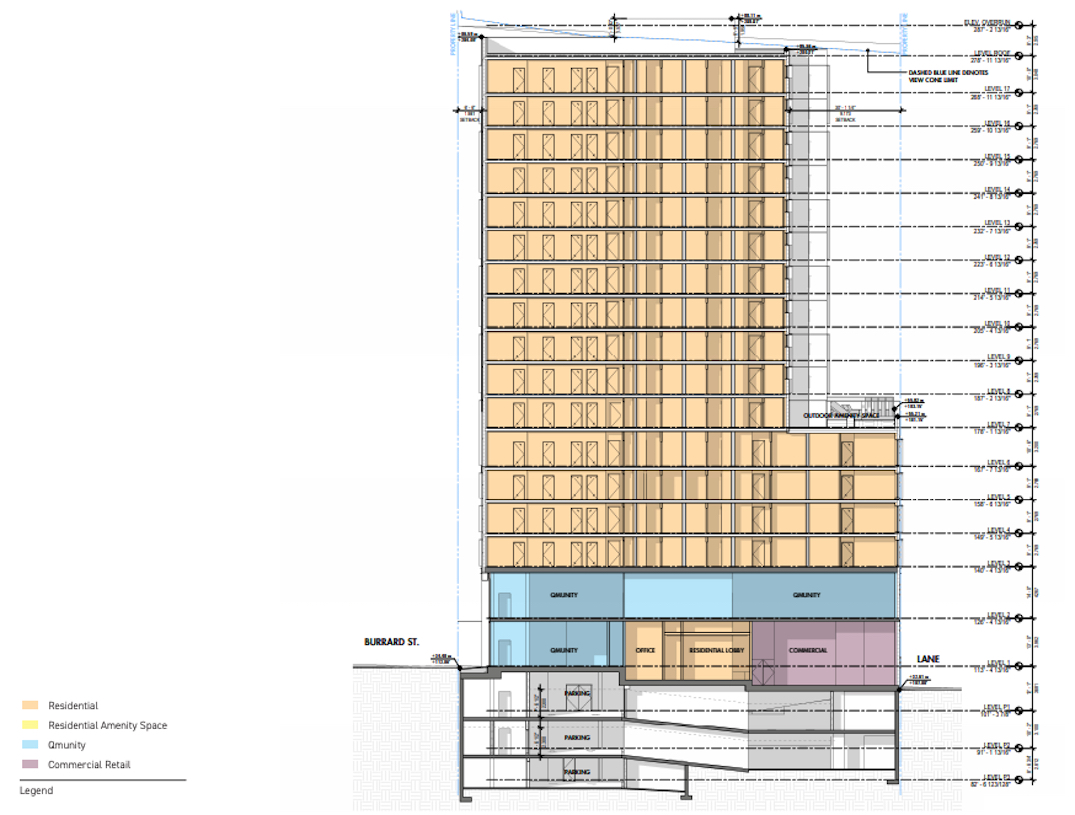 During the public hearing, the proponents told city council this was a “complex site” to work with given its small lot size of just 13,500 sq ft. An effort was made to maximize the development potential of the site.

This is further compounded by the challenges of the view cone height restrictions crossing above the property, specifically View Cone B1 from the Charleston Seawall in South False Creek and View Cone C1 from the Laurel Landbridge in the Fairview Slopes. Both protect the view of the Lions mountain peaks.

The view cones limit the site to a height of about 171.3 ft. The tower’s height will be 178.2 ft, with an extra 6.9 ft permitted to intrude into the view cones for an elevator overrun and machine room.

The tower’s total floor area is 123,000 sq ft for a floor area ratio density of a floor area that is 9.1 times larger than the size of the lot.

The same view cones directly impacted the buildable potential of a 39-storey social housing tower, located nearby at the southwest corner of the intersection of Richards and Drake streets. Not only is the height of the Islamili Community Centre’s social housing tower impacted, but the form of the building is triangular in shape instead of rectangular for more floor area. City council approved this project at 508 Drake Street and 1317 Richards Street last month. 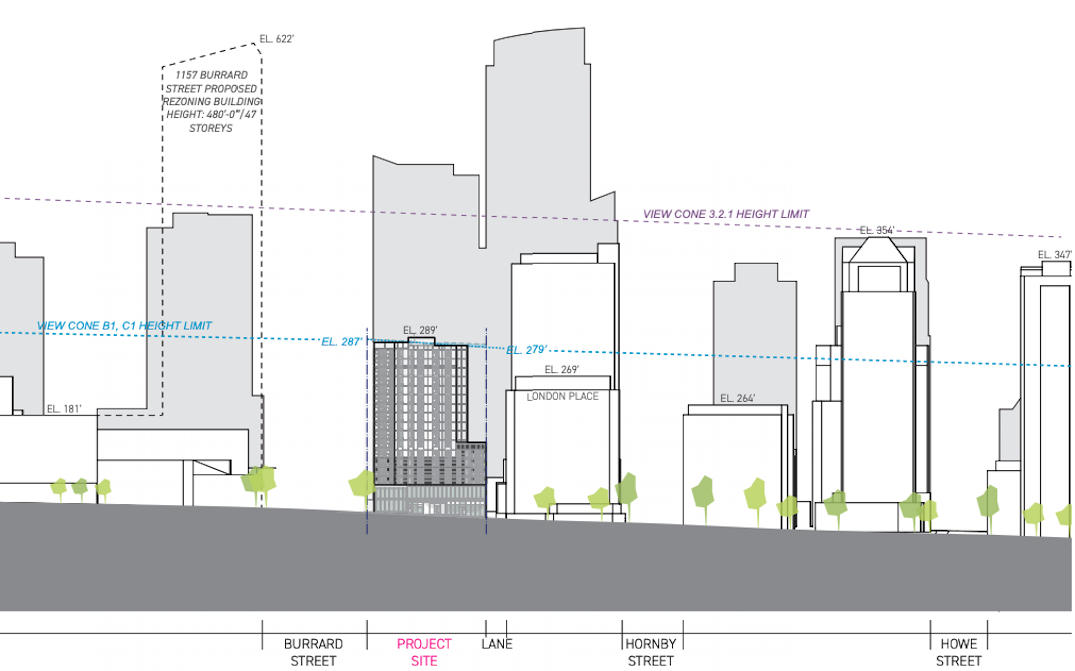 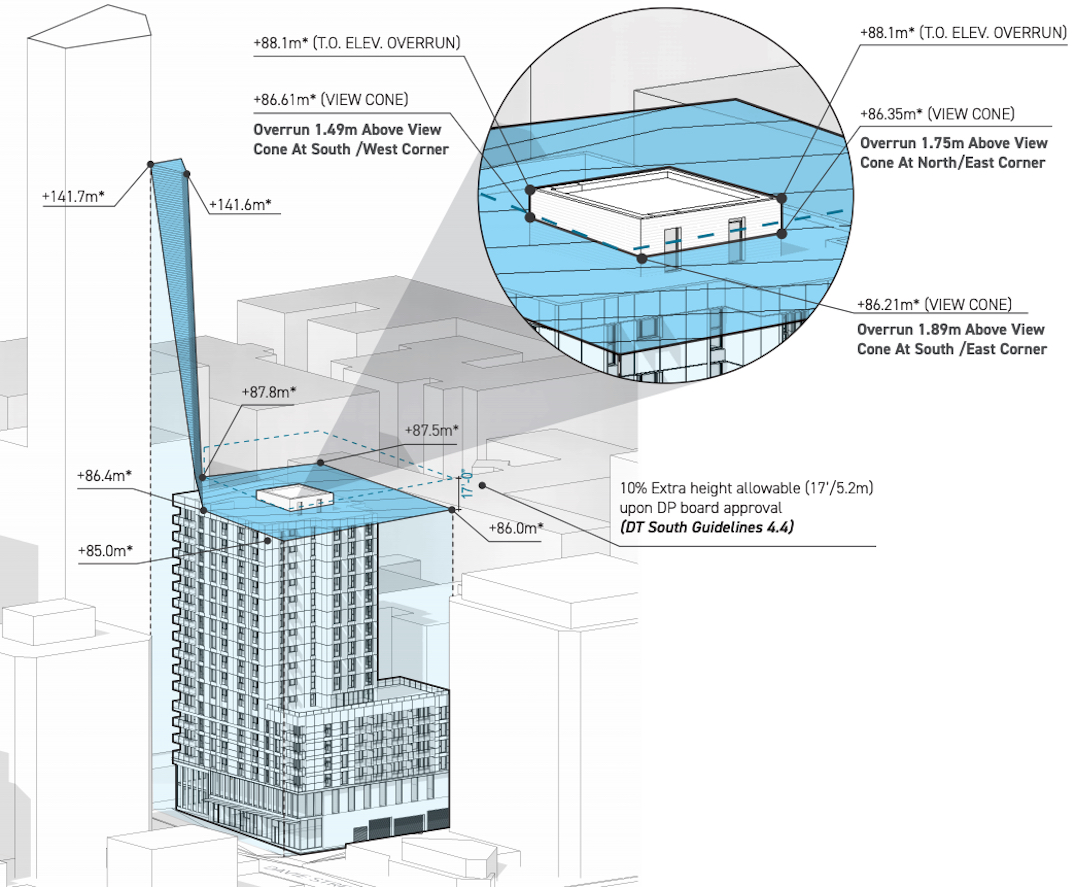 View Cone B1 (left) from the Charleston Seawall in South False Creek and View Cone C1 (right) from the Laurel Landbridge in the Fairview Slopes. Both view cones protect views of the Lions mountains. (City of Vancouver)

There were no votes in opposition during city council’s decision on the project, but NPA councillor Melissa De Genova was absent, and independent councillor Colleen Hardwick abstained.

In explaining her decision to abstain, Hardwick said she believes this is an “excellent project,” but disliked how the project’s rationale is based on the city’s 10-year Housing Vancouver targets of creating additional housing across a spectrum of tenure types. She has a longstanding belief that the targets are based on false assumptions on population growth and housing demand.

“As long as we recognize that this is meeting the need, we can debate over the merits of the housing policies and projections, but I think it’s pretty clear that we do have people who are in desperate need of deeply affordable housing for families, and queer-safe spaces,” said Green Party Pete Fry in response, adding that “this is long, long overdue.”

“We can debate the metrics of housing projections, but there’s no debating that this is a much-needed facility for housing in Vancouver.” 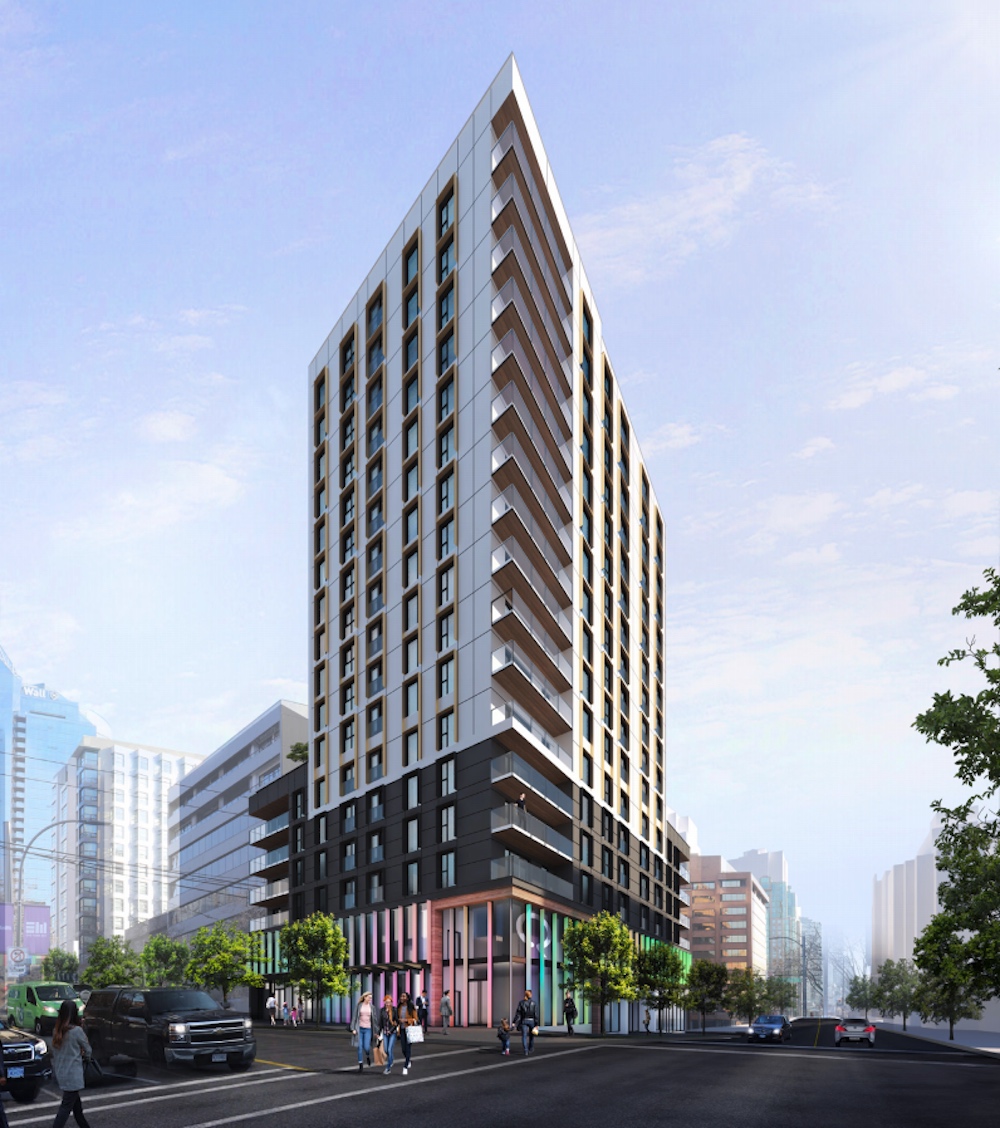 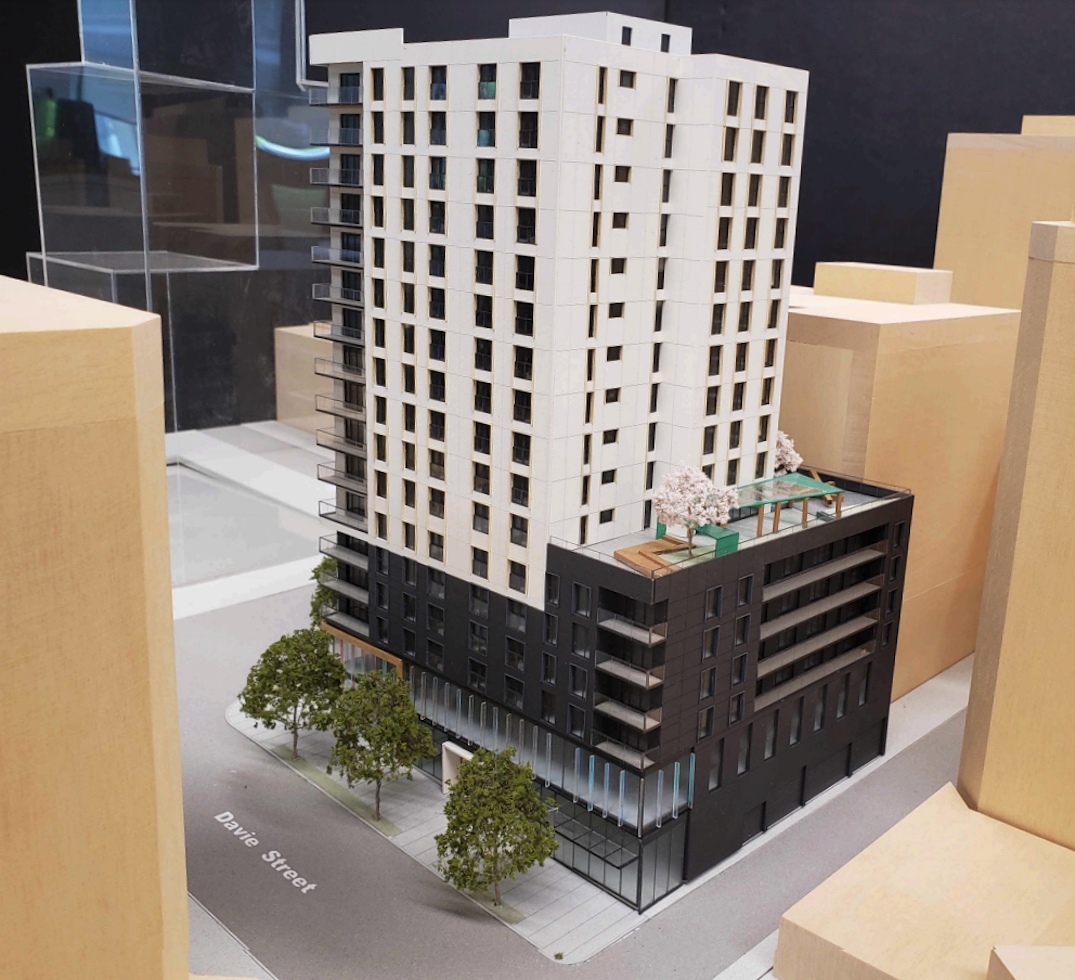