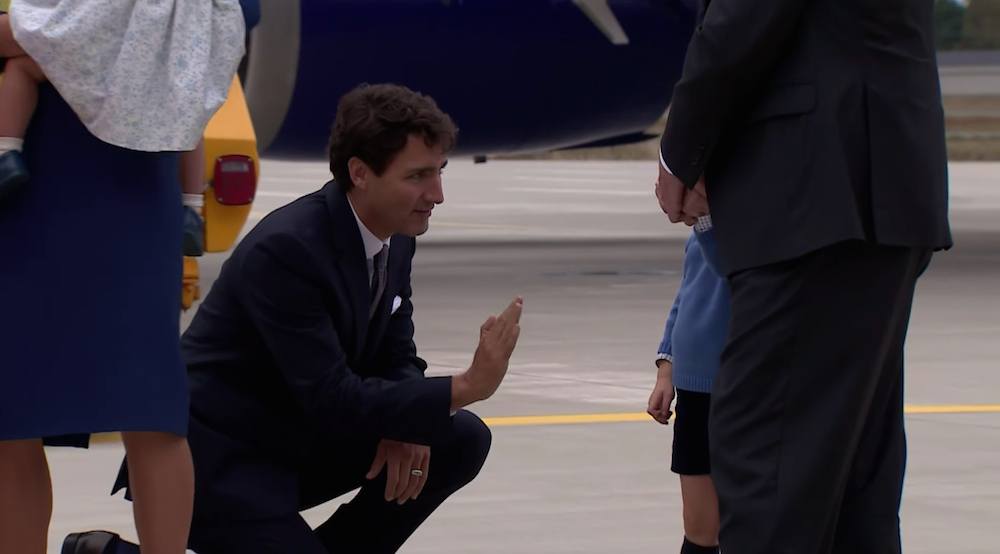 While Canada’s dreamboat Prime Minister Justin Trudeau has no shortage of admirers, at least one young member of the British Royal Family is not convinced.

Three-year-old Prince George arrived at Victoria International Airport yesterday with his father and mother, the Duke and Duchess of Cambridge, and one-year-old sister to start an eight-day Royal Visit of Canada.

Following customary tradition, the nation’s most powerful leaders were on the tarmac to greet the Royal family. They were welcomed by Governor-General David Johnston and his wife Sharon, BC Premier Christy Clark and her son Hamish, and Trudeau and his wife Sophie Gregoire.

George was following his father’s queues, but when it came to meeting Canada’s top leader he wasn’t really into it. Trudeau tried to get George to do a high five, then a handshake, but the toddler shook his head and refused.

It was the cute snub seen around the world, and it isn’t the youngster’s first. In 2014, his parents brought him to a zoo in Sydney where he threw a animal plushie, a gift from zoo staff, onto the ground.

William and Kate attended an official welcoming ceremony attended by tens of thousand of people in front of the BC Legislature at Victoria Inner Harbour shortly after their arrival yesterday.

They flew in a float plane to Coal Harbour in downtown Vancouver this morning and were greeted by thousands of well-wishers at Jack Poole Plaza. Throughout the day they made stops at TELUS Garden, Downtown Eastside’s Sheway outreach centre for pregnant women and new mothers who struggle with mental health and drug addiction, and the reopened Canadian Coast Guard Base in Kitsilano. The couple will be returning to Victoria’s Government House this evening by float plane.

William and Kate’s eight-day Royal Visit, their second to Canada since being married, will take them across British Columbia and the Yukon.