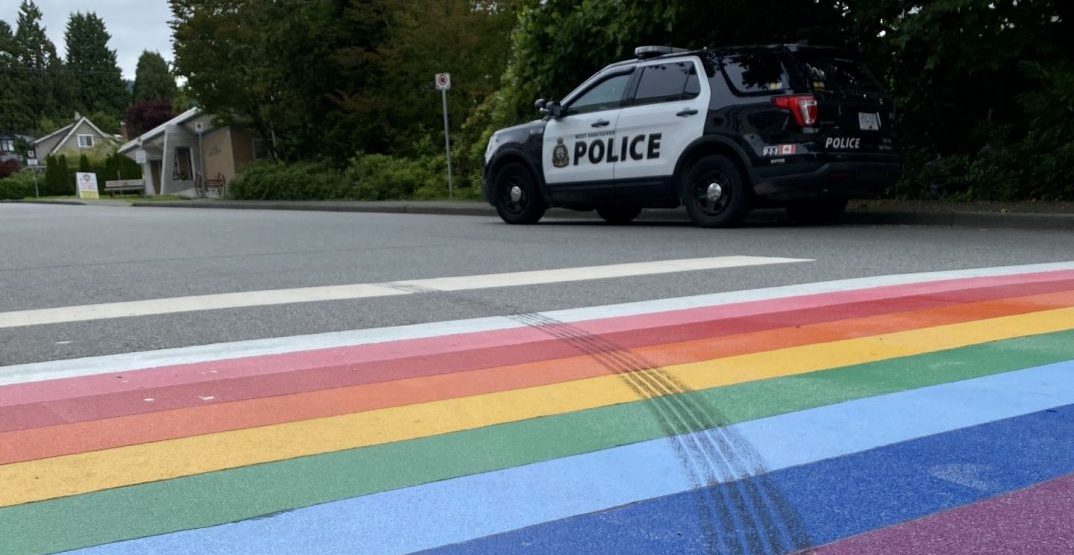 The West Vancouver Police are investigating after they say a vehicle left tire marks along a new Pride crosswalk outside their station.

According to police, on July 7, at 4:04 pm staff inside the police station heard a “loud and sustained tire squealing outside.” Upon further inspection, they found that someone had just left tire marks across a portion of the crosswalk, at the intersection of 16th Street and Esquimalt Avenue.

The suspect vehicle left the area at a high rate of speed and was not located. Police say they are investigating the incident as a count of mischief to property.

“This is very upsetting,” Cst. Kevin Goodmurphy said in a statement. “For whatever reason, this person has chosen to leave a gesture of hate on a crosswalk that stands for the exact opposite.”

The suspect vehicle was captured on CCTV footage and police have identified it as a black 1999-2004 Ford Mustang with red racing stripes along the top and sides, and a rear spoiler and hood scoop.

Investigators would like to speak with the driver responsible for defacing a recently installed Pride crosswalk at 16th St. and Esquimalt Ave. If you have information, please call 604-925-7300. https://t.co/ywkNR4DMAv pic.twitter.com/ViW0ZxcxYN

There appear to be two occupants in the vehicle, police added.

“We have had nothing but support from community members following the installation of the crosswalk, and we know that those people represent the majority,” says Goodmurphy.