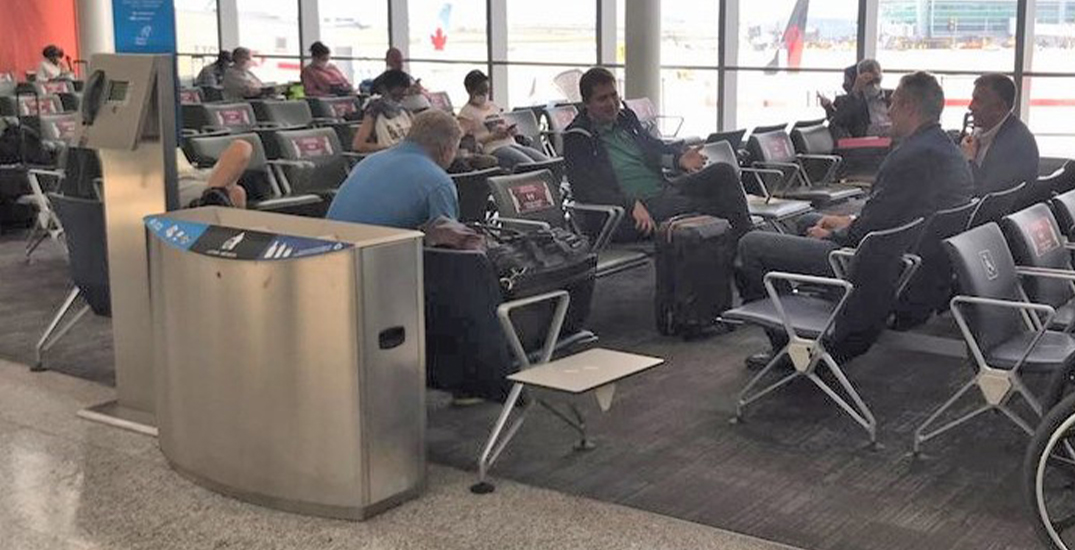 Although the two are not sitting directly adjacent, the photos show them violating the mandatory mask rules that the airport has implemented.

The Conservative Party’s Acting Director of Communications told Daily Hive that Sheer wore a mask while travelling to Ottawa yesterday.

“He removed it to make a phone call. The pictures must have been taken before he put it back on.”

The photographs online do not show Scheer on the phone.

Friend just sent me this picture of Scheer at Pearson. Everyone else in the photo is wearing masks except him and his cronies. WTF. pic.twitter.com/D3SyEiJXcI

When asked about the situation today in a press conference, Scheer answered by referring to an investigation into Prime Minister Justin Trudeau and WE Charity.

“It’s hard to believe this is actually your question and your follow-up when we’re dealing with a prime minister that is under an investigation for an ethics violation for the third time,” he said.

“We’re dealing with $300 billion worth of deficit, with no recovery plan, with no budget. I think the picture is self-explanatory.”

Pearson Airport also spoke on the matter by saying that everyone has a role to play in maintaining their “#HealthyAirport.”

“We understand there may be a need to briefly eat or drink, but we expect all passengers and workers to follow the rules.”

Everyone has a role to play in maintaining our #HealthyAirport. We understand there may be a need to briefly eat or drink, but we expect all passengers and workers to follow the rules.https://t.co/hVB9eYgAI4

Daily Hive has reached out to Premier Brian Pallister for a comment but did not hear back.

The photos surfaced as the City of Toronto made wearing face masks mandatory inside of all enclosed public places on Tuesday, July 7.