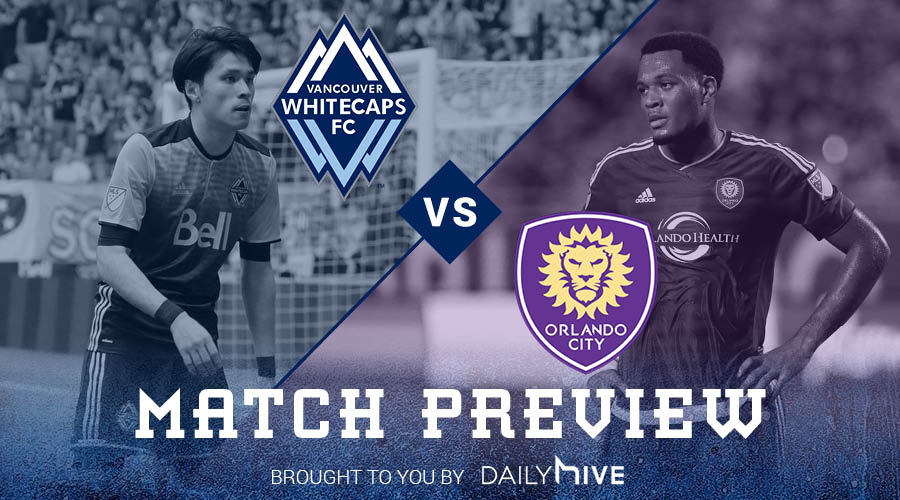 The rapid-fire home stand continues for Vancouver Whitecaps FC this weekend against Eastern Conference strugglers Orlando City SC. If you were hoping to see Brazilian superstar Kaká, prepare to be disappointed. It’s likely the midfield ace will be out with an ongoing groin injury.

Not like it matters, though. You’re coming to BC Place to see the Whitecaps, right? Right!

The world is not ending

Speaking of silly thoughts, how about that “we’re doomed” mentality some people (cough me) have around the team? Four points out of six after two of three home games is not too shabby.

Granted, we’d prefer six of six. Let’s not dwell on that.

I certainly haven’t obsessed over that last-gasp 2-2 draw against the Colorado Rapids. Or who’s going to fill the void left by former striker Octavio Rivero. Nope.

My point is, with a positive result on Saturday, the ‘Caps will have taken seven of nine points on offer, which is near-mandatory in the exhausting Western Conference. Taking full advantage of home games is crucial, especially with the road trips away from Upper Cascadia being so draining.

Heck, the next road trip is a Texas two-step against FC Dallas and the Houston Dynamo. Mmm, Texas in July! Surely that won’t cause us our Pacific northwest warriors any consternation – wait, what? The forecast is for 37C sun with a chance of thunderstorms?! What kind of person chooses to live in that madness?

Vancouver needs three points on Saturday, please and thank you. After that, the ‘Caps can phone it in and bank draws on the road in the blistering heat. All that matters is a win here and now against Orlando.

Kick ’em when they’re down

It’s not like you’ll get a better chance to beat up on the Lions, either. As I mentioned off the top, no Kaká. Winger-turned-fullback Brek Shea (perennial candidate for the All-Name Team) is also a no-go, having been suspended for yellow card accumulation. That’s two of three key cogs down and out with only one true threat remaining.

Problem is, that one threat is Cyle Larin.

The Canadian national team striker of the future (no pressure) and reigning Rookie of the Year has done his darnedest to drag Orlando along this season, contributing eight goals to the cause so far. He hasn’t scored in the last three matches, so he’s due.

In theory, no Kaká means no service, Kevin Molino’s efforts notwithstanding. In practice, Larin has done some amazing things when putting the team on his back. Given half an inch, he can do things like this:

Larin simply cannot be allowed to have free reign along the Vancouver back line. Either Matiás Laba has to go full destroyer and mark Larin out of existence or Kendall Waston has to somehow keep himself out of card trouble while not granting Larin a centimetre of space to crack off a shot.

“With new players coming in, it does provide required competition. That’s part and parcel of football. That’s why we want to bring in players so that we do have that competition. It makes everyone step up their levels.”

-Assistant coach Gordon Forrest, when asked if there was any correlation between David Edgar and Marcel de Jong’s arrival and Vancouver earning their first clean sheet since April 23rd.

“Salt Lake comes to town; a lot of the time, they don’t bring everyone. I feel like that was kind of a tough game. They’ve done well doing that. Orlando, depending on who they bring, who they don’t bring, we’ll be prepared and ready for whatever they throw out.”

-Defender Jordan Harvey, on whether the Orlando match is a “trap game”, referring to the trend of RSL “B” teams getting results in Vancouver.

We think we may have found some doppelgängers in the @WhitecapsFC squad. #VANvORL pic.twitter.com/LEaCJkGMNo

It’s been suggested to me that Orlando City SC’s supporters are the Timbers Army of the Eastern Conference, so to speak. In that case, I offer the following response to their club’s pathetic attempt at trolling:

Your team is horrible, your franchise is a sham and your misery is entirely deserved after what you did to our ‘Caps On Tour supporters.

I await your reasoned and intellectual responses once you finish mouthing out the word “intellectual”.