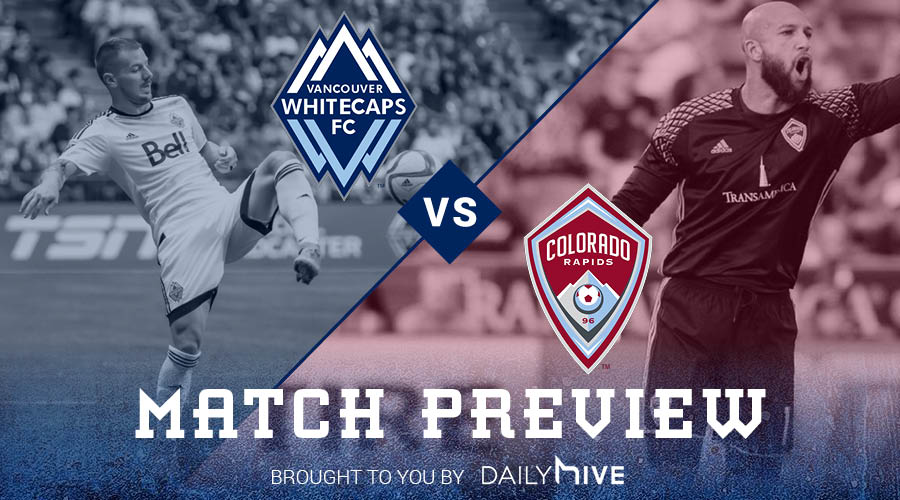 It’s been a tough couple of weeks for the Vancouver Whitecaps (7W-8L-3D, 24 pts – 6th Western Conference), who have won only one match out of their last five MLS matches. The task doesn’t get any easier when they play host to the high-flying Colorado Rapids (9W-2L-6D, 33 pts – 2nd Western Conference) on Saturday night.

“We just need to clean it up”

There aren’t many players in the Whitecaps squad who are as experienced as defender Jordan Harvey. The Whitecaps have been inconsistent through the first half of the season, but still occupy the 6th, and final, playoff berth in the Western Conference.

“We just need to clean it up. Honestly, this team can go so far. We can go to MLS Cup, we just need to clean up those key mistakes in very important moments in the game,” Harvey said recently. “We’re a good team. No one in that locker room is thinking we’re a bad team.”

Harvey’s statement more or less sums up the first 18 games of the season for the Whitecaps. There have been raised expectations that the Whitecaps would build on the success of 2015, when they finished 2nd in the Western Conference and hosted their first ever home playoff match at BC Place.

This year the ‘Caps have been plagued by a frustrating combination of injuries, suspensions, international call-ups and key players suffering from a lack of form. There is no doubt that when this team is firing on all cylinders they’re a match for any team in MLS. The problems for the Whitecaps have been largely self-inflicted, but the good news is they still have 16 games left to figure it out.

Can we have some more (goals), please?

Earlier this week the Whitecaps announced the transfer of Octavio Rivero to Chilean club Colo Colo. Rivero, who struggled to find the back of the net last season, was recently enjoying a return to goal scoring form. While rumours of Rivero’s pending transfer made the rounds, the Uruguayan was a healthy scratch for the Whitecaps’ last several games.

Rivero’s departure now raises some interesting questions for the Whitecaps. The summer transfer window is now open for the next several weeks, so will the ‘Caps pull the trigger and bring in a replacement for Rivero, or will they try and make do with the players they already have?

With Rivero no longer on the team, the Whitecaps have the dual luxury of freeing up both his salary and designated player spot on the roster. Other than the now dismissed rumour of Mexican forward Enrique Esqueda joining the club, there have been no other players linked with the Whitecaps.

This doesn’t mean that the ‘Caps aren’t actively seeking a replacement for Rivero, but if they are they only have until the beginning of August to get a deal done.

The second half of the season starts now

While the Whitecaps’ inconsistent form has been a concern in the past few months, there is still plenty of time to play to the level that they are capable of and finish the year on a high note.

Does this mean that the Whitecaps have what it takes to reach MLS Cup this year? Not necessarily, but the LA Galaxy, for example, have proven many times over the years that it’s not how you start the year in MLS, but how you finish. The Galaxy have been notorious slow starters in recent years, but have still managed to dominate MLS and have 5 MLS Cups to prove it.

Turning things around and getting the season back on track for the Whitecaps is paramount for the Whitecaps, and the task doesn’t get any easier with the visit of the Colorado Rapids this weekend. The Rapids currently sit 2nd in the Western Conference and have not lost a match since April 9th when they lost 1-0 to Real Salt Lake.

It has definitely been a tough couple of weeks for the Whitecaps and their fans, and a win over the Rapids would go a long way to getting their season back on track.