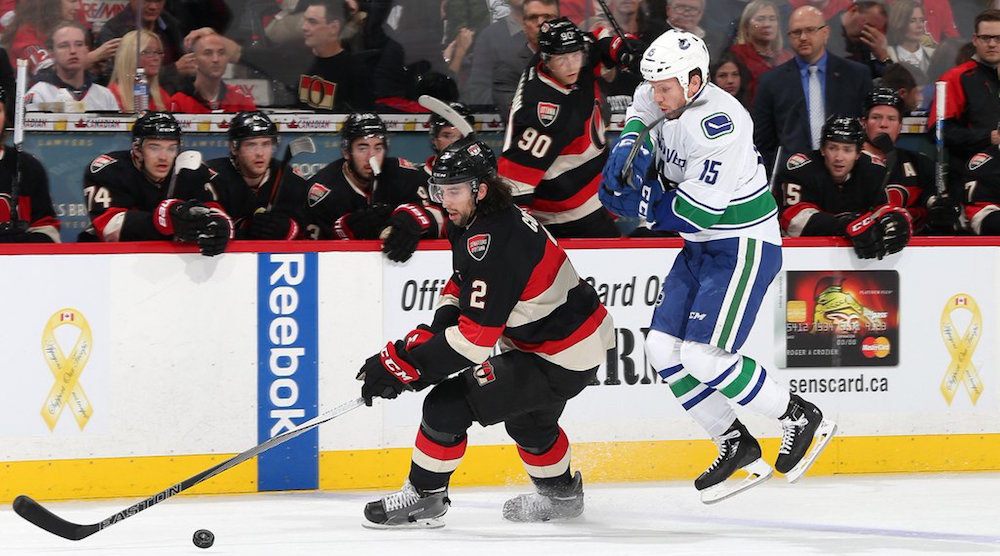 The Vancouver Canucks’ six-game road trip continues tonight as they take on Craig Anderson and the Senators, trying to avoid a seventh straight loss.

The Canucks come into this game having been shut-out in three of their past four games, including last night’s 3-0 loss to Montreal.

With the Canucks in the second game of a back-to-back set, there could be some changes to the lineup against the Sens. Vancouver held an optional skate Thursday morning, so we’ll have to wait until the pre-game warmup for any changes.

Chris Tanev, who is playing hurt, could come out of the lineup. If he does, Nikita Tryamkin is a candidate to insert into the lineup for the first time this season.

One change we do know is that Jacob Markstrom will start in goal.

UPDATE: Chris Tanev is out of the line-up tonight.

Hearing Chris Tanev is out tonight in Ottawa. #Canucks

1. You guessed it, Canucks can’t score!

Okay, so you knew that the Canucks had troubles scoring goals, but it’s been bad even by their standards lately. They have been shut-out in three of their last four games with just two goals in that span. That’s a 75% shutout rate.

To their credit, they put forth a solid effort last night, peppering Carey Price with 42 shots while allowing the Canadiens just 22. They do need to start finishing their chances, but facing someone other than the best goalie in the league would certainly help.

The Sedin twins had about as dangerous a game as you can have without hitting the scoresheet, combining for five shots and some quality chances on Price, particularly early in the game.

"We played well tonight, but if we can't score, we can't win. Our line has to step up, the PP has to be better, everything." – H. Sedin

Hopefully they can keep building on that momentum, because the Canucks really need the Sedins to put up points almost every night if they want to start stringing wins together.

The Canucks will see Mike Condon in goal tonight, who the Sens acquired for a fifth-round draft pick from the Pittsburgh Penguins yesterday.

The coach confirms that Mike Condon will start in goal tonight for the #Sens against Vancouver. pic.twitter.com/HaBJOa7POK

Condon has appeared in just a single period with the Pens this year, so he could be rusty. He played in 55 games with Montreal last season after Carey Price went down with an injury. He finished the season with a 21-25-3 record, .903 save percentage, and a 2.71 goals against average.

This is the fifth-time in 11 games that the Canucks have not had to face a team’s starting goaltender.

Chris Driedger will back-up Condon, as Craig Anderson has left the team for the second time in the last week to be with his wife Nicholle, who was recently diagnosed with cancer.

Anderson helped the Sens to a 3-0 win over the Canucks nine days ago, and stopped 69 of 70 shots since, including an emotional 37-save shutout against the Oilers in the first game since the devastating news.

The Canucks coaching and management have been steadfast in saying players need to earn their spot on the roster. It was why they waived Emerson Etem and signed Jack Skille, right?

However, that idea seemingly does not apply to Philip Larsen. The Canucks d-man acquired last spring has been given ample time to show what he can do, and well, he hasn’t shown much.

Sure, he leads all Canucks defencemen in points with three (all assists) in ten games, but does that really say much? Erik Gudbranson has two assists, and he hasn’t been getting any power play time, let alone first unit with Henrik and Daniel.

Larsen was brought in to quarterback the Canucks power play this season. Yes, the same power play that is currently second-last in the NHL at a dismal 9.1%.

Sure, you can’t pin that all on Larsen, but you certainly can’t use it as a reason to keep him in the lineup either.

Not only has Larsen not looked that impressive offensively, but he has been subpar defensively as well, and his plus/minus rating of -9 is the worst on the team. That took another hit after being on for a pair of goals against Montreal yesterday, including this one, where he wasn’t able to take away the cross-crease pass.

Torrey Mitchell scores to put the #Habs up 2-0 #Canucks pic.twitter.com/Toxb0D7TXb

Keeping Larsen in the lineup every night might make sense if the Canucks didn’t have any other options, but they do.

In fact, they just sent a similar player who was outperforming him, Troy Stecher, back to the Utica Comets. Stecher looked more effective than Larsen on both sides of the puck during his three-game stint.

The Canucks also have two defencemen on their roster ready to play in Alex Biega and, of course, Nikita Tryamkin. Remember him?

Tryamkin hasn’t seen a single minute of NHL action this season, while Biega got into one game – as a forward. Maybe it’s time to give one of them a look.

The Canucks can’t possibly get shut-out for the fourth time in five games, can they?

Probably not, and Mike Condon is exactly what the doctor ordered.

If the Canucks play like they did last night – a big ask – they will win. They’ll come close to that level tonight and Loui Eriksson will finally get some puck luck, scoring the winner in a 3-2 game.