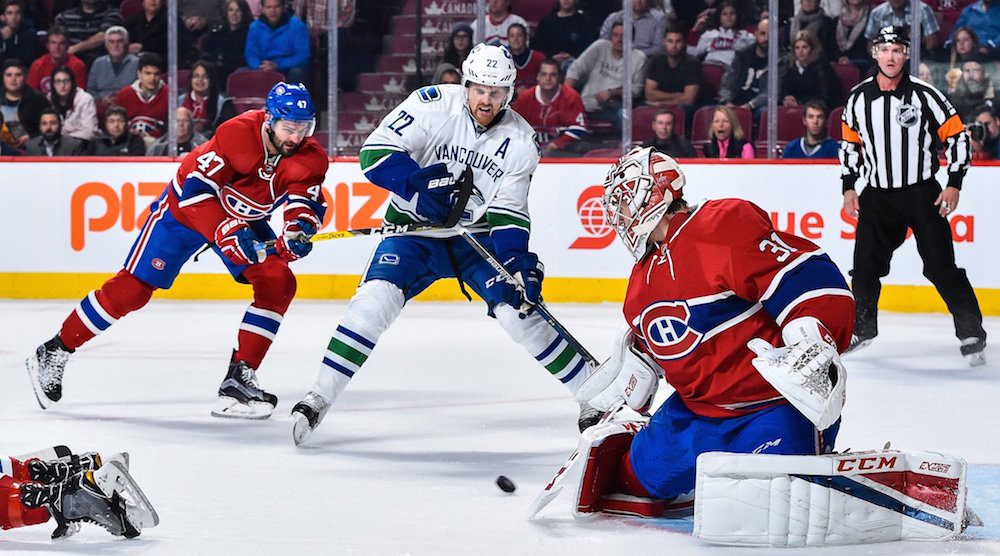 First, the good news: the Canucks didn’t lose because of a lack of effort.

They didn’t lose because of bad coaching.

And they didn’t look lazy.

No Canuck had a negative shot attempt (corsi) differential, and only one Canadien had a positive differential.

All this means Vancouver dominated the ice.

And one more positive: they’re hanging onto that playoff spot (by one point).

The bad news: they lost 3-0 on Wednesday – their sixth loss in a row and the third time they’ve been shutout in their past four games.

How? Let’s start with a throwback to the SixPack headline on last year’s win over the Habs at this point of the season: SixPack – Habs’ streak broken; Price can’t stop McCann.

That day, Vancouver stopped the Habs from going 10-0-0 and Jared McCann had fans hopeful for a huge future, as he scored two goals in a 5-1 win.

But let’s get back to the positives.

This probably won’t make you feel any better about the team right now, but Burrows is right here.

“We really wanted to test Carey and we did. Our process was good and if we keep playing this way, the wins will come.” – Burrows

Oh, plus we got this gif out of the game.

The Canucks had so many chances.

There were Hansen’s breakaway and Horvat’s rush in the first period.

There was this glorious pass from Daniel Sedin to Alex Edler on a second period power play.

Great adjustment by Edler after Emelin tipped the pass, btw. If it’s not tipped, that’s probably a goal.

And there was this Eriksson chance.

If you’re going to score 0 goals, you’re not leaving much room for mistakes.

Montreal’s first goal was a bit of a mistake by Erik Gudbranson. Nathan Beaulieu was his man to box out here, and he didn’t exactly box him out.

At the end of the second period, Montreal struck again with Ben Hutton caught up ice. While you don’t expect Daniel Sedin to look like a top-4 defenceman, you also hope he doesn’t make a guy named Philip Danault look like Connor McDavid.

(He did – he’s the one who makes the pass here)

Nah. Too much offence. Not enough two-way hockey.

What about Troy Stecher?

4A. Fans not happy with Stecher news

There was no doubt on who had been Vancouver’s best defenceman the three games prior to this one.

He was the best player offensively, he’d been good defensively (impressive, considering his size), and he was a positive for fans in three otherwise negative games.

The sample size is miniscule, but Stecher has led Canucks defencemen in possession and shot attempts stats despite being rolled out in mostly defensive situations. And he played the second-highest ice time, with only the team’s number one defenceman – Alex Edler – ahead of him.

So when the Canucks made this announcement, there was predictable outrage.

Here are a couple of replies to that tweet, and these are by far the tamest ones.

@Canucks So the Canucks just assigned the BEST dman on the team? yeah this year is really all about winning.

@Canucks @UticaComets it’s hard being a fan of this team

I asked my followers how they felt.

@omarcanuck not to be dramatic but it’s getting harder for me to watch and get into games bc of stupid shit like this.

@omarcanuck what else does that guy have to do to work his way into the line up?

Most reacted that way, but there were some level headed responses. Actually, just one.

@omarcanuck it’s not like they’re sending him to junior. He may only be down a few games

Now, I’m not sure if this is what’s going on, but it’s a funny visual either way.

4B. Why send Stecher down?

Here’s a quick rundown of other Canucks defencemen you’d like to see sent to Utica (or anywhere really) instead of Stecher, and why they’re going nowhere.

Tryamkin: He has a stipulation in his contract that says he won’t go to Utica. Why? Who knows. Tight seats on bus rides? Doesn’t like the east coast? Has an angry ex he wants to stay away from? Your guess is as good as mine.

Biega & Sbisa: The Canucks are taking the expansion draft seriously. Next summer, they’ll have to expose a defenceman and they don’t want it to be one of their key players.

Here are the requirements for that defenceman, as written on Daily Hive by Rob Williams:

Biega is 18 games away and Sbisa is 20 games away. If you’re wondering why they need both, most believe it’s to guard against an injury to one.

Larsen: While he’s the leading candidate to make way for Stecher, Vancouver’s probably not ready to give up on him yet. After pulling him out of the KHL and promising an offensive role (and lots of power play time), he may not even accept going to the AHL, and may go straight back to Russia without looking back.

You don’t have to be a genius to know the Canucks are having trouble producing offence this season.

What’s more concerning is they’re not snake bitten, they’re not getting chances and missing – they’re just not producing chances, period.

Here’s a chart ranking NHL teams’ even strength shot attempts from lowest to highest (prior to Wednesday). 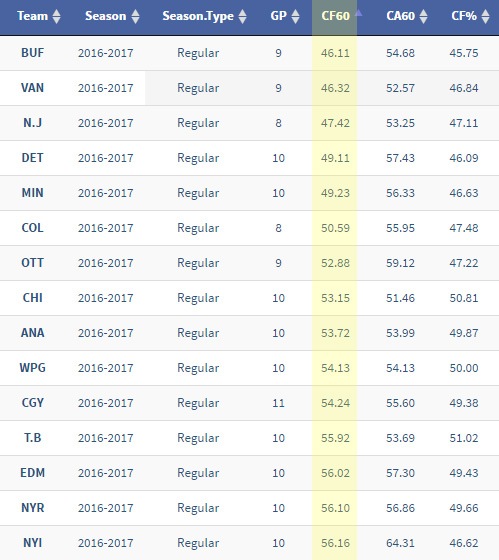 Speaking with the media after the morning skate Wednesday, Willie Desjardins talked about how the team can produce more offence.

“We’ve gotta get more pucks to the net for sure,” he said. “We’ve looked at that and maybe getting our D involved a little more.”

Getting the defence involved would be a good start. Looking at possession stats, Troy Stecher is far and away Vancouver’s best defenceman in terms of driving offence, so his coming out of the lineup for Chris Tanev’s return doesn’t help.

Jake Virtanen looked dangerous a couple of times in the first. This was his best chance.

But by the end of the game, he played the least of any Canucks player, at just over seven minutes.

There was the predictable outrage from fans, but here’s the thing – look at what Willie said when explaining Virtanen’s lack of playing time last week:

“It’s not that I don’t think Jake has the talent to do it, I just don’t think he’s quite in the spot he needs to be to get there yet.”

And on if he thinks Virtanen should be sent to Utica:

“I think it depends on Jake and what he’s doing and where he’s at, and if he’s not pushing himself here, then maybe he does have to get ice time someplace else.”

And he’s still not playing much. Why? Fitness issues.

Just saw Jake Virtanen in Sportchek and Danica’s comment was “Are you sure? He looks chunky…”

Note: Thanks to Ryan Biech for his help with some of the gifs in the SixPack