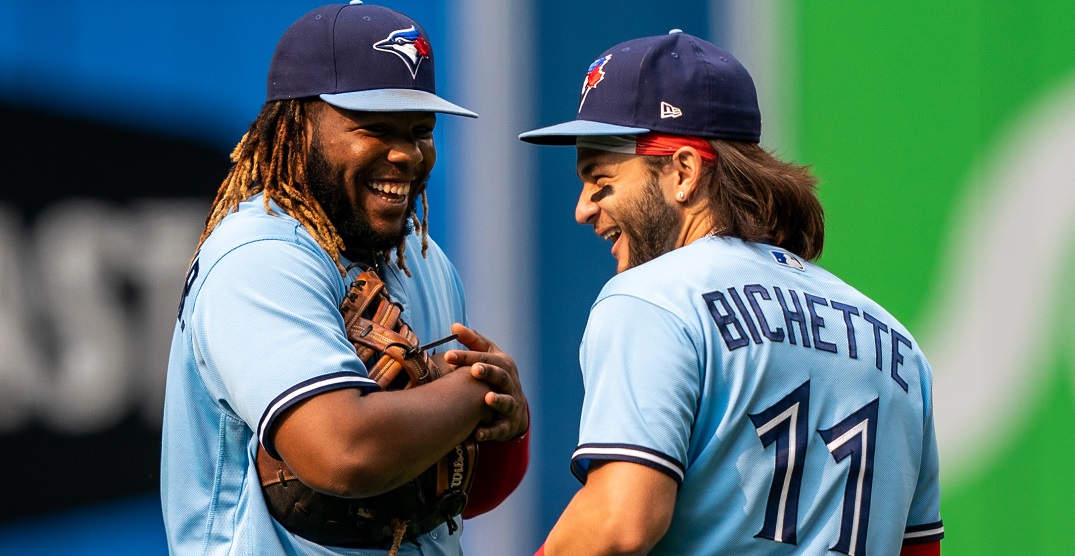 In some ways, it feels like the 2021 season just ended for the Toronto Blue Jays (albeit, too soon), but many are already looking ahead into the 2022 campaign and the groundwork which needs to be laid this winter.

Despite the potential of losing players like Robbie Ray and Marcus Semien to free agency, the Blue Jays still possess the nucleus of a playoff calibre team. But they still have work to do if they want to eclipse the 91-win threshold they set in 2021.

With the offseason on the horizon after the World Series, there are four immediate questions facing the Blue Jays regarding qualifying offers, free agency, and contract extensions for their young stars.

MLB’s qualifying offer deadline is November 10, and this year the official QO total is $18.4 million. Robbie Ray and Marcus Semien will receive offers from the Blue Jays and will certainly decline them and enter free agency. But Steven Matz is a curious case.

As one of the Blue Jays’ under-the-radar moves heading into the 2021 campaign, Matz bounced back and posted solid numbers for Toronto. With a 3.82 ERA and 29 starts, the left-hander had one of the best seasons of his career as he enters free agency for the first time.

According to FanGraphs’ value metric, Matz was worth $22.1 million in 2021, despite only making $5.2 million. But is he worth the $18.4 million qualifying offer and are the Blue Jays banking on another solid performance in 2022?

It’s an expensive gamble for the Blue Jays to take, as Matz would surely accept the qualifying offer if given, so it’s probably not worth playing a game of QO chicken. As a compromise, the Blue Jays could offer Matz a two-year deal in the neighbourhood of $20-22 million.

That would provide some starting pitching insurance and help add to Toronto’s starting pitcher depth, which is lacking at the moment. A qualifying offer is highly unlikely for Matz, but exploring a multi-year deal to retain him would be a wise choice for the Jays.

Ah yes, one of the offseason’s most exciting events; the Rule-5 draft! Occasionally, the Blue Jays have found diamonds in the rough in the Rule-5 draft (Joe Biagini, George Bell), but for the most part, it protects players from being exposed to other organizations.

This year, the Blue Jays will usher in a new crop of prospects to add to the 40-man, which may push a few incumbents off the roster. Names like Reese McGuire, Trent Thornton, Breyvic Valera, Anthony Castro, and Anthony Kay are all on the bubble.

With four catchers on the 40-man roster already, McGuire is a prime candidate to be taken off the roster. He was designated for assignment earlier in the year, but by the virtue of injuries to Danny Jansen and Alejandro Kirk, McGuire received the lion’s share of catching duties behind the plate in 2021.

And with the Blue Jays’ top prospect Gabriel Moreno making his way up the ranks, McGuire’s days may be numbered as one of the organization’s lower-tier catchers on the depth chart.

Despite a disastrous season in 2021, Trent Thornton is due for a salary bump in arbitration and might make north of $1 million, making him a prime non-tender candidate. Thirty-year-old Breyvic Valera may be left on the outside looking in, as well as Anthony Kay and Anthony Castro.

3. How will the CBA unrest affect free agent deals?

After spending more than $275 million combined over the last two offseasons, the Blue Jays are no stranger to dolling out big money contracts as of late. And with some apparent needs and a wealth of free agents, this is the offseason to triple down on those efforts.

But the looming collective bargaining agreement between MLB’s owners and the Player’s Association is looming large, with the potential of another lockout coming on December 2.

MLB free agency opens up six days after the World Series, which doesn’t leave much time between the end of the 2021 campaign and this CBA deadline. Even if a new deal gets hammered out in time, there are a lot of unknown variables for teams spending hundreds of millions on free agents.

This offseason may play out similarly to what happened during the 2017-18 offseason where the entire market was held up by the uncertainty surrounding the Marlins trading Giancarlo Stanton, and Shohei Ohtani’s potential landing spots.

Vladimir Guerrero Jr., Bo Bichette, and Teoscar Hernandez were integral to the Blue Jays’ success in 2021, and they also figure into the long-term plans of this club. Now that they’re going through salary arbitration, it’s time to approach these players with long-term contract extensions.

There’s no rush to get deals done with any of these players, but Hernandez is two years away from free agency, and Vladdy and Bichette are four years away from hitting the open market. As anyone with kids can attest to, those four years can fly by in a hurry.

With Hernandez, he’s been a consistent player for the Blue Jays dating back to June 2019, so any questions about his legitimacy have been answered. His extension is the most pressing of the three, and should be inked this offseason.

As sons of former MLB players, Guerrero and Bichette have a very keen sense of their worth and won’t leave any money or term on the table. If and when they sign long-term extensions, they’ll be the largest in Blue Jays history.

Earlier this year, Fernando Tatis Jr. inked a 14-year contract extension to establish himself as the face of the franchise for the San Diego Padres. Tatis Jr.’s 14-year, $340 million contract is a decent comparable for Guerrero, but the Blue Jays may want to wait one more year just to be sure Vladdy can duplicate his 2021 numbers into next season.

At 22 and 23 years old, Guerrero and Bichette are poised as franchise figureheads for the Blue Jays, and they should be paid accordingly so. Don’t expect either of them to take anything below market value, even if the deal pays out over 10-plus years.

Long-term extensions for Hernandez, Guerrero, and Bichette aren’t at the forefront of the Blue Jays’ to-do list this offseason, but they’re three separate situations which should be closely monitored by Toronto’s front office.