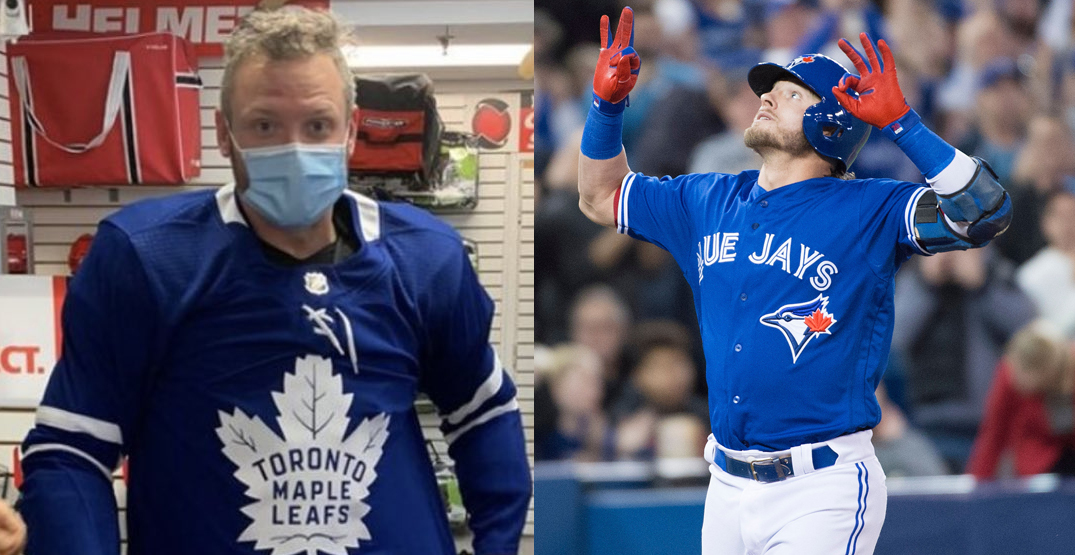 It’s not every day that a former American League MVP waltzes into a sports store and gets fitted with head-to-toe hockey gear. It’s even rarer when he’s three years removed from playing in Toronto, it’s the dead of the MLB offseason, and he’s also a member of the Minnesota Twins.

That’s exactly what happened at All Pro Source for Sports in Newmarket, Ontario, earlier this week when former Blue Jays third baseman Josh Donaldson made an impromptu shopping trip to gear up for some ice time at a local rink.

He even donned a Maple Leafs jersey and quipped on Twitter that he’d be willing to don the blue and white as a two-sport athlete.

Thank you to the @MapleLeafs for giving me the opportunity tonight to start in my first NHL game!! I’ll be the first two way player to play in the MLB and NHL. Momma we made it. pic.twitter.com/AtBkTODzoc

Darren Ertl is the manager at All Pro Source for Sports, which is just north of Toronto. He, along with some fellow employees, thought one of their customers bore resemblance to the “Bringer of Rain.”

With masks in place, it’s often difficult to recognize people, but perhaps sensing the store was catching onto who was lacing up skates, Donaldson’s friend encouraged the former Blue Jay to introduce himself.

“We had a fun time fitting him,” Ertl told Daily Hive. “He’s a really great guy. He’s a really fun guy. We had a lot of laughs. It was a pretty unreal experience.”

Donaldson told the staff he and his friend booked some ice time at a rink, but he had no equipment whatsoever, so he needed everything from head to toe. They spent a few hours in the store, getting fitted for gear to play some pickup hockey.

He clearly has an affinity for Canada’s official winter sport; a few years ago, Donaldson was in the stands in Tampa Bay to catch a Lightning game.

Ertl noted it’s common to see NHL players at his store from time to time, but he’s never had an American League MVP walk through his doors. “He was so energetic and fun,” Ertl said. “He was joking about the whole thing, because he’s never played hockey before.

“When we’re fitting him up, he had the elbow pads on wrong, and his friend’s laughing at him, and (Donaldson) thinks it’s funny. It was a really fun time.”

The store’s assistant manager, Joel, suggested Donaldson throw on a Leafs jersey and post a photo in good fun, and Donaldson happily obliged. Within 30 minutes of the photo going up on All Pro Source for Sports Instagram stories, word travelled like wildfire.

Customers inside the store took photos with Donaldson, and he even signed a few autographs after he finished with his hockey gear fitting. Hours after Donaldson departed, fans flocked the store, hoping to catch a glimpse of the former MVP.

The photo made the rounds through social media, all the way from Sportsnet to ESPN, and Donaldson even reposted to photo to his Twitter feed a few days later. Ertl said he’s still getting calls from friends who heard about how the chance encounter with the veteran third baseman.

Donaldson is three-plus years removed from his time with the Blue Jays, but he’s still very beloved in this city for his link to the 2015 and 2016 playoff teams. Even as a member of the visiting Minnesota Twins this past summer, Blue Jays fans showed their adoration for the three-time All-Star.