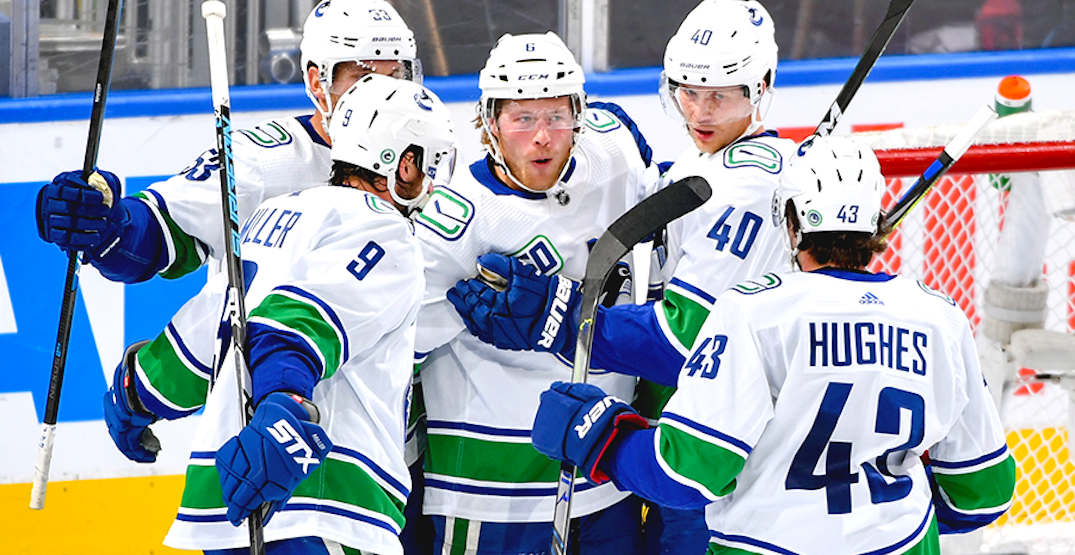 The abnormally-long NHL offseason is finally over, and the Vancouver Canucks are set to drop the puck on the 2020-21 season.

The Canucks enter this new season with big expectations for themselves, having made it one game away from the Western Conference Final last year.

They also come into this season with a lot of new faces. Jacob Markstrom, Chris Tanev, Tyler Toffoli, and Troy Stecher were among the most notable players that found new homes elsewhere, while Nate Schmidt, Braden Holtby, and Travis Hamonic headline the new additions to the team.

Nobody knows what to expect in this pandemic-shortened 56-game season, and with such a high roster turnover and a brand new all-Canadian North Division, there’s no telling how the Canucks will fare.

One thing that does seem clear is who will make the opening night roster, after six more cuts were made on Monday morning.

Here’s one bold prediction for every Canucks player (excluding taxi squad) this season:

After just two goals in 55 games last season, Jay Beagle will score two goals in a single game in 2021, collecting his first multi-goal game as a Canuck and his first since December of 2016.

After only 16 goals last season, Brock Boeser will enjoy his best offensive season yet, scoring 20+ goals and hovering around a point-per-game pace.

While Adam Gaudette has played most of his NHL career at centre, he’ll make the shift to right wing midway into the 2021 season and will end the season playing on Bo Horvat’s wing.

Nils Hoglander will make the team and the 20-year-old rookie will showcase his slick hands by pulling off a Michigan goal in his rookie season.

Hoglander has been giving tips to MacEwen and Virtanen on how to do the Michigan after nearly everyone has left the ice. #Canucks pic.twitter.com/EYL7uZoRAZ

Freed from both the tough matchups and lack of offensive linemates that have hindered him in recent seasons, Bo Horvat will match his point total from last year (53 points) in this 56-game season.

One of the hardest working players on the team, Zack MacEwan will start the season as a healthy scratch but work his way into a regular role on the third line with Gaudette and Antoine Roussel.

J.T. Miller fought Matthew Tkachuk once last season, and with the divisional schedule intensifying rivalries, the two will go for round 2 in the 2021 season.

Tyler Motte’s become a fan favourite for his work ethic and penalty killing abilities, and in the 2021 season he’ll cement that status with an excellent season on the fourth line, earning himself the Canucks “Unsung Hero” award.

After leading the league with six empty netters last season, Tanner Pearson will lose the empty net luck and won’t score on an open cage in the 2021 season.

Elias Pettersson takes another big stride forward in his third NHL season, clicking at over a point-per-game pace while earning Canucks MVP honours and a top five finish in the Hart Trophy voting.

Antoine Roussel’s bread and butter is his agitating style and two-way play, but in the 2021 season he’ll record the second hat-trick of his career in a game against the Ottawa Senators.

Sutter dropped the mitts for the first time as a Canuck last season, and in 2021 he’ll get his first Gordie Howe hat-trick since completing the feat all the way back in 2012 with the Carolina Hurricanes.

With Hoglander and MacEwan finding new roles on the wings, Jake Virtanen will drop down to the fourth line and like many other former Canucks, he’ll be traded to the Florida Panthers.

A left shot defenceman that likes to play the right side, Jordie Benn saw only a handful of games on the right side in the 2019-20 season. That will change, as Benn will play more games on his off-side than not in 2021.

With Tanev no longer around to share the shot blocking spotlight (try saying that 10 times fast), Alex Edler will go full goalie mode and lead the entire NHL in blocked shots in 2021.

A recent addition to the team, 30-year-old Travis Hamonic will prove to be capable of filling the void left by Tanev and will sign an extension with the Canucks next offseason.

Quinn Hughes may have been overshadowed by Cale Makar in their rookie seasons, but in the sophomore campaign it will be Hughes who shines brighter, outpacing Makar in points-per-game and finishing higher on the Norris Trophy voting list.

Plagued by injuries since being drafted sixth overall in 2016, Olli Juolevi will finally enjoy a healthy season, playing in all 56 Canucks games this season.

Playing a reduced role after the addition of Nate Schmidt, Tyler Myers will feast on weaker competition to match his point total from last season (21) despite playing 12 fewer games.

Having been traded for just a third-round pick from Vegas so they could make room for Alex Pietrangelo, Schmidt will stick it to his old team by putting up better offensive numbers than Pietrangelo.

While neither goalie will be able to replicate the incredible season Jacob Markstrom had in 2019-20, Thatcher Demko will make it clear that the team made the right choice by recording a save percentage above .915, outplaying Holtby and earning the starter’s role.

Demko may be the better of the two goalies, but Holtby will have a solid bounce-back season, which will include winning a goaltending duel against Markstrom in which the Canucks beat Calgary by a 1-0 score.