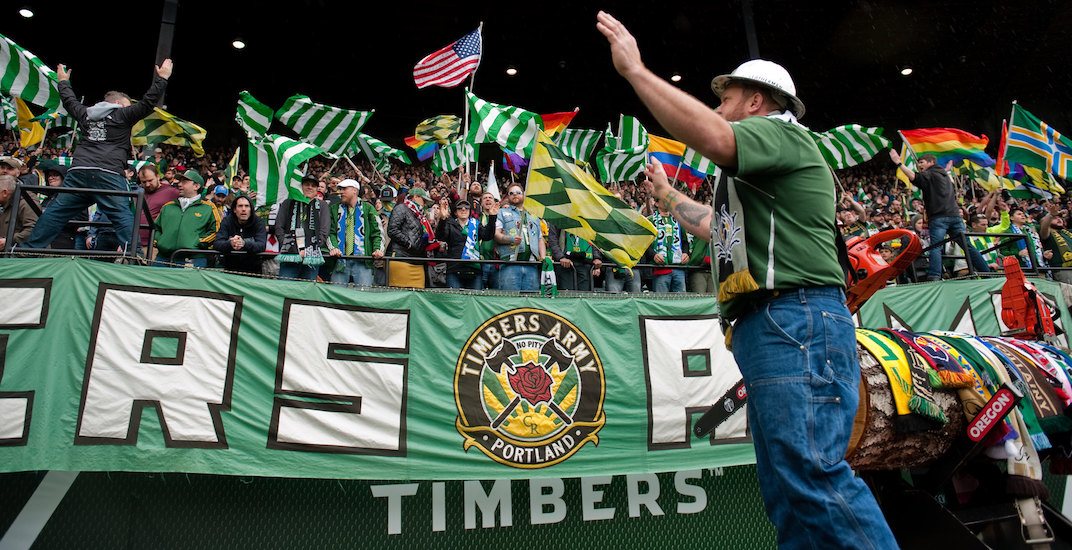 They may cheer for different teams on the pitch, but supporters of the Vancouver Whitecaps and Portland Timbers will be singing the same tune in the stands this week.

The Vancouver Southsiders and Curva Collective will ‘walk-out’ at the 35th minute until half time, just as the supporters groups have done for the past two Whitecaps home matches.

Timbers Army, the largest supporters group of the Portland Timbers, have announced they will be joining the walk-out protest at Friday’s match at BC Place. A Cascadia rival, Timbers fans typically travel to Vancouver in large numbers to see their team play.

“Some things are bigger than rivalry,” Timbers Army announced on their website.

“We support human rights, and we support our Cascadian rivals in their fight for safe environments for athletes. To that end, we are sharing this message from Southsiders and Curva Collective — and we encourage our supporters to participate in the walkout of the stadium at the 35th minute (34:00 on the clock) in solidarity.”

The supporters groups are protesting how the Whitecaps are handling multiple abuse allegations involving a former coach and female players.

Southsiders representatives have been in contact Ciara McCormack, the former player who was the first to shine a light on the subject in a February 25 blog post titled A horrific Canadian soccer story – The story no one wants to listen to, but everyone needs to hear.

Her claims have since been backed by Whitecaps Ring of Honour member Andrea Neil, as well as a joint statement from 13 former U20 women’s national team players. The claims from the joint statement were the most damning, and included numerous alleged specific examples of abuse, many of which were sexual in nature.

Whitecaps co-owners Greg Kerfoot and Jeff Mallett finally released a statement on May 1 – the first from the club to have someone’s name behind it – in which they apologized.

“We express sincere regret and empathy for the harm that has clearly come to many women who participated in our program at that time,” the co-owners said in the open letter. “The pain and suffering these women feel is real and something we care deeply about.”

While the letter was viewed more positively than previous public statements released by the team, clearly it hasn’t mended fences with McCormack.

McCormack wrote another blog post on May 2, calling for a face-to-face meeting and apology with the affected players by ownership.

“To answer a question that has been asked by many, at no point, as far as I know, have any of the players affected been contacted directly by any of the Whitecaps owners, including myself,” McCormack wrote.

Whitecaps ownership and executives have met with supporters groups on more than one occasion, but the fans haven’t been satisfied with what they’ve heard to this point.

“Despite the private meeting held with supporters, the communications from the Whitecaps have not changed since their May 1 statement,” the Southsiders explained on their website.

The Southsiders outlined three main reasons for the walk-out here:

“We are calling for the walkout, showing solidarity with the former Whitecaps and U20 National Team players who have come forward with their stories of abuse.”