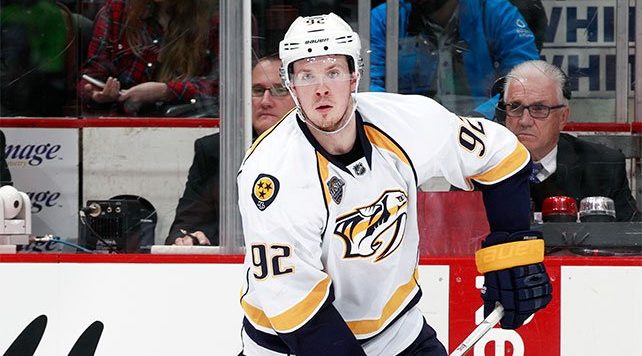 When I last spoke with Ryan Johansen last summer – for the site formerly known as Vancity Buzz – he was loving life in Columbus. The Blue Jackets’ franchise centre was coming off a career high in points (71) for a team on the rise.

After making the playoffs in 2013-14 for the second time in team history, the Blue Jackets missed the playoffs in 2014-15. Still, there was a lot to be excited about in Columbus. They finished the season on a 16-2-1 run and had a healthy Sergei Bobrovsky back in goal.

Then the Jackets started the following season 0-7-0 and fired head coach Todd Richards. By January Johansen was gone too, traded to the Nashville Predators.

So my first question to Johansen this summer was naturally: what the hell happened in Columbus???

“It was really wild, our expectations were really high, we thought we were going to be a contender for the Cup,” Johansen said. “But it just goes to show if you’re not ready to start and you’re not playing complete games, our league’s so good that there’s so many good players that make it challenging every night that if you’re not playing your best hockey, you’re not going to come out on top most nights.”

Johansen’s departure from Columbus coincided with the beginning of the John Tortorella era. No other player was caught in the crosshair, publicly at least, more than Johansen.

“Obviously we knew what he was about, we know he was an in-your-face coach,” Johansen said, speaking about what he thought when Torts took over. “When he first arrived we thought ‘alright, he’s won before, we’ve got a team we think we can win with, let’s go for it, let’s do our best here’. It didn’t work-out for myself, for whatever reason.”

To Johansen’s credit, he takes responsibility for what happened.

Johansen knew he was going to be traded about a week before the trigger was pulled when his agent gave him a heads up. He’s still visibly upset about how things ended with the Blue Jackets.

“There are a lot of good players on that team in Columbus, I still haven’t been able to put my finger on it why we struggled so much at the start of last season.”

Then he got his first multi-round playoff experience.

“I don’t think there’s any big secrets that you learn,” said Johansen, speaking about how to be a playoff performer. “It’s an 82-game season so you’ve got to manage your body, not take it easy or anything like that, but when it comes to playoff time, you’ve got to throw everything on the line. As you get older and older, if you don’t win, you’re wasting time.”

As a star player, Johansen had to fight through tight checking, physical play. He performed well for the Preds, scoring 8 points (4-4-8) in 14 playoff games. Nashville upset the Anaheim Ducks in 7 games in the opening round, but fell to the San Jose Sharks in the second round.

Predators GM David Poile clearly wasn’t satisfied with their finish, trading the face of the franchise, Shea Weber, for PK Subban in the offseason.

“There were no rumours or anything about that trade coming, so it was a bit of a shock for sure,” Johansen said of his reaction to the trade.

“He’s been there for 13 seasons, a captain, one of the better leaders I’ve ever played with. A lot of kids that grew up in that city and Tennessee that were introduced to hockey at a young age, he was probably their favourite player. All you see are Weber jerseys around the rink.”

Johansen knows as well as anyone, it’s business.

Ryan Johansen and Brenden Dillon are hosting the 2nd annual Potential Apparel Whistler Invitational August 5-7 at the Fairmont Chateau Whistler Hotel and Golf Course. Proceeds from the weekend will go to support the Make-a-Wish Foundation.

New this year is a raffle that you can enter online to win, among other things, a chance to see the Nashville Predators or San Jose Sharks home opener.

For more information on how to participate in the weekend, check out their website.