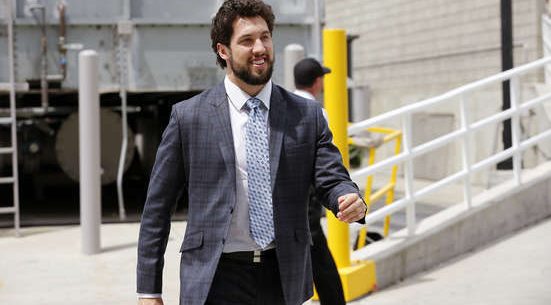 For Surrey’s Brenden Dillon, last summer was the culmination of years of hard work. The undrafted defenceman signed a five-year contract worth $3.27 million per season.

“Last summer it was really exciting for me and my family,” Dillon told Daily Hive. “I had a little bit of a contract thing (with the Dallas Stars) the summer before and obviously when you can have a few of years with a team that believes in you and a team that’s got a group of guys that’s slated to be together for the next couple of years, it was a lot of fun and I’m happy to call San Jose home.”

This had to mean a little bit extra for a player that was not only undrafted in the NHL, but the WHL as well. But the former Hope Icebreaker worked hard and eventually earned a spot with the Seattle Thunderbirds, and then the Dallas Stars.

“If I was to sit there and tell you before the season that we’d be playing for the Cup, I might have been lying,” Dillon said honestly. “For every team going into training camp that’s your goal, obviously, and I think as the season and the team came together, things started to fall into place and we knew we were starting to play good hockey at the right time and it was no easy task for sure.”

San Jose, a team with a spotty playoff reputation, changed a lot of people’s minds this spring.

The Sharks always had the talent, but a coaching change played a big factor in getting the group to click. Dillon gives Peter DeBoer a lot of credit.

“Coming in from training camp, he demanded the best out of everybody, but at the same time he knew when to ask for players’ input which I think, in this day and age, it’s a big part of teams doing well. For our group, we have a bit more of a veteran group… With as much as the Western Conference teams travel, I think it was something that you kind of have to have in the back of your head, days off versus practice. His style of play fit perfectly with us, we were a big, fast team and I think we were able to play that way for a majority of the season.”

San Jose went from underachievers that missed the playoffs the season prior to within two games of the Stanley Cup.

As fans in this city know, losing in the Final can be gut-wrenching. Undoubtedly it was for Dillon too, but he was able to put the Sharks’ run to the Final – his first extended look at playoff hockey – in perspective.

“Amazing, if you can chalk up one word… It almost seems like a regular season NHL game, there’s no nerves to that now.”

“I’ll always remember getting into Pittsburgh the first game, you’re getting into the hotel and you’ve got a hundred, hundred and fifty people booing you. It was like ‘wow, we’re really here’. It was crazy.”

Dillon clearly enjoys life with the Sharks – a team filled with fun-loving personalities.

Dillon lived with Brent Burns while he was having renovations done at his home, so he might have had a few other stories to tell, but he wasn’t telling them to me.

“There’s so many ups and downs, so many games, so many travel days, time spent away from your family, and whatnot that you’ve got to have a good group that you get along with. I think that was something that helped us this year, everyone wanted to play for each other.”

Ryan Johansen and Brenden Dillon are hosting the 2nd annual Potential Apparel Whistler Invitational August 5-7 at the Fairmont Chateau Whistler Hotel and Golf Course. Proceeds from the weekend will go to support the Make-a-Wish Foundation.

New this year is a raffle that you can enter online to win, among other things, a chance to see the Nashville Predators or San Jose Sharks home opener.

For more information on how to participate in the weekend, check out their website.