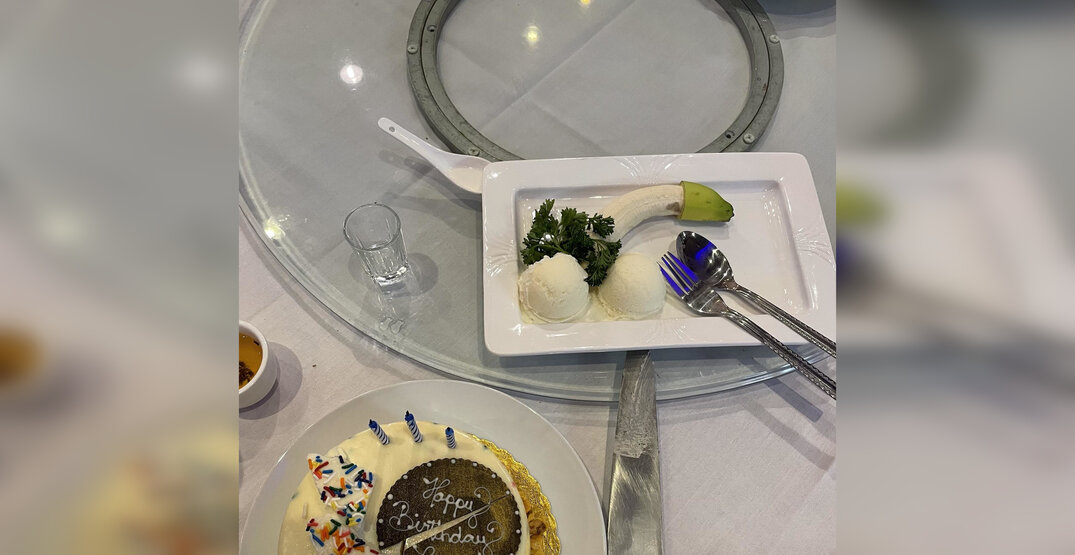 For over a decade, a woman and her family would visit a Chinese restaurant in Port Coquitlam for its good food and friendly staff. But after she was surprised with a phallic-shaped dessert during a birthday dinner with her family, she says, “I wouldn’t go there again.”

Reddit user Pancakesorwaffles8 posted about a bizarre encounter at a restaurant that left her feeling embarrassed and in shock.

Daily Hive spoke to the Reddit user and agreed to keep her name anonymous to protect her employment.

She explains, that she celebrated her birthday with family from the area and overseas. Her nearly 90-year-old grandmother, aunt, mother, brother and fiancé were all able to make it to her dinner celebration at the Wah Wing Szechuan Restaurant.

After dinner and a cake cutting, another restaurant staff member placed a dessert that was “very clearly a penis shape.”

The woman said she started to laugh out of shock because “I just couldn’t believe it.”

“I didn’t really know what to say, so I just kept on laughing. I didn’t want to end a birthday dinner with family on a bad note. I didn’t want to have a confrontation or have any sort of conflict. So I just laughed, and I tried to make light of the situation and I took some photos of it. I took photos with the dessert,” she explained.

In an interview with Daily Hive, the restaurant manager, Ben Wong, confirmed the incident and said this dessert has been served before and that some customers even request the “special dessert.”

“Normally, customers think it’s funny and are laughing,” he said.

After the waiter brought the phallic-shaped dessert, the woman claims the night escalated after he poured a shot of liquor for the family to share and poured himself two shots which he proceeded to drink.

To top off this dinner, the woman claims when her family was leaving the restaurant, the same waiter said, “Usually for birthdays, I would give the birthday girl or guy a kiss. But today I won’t because he (pointing to [her] fiancé) is here.”

“My mother and brother were so confused, and my fiancé bewildered,” she said.

She says these comments left her disgusted and repulsed.

“I think it’s kind of fair to say that in this day and age, you’d think that someone would know better not to say things like that.

“I think that’s incredibly inappropriate to say … I don’t think it’s appropriate coming from anyone of any age to any gender. Whether it comes from a male or a female to whatever gender, I think it’s incredibly — for lack of a better word — creepy. And to say that in front of like an entire family is really concerning,” the woman told Daily Hive.

Wong rejected this claim, adding that staff do not kiss customers, and said, “There is no way.”

The woman said she called the restaurant and spoke with staff to address her criticism. However, she said staff told her their only aim was to make their guests happy.

From what the woman has observed, a majority of customers dine with their families at this family-run restaurant. Because of this demographic, she wants to warn others of this possible surprise and is suggesting to the restaurant that they warn customers before serving this “special dessert.”

“I don’t want to be the type of person that causes a really negative publicity and wants to cancel people … but if this is what they want to … serve, then surely they’re free to … but please don’t surprise people with this.”

Wong said he is surprised to hear the complaint and how uncomfortable this encounter made one of his customers. But after hearing her concerns, the restaurant will make some changes.

“We only want to make a customer happy and have fun … Maybe we do too much [for] the customer. Next time we don’t do anything for the customer.”